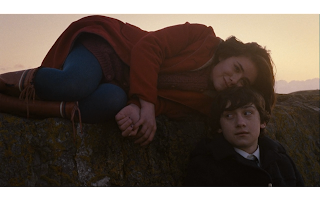 Okay, everyone. Time to put on a scarf, thick-frame glasses, and turn your record player on. That’s right, it’s time to get quirky.*

“Submarine” is a very Welsh film directed by someone who is distinctly English, with a distinctly English sense of humor. Funny, as it begins with a note from the narrator Oliver Tate (Craig Roberts) notifying the American audience that there is indeed a difference between being English and being Welsh. This is not the last time Oliver Tate will try and screw with your head in the most deviously playful way possible.

Watching “Submarine” is akin to watching a British Wes Anderson movie. Depending on who you are, this can be taken as a compliment, an insult, or something else in between. The film is filled with jabs of irony and self-awareness, yet thanks to the ideological protagonist, it mostly veers away from being pretentious.

Oliver Tate’s story is set in 1986. 15-year-old Oliver is a blend of Max Fisher, Antoine Doinel, and Alex DeLarge, minus the violent tendencies of the latter. Oliver seems to be a crafted response to these teenage anti-heroes, and his voiceover is of someone who is not aware that he is in a movie, but wishes he could be in one. At one point, Oliver imagines a small moment being captured in a zoom-in on film and low and behold, we get the zoom-in. Richard Ayoade may be credited as the director, but Oliver Tate deserves some of that credit as well.

Oliver may be precocious, but he is also like any character you would find in “American Pie,” as his foremost goal is to lose his virginity. But Oliver, who is probably too young to be this particular, won’t take just any girl. Oliver sets his sights on a girl who is neither the most popular nor the prettiest girl in school. Jordana (Yasmin Paige), like Oliver, keeps to herself. But she stands out in her bright red jacket, a change from everyone else’s drab uniforms. The color red has a big significance throughout, and with just one movie, Ayoade has already found a way to manipulate the small details on screen for his own advantage. 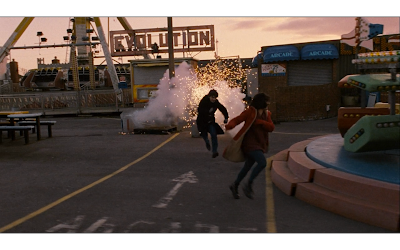 On the inside, Oliver is a hopeless romantic. Meanwhile, Jordana despises anything romantic. Oliver will only take her to the most decrepit places in town. Their dates, captured by Erik Wilson’s hauntingly beautiful cinematography, involve chaos and destruction. In Oliver’s head, everything is going perfectly between them. That is, until tragedy strikes in Jordana’s life, and Oliver is not there for her. She finds this an unforgivable betrayal and dumps him. Yet, he cannot forget about her. Then, Oliver is posed with one of the biggest questions involving young love: will it matter when you’re 38-years-old? Let’s wait until we get to that age to find out.

What differs Oliver from the lead of most high school movies is that he has to deal with issues well beyond what is important to the typical teenager. While trying to maintain his own relationship with Jordana, Oliver also takes on responsibility for his parents’ crumbling marriage. His mother Jill (Sally Hawkins) is falling out of love with her husband Lloyd (Noah Taylor). Lloyd, given the look of a depressed 18th century philosopher by Taylor, is a man who seems content not reaching his full potential. He is a brilliant marine biologist (probably not coincidentally, he was also in “The Life Aquatic”) who excels in research, but mumbles in front of a crowd. He likes everything to be predictable, and he feels no shame in revealing gifts before they are unwrapped. Oliver’s mother, meanwhile, may be having an affair with her former lover Graham Purvis (Paddy Considine), who is an even cornier motivational speaker than Jim Cunningham of “Donnie Darko.” Purvis adds on to the comedic edge of “Submarine,” and makes the movie into a slightly altered version of a plausible reality.

“Submarine” has a deep affinity for the ocean. Maybe it’s a Welsh thing, as the rugged shoreline sure is scenic. The ocean, very adeptly, represents everything that “Submarine” is about. The one fact Oliver remembers that Lloyd taught him about the ocean is that it goes down six miles at its deepest point. Besides that, there is not much more that we can know for sure. It is also probably symbolic for the subconscious, but even my own knowledge only goes so far.

The title of the movie comes from the idea that submarines operate at an ultrasound frequency above what humans can hear. One submarine can never know what the other one is planning or thinking. Oliver points this out. Yet, perhaps one of the biggest marks of immaturity is the constant need to contradict one’s self. In the memorable and darkly comic sequence in which Oliver imagines how everyone would react to his death, he believes he has it all down to a T. Maybe he does have it all right. Or perhaps, as he says himself, its better to be by yourself and think about how these things will happen then to actually experience them.

“Submarine” is really the story of Oliver coming out of his shell. The self-assured performances by Roberts and Paige give the movie the heart that it sometimes struggles to find. In a lesser movie, it would have been solely about him winning back Jordana and finding true love. But this is an above par Sundance entry that is about more than what is seen on screen. Here is a coming of age story where the character doesn’t even know if he came of age; all he knows is that he has grown older.

Here is a movie that is all kinds of sad and funny. It is never funny in the cliche, fall out of your seat sense, but rather in the satisfying sense that it has humorously captured a little trinket of life quite accurately. Alex Turner, better known as the lead singer of the Arctic Monkeys, is the movie’s Simon & Garfunkel: you feel like the songs could not exist without being a part of the movie, and vice versa. “Submarine” is one of the most aesthetically pleasing movies to come along in a while. It is like a cinematic museum composed of paintings and polaroids worth staring at for hours. While Oliver’s narration, which guides the story, can go all over the place and get out of hand at times, that is the way it should be. It is hard to say that any decision made by in the production wasn’t made for a reason.

While “Submarine” is rated R, I believe it is still suitable for any 15 or 16 year old to see. I probably shouldn’t be doling out advice to parents, but there is something wrong with how your kids have been brought up if they don’t swear words.


*If you feel the need to punch me in the face after reading the opening paragraph, then I would not blame you. 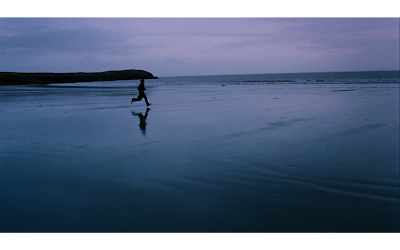