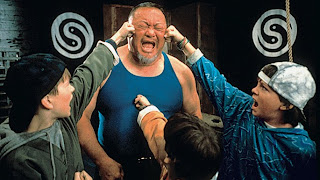 You know that feeling. You’re cruising through the channels and suddenly, you come across a movie. Maybe the game is on in 10 minutes, or you’re just in commercial break from [insert reality show that everyone watches here] and it’s that one movie that you’ve seen so many times. You can recite every line to it and yet, you can watch it again and again. Even though it has been on for an hour, watching it to completion feels necessary. I would like to present with you now my list of movies that I will watch anytime I find them on TV. Some have been acknowledged as masterpieces. Others, meanwhile, may have you questioning my credibility. Read the complete list after the jump.


“As far back as I can remember, I always wanted to be a gangster.” “Goodfellas” has what is, in my humble opinion, the most flawless opening a movie has ever had. It is exciting, hilarious, and most importantly, captivating. It gives you enough information to get into the world, but not enough so you feel the need to find out more. Once you’ve started it, you’ll just want to keep watching. Even after seeing it so many times, watching the opening again re-invigorates the curiosity I felt the very first time I ever watched it. Good luck changing the channel now.


The first two parts of the “Godfather” saga are over three hours a piece. With commercials, that puts both of them at close to five hours each. Once you’ve seen them, they are the kinds of movies you can pick up at any point and keep watching. AMC typically plays the first two movies every Thanksgiving, and “Arrested Development” marathons notwithstanding, I will always tune in.


This spot nearly went to “Pulp Fiction,” until I realized that it was time to set limits on how often that movie could be discussed on this site. As “Lebowski” gets better on repeat viewings, it is fitting that I will always want to watch it on TV the whole way through. Like any great Coen Brothers movie, there is always more humor to be found in scenes that you never thought could ever be funny. And while I usually hate the way that networks censor movies, the infamous re-dubbing of “The Big Lebowski” is the stuff of unintentional comic genius. Unfortunately, I cannot find the footage online, but just picture the phrase “f**k a stranger in the ass!” being replaced with the supposedly much gentler “find a stranger in the Alps” and the weirdly fitting, if nonsensical ,”feed a stoner scrambled eggs.”


The collective viewing public has seen “Anchorman” enough times that it can recite the whole movie by heart. While it is not as funny as it was to me years ago, I will still drop what I am doing and watch “Anchorman” whenever TBS makes room for it in its busy Tyler Perry-packed schedule. I speak for the whole world when I say, that sequel cannot come soon enough.


What has The Reel Deal come to? How do I begin with one of the AFI’s top 10 movies, and end with this throwaway family film from the 90s? It is hard to pinpoint one answer. Maybe because it brings back some very nice nostalgia. Or, perhaps it is still fun to shout “Rocky loves Emily!” repeatedly. While “3 Ninjas” contains plenty of the “nutshot,” perhaps the lowest point any comedy can sink to, there is something so infinitely watchable and hysterical about the break-in scene. I’ve laughed at it over and over again for nearly 20 years. When your film diet consists largely of foreign films, Martin Scorsese, and Charlie Kaufman, it is nice to have something like “3 Ninjas” to look back on, in order to keep your sanity and immaturity intact.

Editor’s Note: The 90s are underrated.
Share on Tumblr