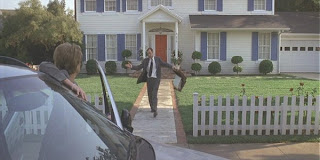 Well, I guess everything nice can go a little bad, too.

While watching this past weekend’s excellent new “Mad Men” episode “Signal 30,” I realized something that I should have understood long ago: Hollywood loves to hate on suburbia. The offsprings of cities have come to represent boredom and loss of youth, amongst other things. They can be purgatory or hell, depending on how you look at it. Even when they do look nice, there is usually some joke behind it. In front of the camera,  a suburban town never looks like a purely good place to live.

Let’s start with this week’s “Mad Men” and go back and around. This episode found the spoiled heir Pete Campbell (Vincent Kartheiser) going slowly insane in his new home in Cos Cob, Connecticut where, according to his wife Trudy (Alison “#AnniesBoobs” Brie), there are no bakeries or Greenbergs. As a Connecticut resident, I assure you that there are in fact an abundance of Greenbergs.

The biggest objection one might have to a bunch of white people being miserable in the suburbs is that they probably have a nice enough car and a big enough house to keep them happy forever. It is entirely possible even for even the privileged to have emotions. By taking Pete, who has just moved out of New York City, and placing him in a bedroom community, “Mad Men” revealed that the reason people grow weary of small town life is because nothing happens. Some people need the adrenaline of big city life, and not a backyard with a pool.

Perhaps the most well-known recent example of suburban angst is “American Beauty.” Lester Burnham (Kevin Spacey) is unhappy mainly because he has been rendered useless by both his family and his job. But he also seems to hate everything he owns, and these “things” are as useless to him as he is to everyone else. “American Beauty” does not suggest that every suburbanite is a miserable mess. The happiest and most together people in “American Beauty” is the gay couple. Perhaps that is because they have nothing hide, while everyone else seems to have so much to conceal. It is so easy to hide everything away behind a white picket fence. Filmmakers must think that city dwellers are less miserable because they are much more involved in the world they inhabit.

Even the portrayals of suburbia that seem positive are oozing with irony. The hilariously picture perfect Lumberton of “Blue Velvet” is just a front for violent perversion and creepy Roy Orbison impersonators. Same goes for the world of “Happiness,” where even the most stable family man can secretly be a child molester. In recent shows “Weeds” and “Cougar Town”* the orderly planned neighborhoods of Southern California and Florida are just made out of ticky tacky.

So maybe these examples aren’t saying that suburban life is totally terrible and you’re all spoiled rotten. The camera and the script are meant to capture hidden human truths, and a solid truth comes from the last line of “Some Like it Hot”: “Well, nobody’s perfect.” Everything that claims to be is just hiding some tragic flaws. Most suburbanites we see on the big and small screens are portrayed as prisoners: the men have been emasculated and the women have been tamed. Is this really what living in the country does to you, or is that just a part of getting old and having a family? That may be as difficult as asking whether the chicken, or the egg that needs you to pick them up at soccer practice, came first.

“Mad Men” did some good in making life outside of a metropolis seem half good: at least they acknowledged the fresh air and ample space. The most positive portrayals of the suburbs I have seen in film came from the eyes of teenagers living in very different eras: “American Graffiti” and “Dazed and Confused.” Maybe that is because teenagers are better at entertaining themselves. A life without commitment is definitely easiest. But then again, the 60s and 70s felt a lot more alive. There were still disc jockeys on the radio and small community theaters.

Big cities will always have that culture. Small towns are so prone to losing it. It is once that the uniqueness that makes us feel human has disappeared that suburban life becomes something negative. So Hollywood doesn’t necessarily hate your stupid suburb, it just hates how plain and monotonous small town America has seemed to become.

*Yes, I have seen “Cougar Town” and yes, it actually is not half bad.