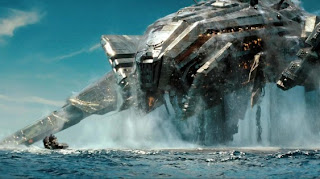 I’m still trying to get over the fact that the trailer nearly ruined one of my favorite bands (The Black Keys) for me. “Battleship” has been the subject of ridicule for well over a year now. It might cause the world to implode if it actually turns out to be good. Regardless, I see this movie making huge returns at the box office, and spawning even more movies based on board games. The only thing I could ever admire “Battleship” for is the fact that it turned a board game with light up pegs into a movie about aliens. That takes some very uninspired chutzpah.

There was a time when Adam Sandler was actually funny. And the fact that I wasn’t even ten-years-old at that time doesn’t matter. In my mind, “Billy Madison” and “Happy Gilmore” are still classics. Also, “50 First Dates” is underrated. But really, what has happened to him? He seemed to be making a turn into new territory with “Punch Drunk Love” until he instead decided to make “Jack and Jill.” I did not laugh or even crack a smile once during this trailer. “That’s My Boy” also stars Andy Samberg, the comedy superstar responsible for The Lonely Island as well as one of my favorite comedies of the past decade, “Hot Rod.” To both Sandler and Samberg: please start making better choices after you cash your checks for this movie.

I understand why so many sequels to “Ice Age” have been made. Studio executives want to make money and sequels to successful properties typically do just that. Turning movies into money is their job, after all. However, could they find some way to not give children such an inaccurate view of common historical knowledge? First, they suggested that dinosaurs existed during the Ice Age and now, they are doing the same with continental drift. This is why Pixar should be the only ones allowed to make animated movies.

Once upon a time, Tim Burton made original movies like “Edward Scissorhands” and “Ed Wood,” and not movies like “Charlie and the Chocolate Factory” and “Alice in Wonderland.” “Dark Shadows,” based off of the television show of the same name, is about an eighteenth century vampire (Johnny Depp) who ends up in the 1970s. That premise could be funny, but the trailer just seems to hint at a lot of jokes about disco and afros. Trailers have the tendency to be misleading, but “Twilight” has ruined vampires in the same way that Tim Burton has ruined Tim Burton. The only possible saving graces here are Chloe Moretz and Alice Cooper.

I can’t wait for the upcoming sequels “ROFL” and “YOLO.”