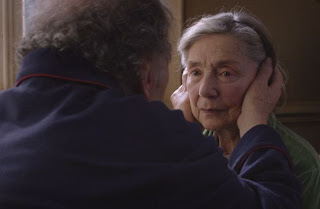 I may have left Cannes today, but the discussion about the Festival hasn’t ended just yet.


My last day at Cannes marked what might have been the most depressing double feature known to man.

After a cheery morning of “Angel’s Share,” I moved right along to Michael Haneke’s “Amour.” Austria’s Michael Haneke, one of the most provocative directors alive today, has once again subverted all audience expectations. “Amour” tells one of the simplest of stories in a complicated two hours that feels closer to four. It is slow and rewarding. While I believe that “Rust & Bone” or “The Hunt” deserved the Palme D’Or, “Amour” is a fitting winner.

“Amour” is the story of an old woman (Emmanuelle Riva) who is slowly, slowly dying as her husband (Jean-Lois Trintignant) struggles to take care of her. That’s about it. However, the unique part is how long this story is drawn out for. Haneke spares no details, which is what makes this portrayal so vivid and realistic. Every scene and every shot is stretched out longer than it ever should go in order to arouse discomfort. The events occurring in the world of the film feel so immediate because there is no escaping them and they have the choice to stay as long as they feel. As a film, “Amour” enters territory where it begins to transcend script and rise into the realm of pseudo-reality.

I see it now that Riva will hear her name called come Oscar nomination time for her heart-wrenching work. “Amour” is the kind of film I encourage everyone to sit through once, and no more. It is like a bad series of events that can’t be looked away from, and don’t need to be viewed again, as they are engrained so well into memory. “Amour” is at times unbearably slow, but if you know the premise, then you know what will happen in the end. So, why rush death?

Next: Thomas Vinterberg’s “The Hunt”

“The Hunt” is equally as upsetting, but in a very different way. I mean it when I say that it may be the best film of the festival, and I do not exaggerate when I say that it was one of the most intense film-going experiences of my life. Even the best of films can lose you at certain points. “The Hunt” grabbed me from the beginning and wouldn’t let me go until the end credits rolled.

“The Hunt” stars Mads Mikkelsen (better known for his villainous turn in “Casino Royale”) as Lucas, a good parent and upstanding citizen who’s life is turned upside down following a child’s accusation that she was molested by him. Everyone in town immediately believes the young girl, and Lucas is immediately turned into a social outcast. From there, his whole life eventually spirals out of control.

While watching “The Hunt,” I recalled this year’s Oscar winner for Best Foreign Language Film “A Separation,” in the way it unflinchingly questions what truth we are supposed to believe, as well as the overwhelming power of a lie. Another film it reminded me of (and believe me, I don’t use this comparison lightly) is “A Clockwork Orange.” Throughout “The Hunt,” there is still that sliver of doubt towards Lucas’s innocence. Whether or not he is innocent, it is impossible not to feel bad for the mistreatment Lucas faces because he is helpless. When someone can’t defend themselves, hitting them while they’re down is just cruel. Or, as the film’s overarching metaphor puts it, it is like hunting a deer when you have a gun and they have nothing. “The Hunt” is about Lucas turning from hunter to hunted.

Like “Amour,” “The Hunt” constantly plays with viewer expectations. Just when it seems to have that kind of ending where everything wraps up too nicely, the illusion is shattered. The main difference between America and European cinema is that while the former tends to give you everything you expected (there are many exceptions, of course), the latter hopes you leave getting the experience that you didn’t think you’d get.

If “The Hunt” ever plays in a theater near you, you would be doing yourself a favor by going to see it.