Well, the Festival officially begins tomorrow, but today, I got a good taste of what I will be taking in for the next two weeks.

I saw it all in the Palais, which is pretty accurately nicknamed “The Death Star.” It is an expansive place which has just about every theater where movies are shown. Most notably is the Lumiere theater, which puts every American multiplex to shame. The Lumiere is where the opening night screenings happen, and the stars walk the red carpet. It is where tomorrow night, “Moonrise Kingdom” will open the Festival.

What movies I will see, and when, is still a mystery. The beauty of film festivals lie in the unpredictability. You could be going to a screening one minute, and then end up in someone’s yacht party the next.

Even though the Festival has yet to begin, new things are to be learned just by looking around and listening. Perhaps the highlight of my day (I am still in awe from it all) was the hall of foreign movie posters lining the Palais. I would like to share a few of the highlights: 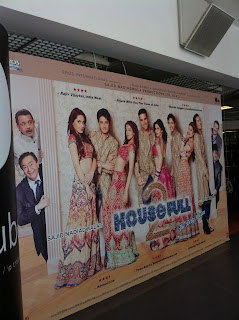 This is for an Indian movie. I’m not sure if the title is “House 2 Full” or “House Full 2.” If so, I still have no idea what this movie is about, and if it is either a Tyler Perry rip-off, or an Indian version of “Full House.” Either way, when does John Stamos show up? 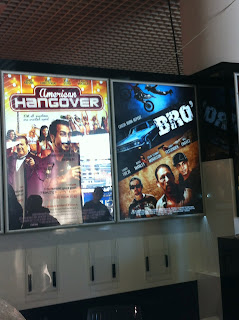 On display here are two equally fascinating displays of poster art. The one to the left is “American Hangover,” which looks like some kind of “Scary Movie” type movie. It stars Joey Fatone. Fatone is known by some as a member of NSYNC, by others as an actor in “My Big Fat Greek Wedding,” and by everyone as that guy who stopped being famous. The poster on the right is for a movie called “Bro” which stars Danny Trejo. I mention this movie both because Danny Trejo is awesome and because I am afraid he will track down and kill me if I don’t mention it.

Without seeing a single movie yet, I have already discovered some of the great mysteries of Cannes. And there are still more to come. Here is a set of goals I have for the rest of the Festival. Some of these goals may be hard to meet, but as a wiser man than myself (MacGruber) once said, “never ever say never ever.” (List after the jump)