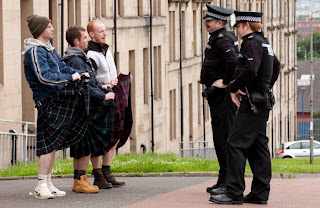 I can’t believe that today is the last day of the festival. I might need a little break from intense film marathons, but I wouldn’t complain if I was stuck in the south of France for the rest of my life. It’s very nice here.

The last day is reserved for repeats of all of the films in competition. I plan of an intense double feature of “Amour” and “The Hunt” later today, but I started the day off strong with Ken Loach’s “Angel’s Share.” Most films that screen during Cannes are not happy affairs. So it was refreshing to see a comedy in competition. This British film is light-hearted yet very smart. It’s shot like a drama, yet written like a comedy. It’s a caper about a group of bumbling criminals who try to steal a cask of rare whiskey. Hilarity ensues.

“Angel’s Share” is certainly different than what you will usually see at Cannes, as there is, in a way, a certain “Cannes film.” After watching enough of them, I can say that I’ve found a sort of criteria. Despite the prestige of Cannes, getting a film in the festival isn’t as hard as you might think.* Based on my observations, here is my criteria of how to make a Cannes Film Festival entry in five easy steps:

1. At least one, overly long, and awkward sex scene.
See: The Paperboy, On the Road, Excision, Rust & Bone

3. If it’s an American film, set in the South.
See: Lawless, Killing Them Softly, The Paperboy, On the Road (certain parts)

*Note: Getting a film into Cannes is not actually this easy.