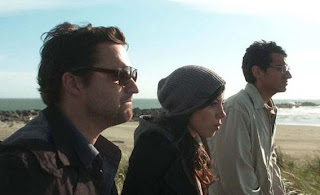 WANTED: Someone to go back in time with me. This is not a joke. You’ll get paid after we get back. Must bring your own weapons. I have only done this once before. SAFETY NOT GUARANTEED
It all starts with one of the greatest premises I’ve ever heard: a group of journalists investigate a classified ad stating, amongst other things: “Someone to go back in time with me.” No, the ad is not a joke, and while “Safety Not Guaranteed” is a comedy, it does not treat the subject matter as such. There is a big difference between being mean, and prodding delicately.
“Safety Not Guaranteed” is a Mumblecore film that is light on the mumbles. To call it a straight-up comedy would be a disservice. To call it a dramedy also wouldn’t quite be the right word. It falls somewhere else in between.
Aubrey Plaza plays Darius, who can be added to her collection of sarcastic, anti-social sad sacks. While I feel I should be tired of it at this point, like I felt with Steve Carell in “Seeking a Friend for the End of the World,” I strangely feel like this is the only role Plaza should be playing. Every time she plays a character like Darius, it is as if she is revealing some new layer of her true self.
But unlike, say, April Ludgate, Darius has a kinder air to her, and a darker backstory. She begins the movie explaining her life story, which mainly consisted of her being an anti-social sad sack as a result of her mother’s death. It turns out she is not just explaining this to the audience, but also to a man trying to hire her for a job. Needless to say, she doesn’t get it. Darius is also a hard-working intern for a Seattle magazine, where she can be seen lifting boxes and changing out rolls of toilet paper. One day, Jeff (Jake Johnson), an overly self-assured writer, spices up a brainstorming session by bringing out the aforementioned classified ad, and then suggests turning it into a story. Jeff recruits Darius and another intern, Arnau (Karan Soni), who is only interning for the magazine because he thinks that it will look good on his resume. Can any other Biology majors attest to this?
“Safety Not Guaranteed” starts off as a detective story mixed with an offbeat road story of mismatched characters. It doesn’t veer toward sappy quirkiness or cliche in either case. The investigation takes them to the town of Ocean View. Jeff, however, has another motive for this mission: to track down his high school love interest. With this second story, the title takes on another meaning. Safety is not guaranteed, as this movie does not suffer from the cushion of predictability.

We are not introduced to the man who put the ad out for quite some time, but it is well worth the wait. The investigation leads them to Kenneth (Mark Duplass). Duplass gives such a surprisingly warm performance despite never letting a smile come across his face. Kenneth, despite being a middling supermarket employee, also may or may not be a brilliant scientist who may or may not have discovered time travel. Now, “Safety Not Guaranteed” could have chosen any of the three leading men to be Darius’s eventual love interest (they all seem possible), and gotten three very different movies. With Jeff, it would have been a brief and regrettable affair. With Arnau, it would have been a quirky yet corny mismatched relationship. But with Kenneth, it feels just right. These two outsiders who couldn’t connect with people needed to meet each other in order to be able to face the rest of the world.
However, “Safety Not Guaranteed” isn’t simply about two outsiders connecting over loneliness. “Safety Not Guaranteed” is about what we would change in our past, whether we could actually travel through time or not. The answers are not so simple. At one point, one likable character will turn out to be hiding a very big secret, and a very big lie. The movie doesn’t ask you to forgive the action, but certainly it does ask to accept the very possibility of turning over a new leaf.
For a film with such a small budget, it certainly has great ambitions to be much more than it appears to be. This is fitting, as it is about people who aspire to transcend their rough edges. It sure packs a lot of change and development into just 84 minutes. It feels long, but that is because it is slow burning, not just slow. And while “Safety Not Guaranteed” is a comedy, it is not a comedy in the way that anyone would expect. The funniest moment in the film involves Plaza trying to re-organize a shelf of soup cans while trying not to look suspicious.
While “Safety Not Guaranteed” brings out the very best of its small ensemble, there is still a lack of closure in certain areas. I wouldn’t have minded if director Colin Treverow had tacked on a few more minutes to the running time. Jeff’s story arc didn’t feel totally resolved. Also, one big late story twist isn’t really given enough time to sink in, and there seems to be something of a rush to the grand finale. For a film that takes its time to tell its story, and often gets lovingly lost in images of sun-soaked beaches, this didn’t feel right.
However, the ending is a small-scale marvel. For a film with this small of a budget, one visual feat is particulary impressive. What is really nice about “Safety Not Guaranteed” is its optimistic outlook. Films of this kind tend to view everything with through a cynical lens. However, “Safety Not Guaranteed” is not about a bunch of hipsters forever mad at people who don’t get emotional while listening to The Shins with Natalie Portman. This film does not want to punish the audience for its patience. This is now, and probably will remain, the most inspired and inventive film ever to be made based off of a classified ad. I can only hope that that the events in “Safety Not Guaranteed” played out the same way in real life. For now, I will just have to live with the notion that fiction is often a lot more interesting than reality.
Share on Tumblr