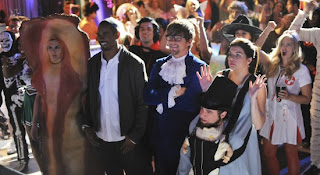 Emmy nominations came out this morning, and I’m celebrating them the same way I celebrate every awards ceremony: honoring those who didn’t get nominated! Yes, I understand at this point that these awards ceremonies are all politics, but it’s still fun to complain.


I am going to do my best to be nice and not call out any specific, undeserving nominations right here. Instead, you can all get right to reading my list of the most egregious snubs after the jump:


Perhaps the snappy, pop culture reference-laced dialogue was too much for voters to handle. However, in its sophomore season, “Happy Endings” defied all expectations and became one of the funniest shows on television. While so many shows have tried so hard to rip off “Friends,” “Happy Endings” instead became a part of the post-sitcom wave. It is also the rare showin which there is an argument for any character being the funniest character on the show. Maybe next year will finally be The Year of Penny.

A nod for Best Comedy seemed inevitable, and this snub is probably the most surprising one of all. While I still think that season three was best, wide consensus hailed season four of “Parks & Rec” the best in the series so far. And yes, it did hit so many high notes, both comically and emotionally. Season four took some big gambles, including leaving the parks department for some real world parody of the campaign trail. It is pretty incredible to see how far this show has come since its first season. What was once a spinoff of “The Office” has now taken on a life of its own, with the fictional town of Pawnee being just as funny a character as Ron Swanson and Tom Haverford have ever been.


I think it can be agreed upon by all “Game of Thrones” fans that Joffrey Baratheon is the most hated character on this show, and perhaps on all of television and film. However, an actor must be this good to make a villain so clearly evil, yet so compelling to watch. Joffrey’s most memorable scene this season involved two prostitutes. It is as painful to watch as it is hard to erase from memory. Gleeson plays it completely straight, never offering an ounce of sympathy to him. Seeing him get slapped in the face felt all the more satisfying.


Sometimes, when a comedy gives a standout side character more screen time, viewers come to realize that they were better in small doses. However, this is not the case for Jim Rash, who was worthy of carrying multiple episodes as the hilariously flamboyant Dean of Greendale Community College. In “Documentary Filmmaking: Redux,” he flawlessly channeled both Coppola and Brando. A psychotic director has never been this funny. He can also deliver every sexual innuendo he is given with more subtlety and cluelessness than irony. Sexual confusion hasn’t been this funny since Tobias Funke, but with his undying love for his dysfunctional community college, Rash secretly gives the show its heart.


Yes, this list gets two members of the “Community” ensemble. Since the Emmys decided to devote almost an entire category to “Modern Family” actors, I’ll call it even. The “Community” writers have altered Jacobs’s Britta Perry more than any other character on the show since season one, and Jacobs has perfectly kept up with the change. In fact, in one episode this season, Jeff (Joel McHale) says, “you seemed a lot smarter when I first met you.” Britta is the well-intentioned political activist of the show who is constantly wrong about everything. Jacobs is a great comedic actress because she seems willing to do just about anything, and she delivers every line she gets as if she is not thinking before she speaks. But for a truly great example of why she should have been nominated, look no further than “Pillows and Blankets,” one of the show’s top five episodes. In an episode that was supposed to be about Troy and Abed, she stole it with less than five minutes of screen time and not a single line of dialogue.

Note: There is no point in mentioning the “Community” snub in the Best Comedy category. I would pretty much be re-iterating what I said last year.


Let me end this on a somewhat more optimistic note: “Veep” and “Girls” are both getting the love that  they deserve. Louis C.K. got nominated for Best Actor. “Curb Your Enthusiasm” got nominated for what was possibly its best season yet. “Breaking Bad” cleaned up. “Community” scored its first nomination ever, and of course it was for Best Writing for the episode “Remedial Chaos Theory.”