Hushpuppy, the six-year-old protagonist of “Beasts of the Southern Wild” is more curious than precocious. It’s nice for a change to see a young lead who’s willing to learn more about the world as opposed to simply thinking they know everything about it. As Hushpuppy, newcomer Quvenzhané Wallis is, as many before me have already said, a force of nature. Such a label is not an exaggeration. I will say this now so I don’t have to repeat myself later: Wallis is on her way to becoming one of the youngest actresses ever to be nominated for an Oscar.

Hushpuppy grows up in that part of America that we often pretend doesn’t exist. The Bathtub, where Hushpuppy lives, looks like a slum in Mumbai. It is located in a part of Louisiana that is south of New Orleans. On one side of the levees lies a protected city made ugly by industry. On the other side lies The Bathtub, which is basically under water already. Hushpuppy and her father Wink (Dwight Henry) typically get around in a boat made out of a pickup truck. Bathtubians (is that what you would call them?) are a strong and resilient people who live off of whatever the land has to offer them, and make do even with the very little that they have. Indeed, they even learn how to fish without bait and tackle.

Hushpuppy’s mother died when she was much younger, and she has only her father to raise her. Consequently, she raised somewhat like a boy, with Wink always asking her to suppress her tears and show her strength (one of the funniest scenes involves her shouting “I’M THE MAN!”). Yet, all the suppression of tears cannot stop Hushpuppy’s true emotions, and her quest to find her mother (or at least, the spirit of her) guides her journey.

“Beasts of the Southern Wild” contains one of the most moving parent-child relationships a film has had in a long time. Of course when the hurricane strikes and gets stronger, Wink runs out into it to prove that he is stronger than it, as opposed to quelling his daughter’s fear. Walking in, I was expecting a tale of Magical Realism along the lines of “Pan’s Labyrinth.” However, “Beasts of the Southern Wild”is more about a young girl who has a lot to live for in her own life, but uses fantasy as a way to understand reality, as opposed to just escaping from it.

This is just too harsh and demanding of a reality to simply escape from. After all, what can you do when a hurricane is coming and you’re stuck on the wrong side of the levees? Something that struck me most about The Bathtub is that despite the extreme poverty, it seems like an amazing place to grow up in. Because it is cut off from the outside world, Bathtubians form their own rituals and traditions to guide them. The film opens warmly on a festival, rather than on a disaster.

The film, as mentioned previously, has a fantastical element to it. Early on, Hushpuppy learns in school that major environmental changes are coming, and that the only thing everyone can do is stick together. This is quite a tough lesson for a six-year-old to learn, it felt similar to when Max learned that one day the sun will burn out in “Where the Wild Things Are.” She also learns about the Aurochs, a giant creature that was once top of the animal kingdom during the ice age. Based on pictures I could find, the real Aurochs looked like cattle. The Aurochs that Hushpuppy sees looks more like pigs with horns. That’s fitting, as pigs are a common sight in The Bathtub. Hushpuppy’s fantasies don’t come totally out of her imagination, but rather as a kind of culmination of everything she sees. 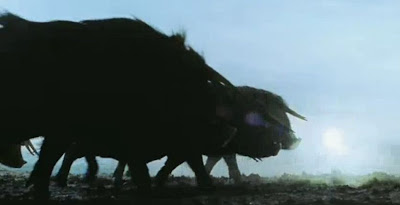 Hushpuppy is at too young of an age to be on a journey of maturity, but she is in the kind of environment where that kind of thing is forced to come about early. The Aurochs must symbolize her coming of age in some way I am still trying to figure out. That has been the part of the film has frustrated me and fascinated me most since I last saw it. I believe it fits in to Hushpuppy’s final words (which I am not spoiling, as they are in the trailer), that every piece of life is meant to fit together perfectly to create a whole of the gigantic universe. This might be known more commonly as the Butterfly Effect. If the Aurochs had never died, Hushpuppy could not have lived. The ultimate truth behind “Beasts of the Southern Wild” is that death gives way to life. That is a profound thing for a six-year-old to learn and to me, is sad, optimistic, and even beautiful.

“Beasts of the Southern Wild” is the directorial debut of Benh Zeitlin. At such a young age, he is already a visionary with an exciting career ahead of him. At times, it feels like he doesn’t even want to direct a story, but rather explore the lush scenery of the surrounding world. There are some very strange choices made by the characters. For instance, Wink at one point refuses medical treatment. Yet, Zeitlin never passes judgement when so much could have been. He becomes a true fly-in-the-wall in this very foreign culture that is right here in America.

I actually had the rare opportunity to meet Zeitlin while at Cannes. It was at the beach screening of “Jaws,” and I remember he remarked that “Jaws” was like his muse. I could see some of the influence rubbing off here. This is not a horror film, of course, but the scenes in which the locals talk with each other reminds me of the scene in “Jaws” in which the men discuss their scars. During conversations like this, it is as if both directors, usually very present, walked away for a few minutes, because they knew the magic going on between the actors could not be disturbed. For a director, knowing when to shut the f**k up is just as admirable a quality as knowing which angle to use at which moment. As the end credits began to role, the first thing I thought was that I could not wait until Zeitlin’s next film, whatever that may be and whenever it may come out.

For a film that is only 91 minutes long, “Beasts of the Southern Wild” tells an expansive story. After screening at Sundance and Cannes, Zeitlin’s film immediately captured the hearts of all who viewed it. However, I don’t know if a second viewing is enough. Another venture into the “Southern Wild” would be helpful, just so I can delve into the brooding images a little longer, and get lost in Hushpuppy’s delicately delivered voiceover.