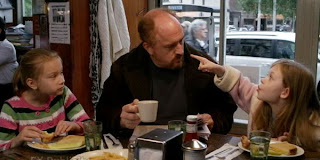 No one can deny it at this point: there is something wrong at the movies. Tentpoles and remakes just won’t seem to go away. A good movie feels like a treat that is too good for its own good. There is good hope when something like “Moonrise Kingdom” can find an audience. However, when even Batman can’t deliver, there must be a problem. However, one place I couldn’t find a problem this summer was on television. While film has already broken down so many barriers, TV is just figuring out how to do the same thing.

This summer (well, it’s been a long time in the making), cable and basic cable networks have nailed the formula down and created an entertainment experience that can sometimes rival even a great film. Now that everyone has a DVR box and access to the internet, shows can carry long stories in ways they never could in the past. Here are the shows that created a Blockbuster summer for the likes of AMC, FX, and HBO, amongst others:

I don’t know if there is much more that I could say about “Breaking Bad” that I haven’t said before, but I’ll give it a try. “Breaking Bad” is one of the best dramas of all time in any artistic format. It is like watching a never-ending tragedy unfold. However, that tragedy is peppered with breathless suspense, spurts of humor, and unforgettable characters. “Breaking Bad” is how the Coen Brothers would make a show if they ever adopted the format. It melds many genres together, perhaps hitting its most breathless strides when pulling off little heists, such as the great train robbery they pulled off last week. Even as one of their best characters (Gus) “left” the show, “Breaking Bad” recovered by giving more screen time to its very colorful side characters, including Mike and Saul. It has been said that this show is about a chemistry teacher turning into Scarface. However, I cannot tell whether or not this will end like “Scarface.” “Breaking Bad” is too good for that. And while I cannot wait to see how the fifth and final season will end, I wish it never would.

Television has now gotten into the adaptation business. “Game of Thrones” has secured itself a long run, as George R.R. Martin hasn’t even finished writing his “A Song of Ice and Fire” series of which this show is based. I have not read any of Martin’s books, but this show is all I need to be totally absorbed into the Westeros universe. “Game of Thrones” rewrote some of the basic rules of television when it killed off a key character in its first season. Now, it continues on its dark tone, as it is impossible to know who is safe and who isn’t. Season two saw Westeros expand, and some new fascinating characters were introduced, most prominently Theon Greyjoy. Meanwhile, old characters such as Cersei Lannister (Lena Headey) and Joffrey Baratheon (Jack Gleeson) were more evil than ever. In Westeros, that means they were more compelling, and more likely to have success. “Game of Thrones” continues to differentiate itself from all other entries in its genre through perpetual moral ambiguity. Every bad action can be somehow justified as right. Moral ambiguity is the root of good drama.

Best Episodes of the Season: Garden of Bones, A Man Without Honor, Blackwater

Here is yet another show that I may have said all that can be said about it. Yet, I cannot stop talking about it. This season’s was the best “Mad Men” has ever been. And this is a show that has won the Best Drama Emmy four years straight. Season five gave Don Draper (Jon Hamm) a new wife (Jessica Pare) and a new outlook on life. It took a trip on LSD, and then plunged into darker depths than it ever has before. Don Draper is a man who is too big for a movie, and “Mad Men” has been the perfect home for his development. “Mad Men” is an amazing character piece because it not only captures the period, but the people inhabiting it, the way it was meant to be.


Best Episodes of the Season: Signal 30, Far Away Places, At the Codfish Ball, Commissions and Fees

Only “Mad Men” could make a French song from the 1960s into a part of the current cultural lexicon.

This has actually been a fantastic summer for independent cinema, ranging from microbudget flicks (“Safety Not Guaranteed,” “Your Sister’s Sister”) to those that could connect to mainstream audiences (“Moonrise Kingdom”). A few months ago, if you were to tell me that one of my favorite shows on television would be a dramedy about the lives of four twenty-something girls trying to make it in New York, I would have scoffed, and then yelled at whatever “Sex and the City” rerun was currently playing on TBS.

But “Girls” managed to exceed all of my expectations. Lena Dunham, the show’s star and creator, crafted a world that is as welcoming as it is raw. It’s hard to be truly shocked by new content nowadays when all frontiers seemed to have been conquered, yet “Girls” continues to surprise in its explicitness, and its ability to find its voice and its realism in its most uncomfortable moments. Dunham is emerging as one of TV’s latest auteurs, with this very personal, semi-autobiographical series. True to its Mumblecore roots, “Girls” lingers long on scenes that could have ended long ago to great effect. The most memorable of these is a fight between two roommates which covers nearly eight minutes of screen time.

Executive Producer Judd Apatow said that he hopes “Girls” will teach men more about women. And it does just that, by not leaving its male characters to the side (Adam Driver, who plays Adam, became one of the show’s best characters). This season, Dunham also dared to answer a question that no one ever wanted to ask: what does Mrs. Weir look like naked?

Best Episodes of the Season: Hannah’s Diary, Welcome to Bushwick a.k.a. The Crackcident, Weirdos Need Girlfriends Too, She Did

Instead of remaking a British show for American audiences, HBO decided to steal a British mind instead (commence brain drain!). Armando Iannucci, creator of “The Thick of It” and “In the Loop” brought his hysterically uncomfortable and pessimistic view of politics from Parliament to the White House.

As Vice President Selena Meyer, Julia Louis-Dreyfus shows once again why she deserves to be known as one of television’s best actresses. She plays the exact opposite of the very popular Leslie Knope from “Parks & Rec”: she’s seen how the political machine works, crushing the ambition she once had. She is bolstered by a strong supporting cast, which includes Matt Walsh and Tony Hale (“Arrested Development”). It includes tough, stinging dialogue along with an edge of meanness that puts some of Sorkin’s walk-and-talks to shame. “Veep” nails it best in the little details. It never reveals Meyer’s political party, or the name of the president. Some of the funniest moments lie in the more mundane tasks of the vice president, such as highly publicized photo shoots. And yes, the words POTUS and FLOTUS are hilarious.

“Louie” is the kind of show that cannot be defined by just a few words. It’s star, writer, director, and editor is America’s best standup comic. Every episode is also a half hour long. However, calling it a comedy wouldn’t do it justice. “Louie” changes so much from episode to episode. One episode might involve a homeless guy being hit by a truck. The next episode could involve a boat chase. Or diarrhea in a bathtub. “Louie” has an element of surprise that has been absent from almost every movie coming to a theater near you. It’s ability to stray from formula so well makes Louis C.K. one of the most exciting filmmakers working today. The work he is doing on “Louie” reminds me of Woody Allen at his absolute best. But to simply compare him to Allen is unfair. C.K. is a unique and incomparable voice. This current season has carried on the gold standard he set up for himself in season two, and has yet to disappoint. This has been one of the most exciting shows I have ever seen without continuous story arcs. Because of “Louie,” every Thursday this summer was a highlight.