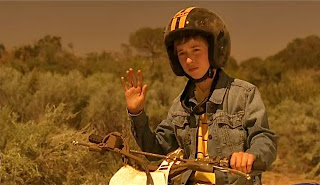 This week’s episode of “Breaking Bad,” entitled “Dead Freight,” once again proved that the show that is never bad just keeps on getting better.

Obviously, somebody had to pull out the Jesse James comparison once the only solution to the methylamine shortage turned out to be a train robbery. This is not surprising, as Walt is starting to believe more and more that he is Jesse James. Here is someone who will push it to the very end without the fear of death. Maybe it’s time something bad happened to him, something that will finally make Heisenberg cease to exist. And that final straw may have come loose tonight.

Each season of “Breaking Bad” reminds me of the Tortoise: slow to start, taking its time at the beginning, and then taking off and not stopping. Tonight was like the taking off point kicking things into high gear. This momentum should get us through the remainder of this final season.

In one of tonight’s first scenes, Walt paid an unexpected visit to Hank’s (Dean Norris) new office. Walt breaks down and opens up about his fears that he is not a good father and a bad influence, as Skyler (Anna Gunn) told him in last week’s episode. The fact that I bought it for a quick second shows either my naivety as a viewer or Walt’s now uncanny ability to fool others. Of course, it was a rouse, and when Hank gets up to get Walt a cup of coffee, Walt hastily bugs the place. As Heisenberg, Walt is no longer guided by a need to protect his family but rather as a need to keep his business going. As he notes in the preview for next week’s episode, he’s in the empire business. In season one, he talked about leaving his family money to survive long after he died. Now, all he wants is a legacy for himself.

The one thing that currently makes Walt and Hank similar is that they are both good at hiding information that the other has no clue about. There have been many subtle hints so far this season that Hank knows about Walt’s secret criminal life. Hank’s words of wisdom to Walt seemed almost strained. This could foreshadow that Hank’s kindness toward Walt was an act, as Hank is probably the only genuinely good character on the show. Look how good he was with Walt and Skyler’s baby. The “Breaking Bad” team is slowly, slyly building up to a showdown between Walt and Hank. Bloody or not, I’m sure it will be one of the most memorable moments in television history.

But let’s get back to the heist at hand. With all of the methylamine barrels being tracked, Walt, Jesse, and Mike needed to find the miracle chemical elsewhere. So Lydia (the basket case who might be the most irritating character in the show’s history) suggests that they rob a freight train where they can find all the methylamine they need. At first, it seems like a suicide mission. But then, Jesse comes up with a way they can rob the train and not get caught. And while it’s kind of insane, it actually works.

This season, Jesse has become the man with the brilliant plans. Walt always talks about leverage and in case Walt ever wants to dispose of Jesse, Jesse has this leverage over him: Walt has the crazy needs and demands, and Jesse has the plausible execution. In an earlier episode, Jesse finds an old test of his from when he was Mr. White’s student. The words “NOT APPLYING YOURSELF” were scrawled across it. Jesse may not want to be a criminal, but when he applies himself, he is actually a pretty good one.

This is not the first time “Breaking Bad” has taken form of a heist film. They did it earlier this season, when they absconded evidence using magnets. During season two, in one of my favorite episodes of the entire series, they staged a drug bust and hired a fake Heisenberg to go to jail for them. Now, they were using a broken down truck to stop a train. That works. The next step for them is to drain the train of just enough methylamine for them to start their new business, but not too much so no one would notice that any of it was gone.

I hope “Breaking Bad” keeps doing heist episodes every once in a while, because they show off the absolute best and worst of the characters, as well as the best of the creative team behind the show. By setting the stakes so unrealistically high, the characters must think in ways they would usually never think. While most heists onscreen usually unfold with the predictability of the plan, “Breaking Bad” always draws its heists out and adds in unexpected obstacles. In the aforementioned false-Heisenberg scheme, another bald man accidentally gets involved in the middle of the crime. In “Dead Fright,” the unexpected obstacle is Walt’s hubris, which becomes more frightening and unpredictable with every passing week.

Part of the robbery involved Vamonos Pest Control’s (this season’s Los Pollos Hermanos) Todd (Jesse Plemons) pumping water into the barrels as Jesse pumped methylamine out of the freight car. Meanwhile, Saul’s henchman (Bill Burr) blocked the train with his truck. Once the truck diversion can hold no longer, Walt still doesn’t have enough methylamine. Instead of settling for what he has, he insists that they keep pumping, despite the fact that Jesse is under the train and the train has started to move. We now know that Walt will sacrifice the people who care for him so he can get exactly what he wants. It’s not so much that Walt thinks he will get exactly what he wants, but that he will do anything for it. Surprisingly, this isn’t so different from the Walter White of season one. Remember the “I’ll do anything for my family” mantra? Well, now it’s just “I’ll do anything for myself.”

The second the phrase “train robbery” was mentioned, I got giddy in the kind of way that a twenty-year-old probably shouldn’t. John Ford would be proud of those stunning shots of the railroad slicing through the wide open desert. The cowboys of the old frontier would rob trains for money and any other supplies they needed to live off of. That is what Walter was doing. But then again, they could have cooked with cough syrup. Clearly, Walt is still a man who thrives off of the idea of danger.

Speaking of western motifs, the Jesse James comparison came up once again. A few weeks ago, Mike tells Walt, “just because you shot Jesse James, doesn’t mean you are Jesse James.” But with this train robbery, Jesse James comes back once again. If anything, comparing Gus to Jesse James and Walt to Robert Ford might make a little more sense. If “The Assassination of Jesse James by the Coward Robert Ford” taught me anything (besides the fact that snow looks pretty), it’s that Jesse James was still a hero despite being an outlaw, and even if his death would be better for the country’s safety, he would be missed by many. However, at this point I doubt that Walter White will be missed by anyone if someone pulls the trigger on him. If that was to happen, I am still betting that Jesse will take on the role of Robert Ford in this modern western folktale.

As the train passes over Jesse, barely missing him, I squirmed in fear that the show might off him in that moment. Because that’s how good “Breaking Bad” is: even when you know it’s not the right moment to kill a character off, you still get the feeling that any moment could lead to their demise. But after the robbery turns out to be a success, Jesse gets to yell “yeah, bitch!” This is his equivalent of a battle call of victory.

The celebration couldn’t last long. The episode began with a boy we never met scooping up a tarantula in the desert and then riding off on his dirt bike. Knowing this show, I should have known this was another instance of Chekhov’s Gun. The boy from the beginning appeared seemingly out of nowhere. Everyone on “Breaking Bad” has the ability to commit murder. Without a moment’s hesitation, Todd takes out his gun and shoots the little boy. Mike told them that every successful heist leaves no witnesses, but he never said what to do with children. It was a tragic moment, and one that brought Jesse to tears, while Walt just stood there silently. Past Walt would never have allowed that to happen. Next week, Heisenberg will probably conclude that it was “either him or us.”

“Dead Fright” ended with a very “Breaking Bad” shot in which the tarantula that the little boy had collected in a jar struggled to get out of the jar which lay next to the boy’s lifeless body. Perhaps it shows that Walt’s evil is becoming an inhuman force of nature itself, which drags in and kills anyone that gets in its way. As the tagline for “The Dark Knight” touted, welcome to a world without rules.

Side Observations:
-Anna Gunn is killing it this season. In earlier seasons, she got a lot of the same flack January Jones got on “Mad Men” after Jones’s Betty decided to kick her adulterous husband out of the house. Gunn’s Skyler was also faced with the tough choice of tearing her own family apart in order to protect her children. However, the difference between Gunn and Jones is that Jones has the personality of a doorstop. Gunn has gotten to show her true colors ever since Skyler broke bad. In season five, she is proving herself to be one of the few people who can stand up to Walt. She claims to be Walt’s hostage, but she acts like anything but that.
-Lydia tells Walt that there’s an “ocean of methylamine” on the train. Maybe I’m the only one who felt this way, but I was immediately reminded of Daniel Plainview (Daniel Day-Lewis) proclaiming, “there’s a whole ocean of oil under our feet, and I’m the only one who can get to it!” in “There Will Be Blood.” These two pioneers of the American West have a lot in common, including an unstoppable desire to build empires while putting their families at risk. Based on the flash forward that opened this season up, Walt is likely going to end up in a similar, lonely place that Daniel Plainview ended up in. In a perfect world, Paul Thomas Anderson will be asked to direct an upcoming episode.
-Once again, everyone was addressing Walt Junior (R.J. Mitte) by his old nickname of Flynn. This time, he didn’t seem too pleased about it, and it had nothing to do with the fact that he didn’t get to visit an omelette bar like I had wrongly predicted would happen this week. Perhaps the nickname was made to totally separate him from his father. The poor kid didn’t even understand why he couldn’t see his father anymore. When the secret finally comes out, I don’t think Flynn will be standing at his father’s side.
-Saul Goodman, who was absent this week, must have felt pretty left out. As the guy who always knows a guy, Saul is usually an instrumental part of helping Walt and Jesse get out of the messes that they create.
-Walt, Jesse, and Mike make an awesome team. Their dynamic is very clear at this point: Walt and Mike fight over who’s right, and then Jesse comes up with the idea that saves them. I hope next time Jesse comes up with a great idea, it is accompanied with one of the graphics that included a bunch of light bulbs and the word IDEA that used to appear on “Rocket Power” anytime someone thought of something.
Share on Tumblr