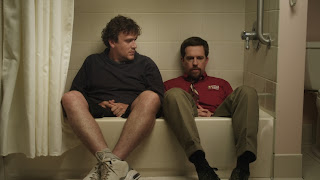 Finally, a slacker “comedy” where no one utters the words, “what are you going to do with your life?” Instead, there is a fair heaping of “get your ass of the couch.” I find this much more reasonable and realistic.

“Jeff, Who Lives at Home” is a nice film that’s also more than a nice film. It’s about a slacker, but it’s also about a hero. To my greatest surprise, this is a refreshingly irony free ride.

Jeff (Jason Segel) is 30 and still living in the basement of his parents’ house, which drives his widowed mother Sharon (Susan Sarandon) crazy. Jeff has but one simple task for the day: buy a new wooden panel for the broken door. Even this proves difficult for Jeff. While Jeff is a slacker, he certainly isn’t lazy. Let’s call him a very motivated stoner lost in his own little world.

The first words to come out of Jeff’s mouth, which are stated like a confession into a tape recorder, that he watched “Signs” again. Jeff finds meaning in it that no one else can. Jeff believes that the world is ruled by some sort of invisible cosmic order, and everything around him serves as a sign. It is a testament to how careful Jay & Mark Duplass are with their characters that this comes off as enriching rather than ridiculous. It is also important to add that this brief monologue is given as Jeff sits on the toilet, a private place that could fittingly serve as a suburban slacker’s confessional.

Jeff is the complete opposite of his brother Pat (Ed Helms). Pat is the perpetually angry, middle class office drone that can be found more often in a Mike Judge movie. Pat only gives off the appearance that his life is together, when in reality his marriage is falling apart. His wife Linda, brought to life with Judy Greer’s genuine pathos, feels neglected by her husband. He buys a Porsche when all she really wants is to go on one romantic date at a fancy restaurant. Pat refuses to be around those “snobs” even for a second.

The fact that the two brothers pair up on a quest on this irregular day turns out to be a coincidence. It’s the kind of coincidence that Jeff would claim has a greater significance in the larger scheme of things. While in his basement domicile, Jeff receives a phone call from someone who has dialed the wrong number (which basically seems like the only purpose that land lines serve nowadays) looking for Kevin. Jeff deviates from his trip to Home Depot and instead tries to find out who Kevin is. After running into Pat, Jeff and him witness Linda having lunch with an unknown man, and pursue them to find out whether or not she is having an affair.

Set in Louisiana, where the Duplass Brothers grew up, “Jeff, Who Lives at Home” is basically about ordinary people on an ordinary day, save for a few big twists. However, it would be a fallacy to say that nothing happens. Nothing is still something. A prolonged conversation about how to keep the love between two people alive can be considered the world on an insignificant day. “Jeff, Who Lives at Home” is really about one regular dude with big ambitions. Those ambitions do not exactly include starting a new life, but rather finding more purpose in his existence than there actually is. This fits the Duplass Brothers’ approach to filmmaking very well, as they always find that even the most mundane events can be turned into interesting stories.

Surprisingly, “Jeff, Who Lives at Home” is more drama than comedy. I guess I should have come to expect that from the Duplass Brothers at this point. They tend to use comedic actors even when the material bends towards something darker and much more serious. Perhaps they cast this way because the best comedic actors seem to be prepared for anything, and “Jeff, Who Lives at Home” constantly veers towards the unexpected.

Helms has played someone who is afraid of life (“The Hangover”) before, but he has never been this hard to root for since he first joined “The Office” as Andy Bernard and found ways to get on everybody’s nerves. At first, it is frustrating in how close-minded Pat is. Helms does well in keeping Pat  in a little delusional universe until fate crashes into him. Strangely, it is easy to root for him when he tries to win Linda back. When he sees that his wife feels no reason for them to be together anymore, he realizes every reason why they should be. Segel, meanwhile, gives one of his best performances to date. He turns Jeff into one of those people you want to have in your life not necessarily because they provide anything useful to you, but simply because they give you a more positive outlook on life. Jeff will surprise you more and more as the film moves along. He can be at once child-like yet also more mature than anyone else around him. While his sheltered lifestyle cuts him off from real human interaction, it also makes him less likely to hurt others intentionally. And when he is listening to others, you can feel that he is giving his full, undivided attention. People with no real problems tend to be much more helpful to those who do.

The hilarity of “Jeff, Who Lives at Home” lies in little moments that pack a big punch. In a testament to how vital the actors are, Segel’s height turns into a recurring joke. In one scene, Jeff can’t even hide behind a vending machine without the top of his head sticking out.

“Jeff, Who Lives at Home” is not perfect, and it never tries to be. There is something positive to be said about imperfection, and Mark and Jay embrace quick cutaways and blurring in and out of focus. They also don’t mind letting the camera run longer than it should, a technique that more directors should embrace nowadays. However, a big flaw that the film could have done without is Sharon’s story, in which she tries to figure out who her secret admirer is at work. This part of the plot isn’t necessarily bad, it just feels out of place in a film in which a series of random coincidences connect so well. It actually ends up being kind of intriguing until the big reveal.

“Jeff, Who Lives at Home” is filled with revelations that are surprisingly significant despite seeming so simple. By the end, Jeff is disappointed to find out that his destiny isn’t so unique after all (he is only half right). After some major occurrences, Jeff finds himself back in nearly the same place he was at the beginning. While most films of this nature would include a montage of clips of the main character righting a series of wrongs before their love interest finally agrees to take them back (see: “Knocked Up,” “Forgetting Sarah Marshall,” “Bridesmaids”), “Jeff, Who Lives at Home” decides to cut us off just as the change is about to occur. The Duplass Brothers like to do that (see: “The Puffy Chair,” “Cyrus”), but it’s never worked as well as it is here. Maybe just knowing that it happened is good enough. Maybe change isn’t about going to the gym or bring someone you love a bouquet of flowers. Maybe it’s just about doing something good without being told to do so.