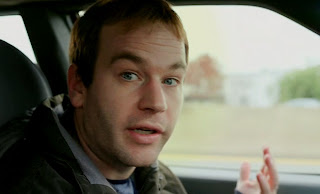 Even though “Sleepwalk with Me” focuses on bad relationships and near-death experiences, you may feel eerily comfortable. Mike Birbiglia reminds everyone in the first few seconds that we are watching a movie. He also tells us to turn our cell phones off. “Sleepwalk with Me” is like watching a very well directed standup special: the comedian will take you on this journey and no matter what is said, you will have to be on his side or get out.

Birbiglia’s life story is funny, interesting, and inspiring enough to have been turned into a one man show, podcast episode, book, and now a movie. The story has worked in every form. Birbiglia uses film to its fullest advantage to capture some of the best and worst parts of this time in his life, and he proves himself to be as skilled of a director as he is a writer and comedian.

“Sleepwalk with Me” is interspersed with monologues from Birbiglia as he drives around in his car. It has a similar effect to Woody Allen talking to the camera in “Annie Hall,” but here we get an even better sense of what part of his life he is in now. He’s well-rested, self-aware, and sure of himself. He basically tells us how we should feel about his own actions at crucial moments. This is a very nice cushion, as Birbiglia never tries to sugarcoat his own life story as others might be tempted to do.

“Sleepwalk with Me” is also an insightful look at a failed relationship, and would make a great double feature with “Celeste and Jesse Forever.” Playing himself under the alias of Matt Pandamiglio, Birbiglia manages to give himself a name that’s even harder to pronounce than his actual one. “Sleepwalk with Me” details the time in his life when he was struggling to make it as a comedian. After his younger sister gets engaged, he feels more pressure to tie the knot with his long time girlfriend Abby (Lauren Ambrose). All of the stresses and bad habits lead to sleepwalking. Sometimes, it is funny (“there’s a jackal in the room!”) and other times, it’s downright destructive.

Mike’s family, frequently the butt of many of his jokes, is a major part of the film. His mother (Carol Kane) is the kind of person who concludes her speeches with something totally insignificant. His father (James Rebhorn), meanwhile, is a little more emotionally distant. Yet, he can repeat every part of a conversation even when he’s all the way in the other room.

At one point, Birbiglia has to remind us that “we’re on his side.” Yes, he believes his actions were bad enough that he has to make sure that we won’t abandon him, and that is definitely one of the reasons we never do. “Sleepwalk with Me” isn’t about trying to justify one’s actions, it’s about growing as a person.  It is a coming of age story for life as an adult. A lot of his revelations truly feel like trinkets of wisdom. It is hard to do that and not seem trite. We witness the moment that he finds his voice as a comedian, and learns a great lesson (taught by Marc Maron in form of Marc Mulheren): being funny is about speaking the truth, not trying to make people laugh. It’s a fact of life that is often easy to forget.

“Sleepwalk with Me” dabbles towards the surreal in its dream sequences. Two of them are obviously dreams off the bat. However, one of the sequences is so well done that it took me almost to the moment that Birbiglia wakes up to realize that it was a dream. The whole sequence is silly, but not implausible enough to not be reality. And some of those moments when he wakes up to find himself reenacting his dreams are funny because they all actually happened. Once again, truth is always funniest.

Independent comedies tend to take the road of dry humor before turning into a drama in the third act. Many of them seem to be afraid to make us laugh out loud. Not Mike Birbiglia. If you followed Birbiglia before this film, then chances are you knew many of these stories, and have heard many of these jokes. But most of his jokes never get old, and seeing events we’ve only heard described acted out make them all the more funny and memorable. The only way to understand the uncomfortable feeling of someone’s first time doing standup is to actually see it. Describing a lip-synching contest is one thing, but showing a girl awkwardly mouthing along to the Backstreet Boys just can’t be topped.

I would venture to say that Mike Birbiglia is a brave man. He reveals large chunks of his life that most people would usually keep private. Not to mention, he has to reenact one of the most physically painful moments in his entire life. True to his comedian form, he even “zings” the doctor in the hospital. And when I say this film is inspiring, I mean it in the best sense of the word, and not in the Hallmark way. “Sleepwalk with Me” is essentially about a man who used to solve his problems by avoiding them and now solves his problems by confronting them. Being a good artist and performer seems to fall in line with this: to work well on stage and behind the camera, you must know what your voice is. And to know what your voice is, you must confront everything good and bad in your life.

Voice and vision are traits that a lot of filmmakers lack. With his first feature, Birbiglia announced who he is with clarity. Comedy buffs will enjoy seeing this behind-the-scenes look at the standup world peppered with many great cameos. Those who are unfamiliar with Birbiglia will find this a great introduction to his style of comedy. If there was one qualm I had with “Sleepwalk with Me,” it’s that Birbiglia didn’t include much of his relationship with his father, which was detailed to a much greater extent in the book. The sense we got is that his father believed he needed a “goddamn reality check.” In the book, it went much deeper than that, and the final part of the story in which the two of them open up nearly moved me to tears. But I think that can be saved for another time, as Birbiglia has so many great stories that will make for many more great movies.