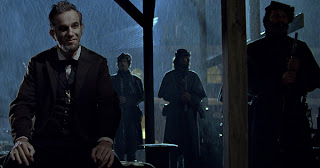 How do you bring one of history’s most famous and important people to life, when the only knowledge we have of them is from still photos and documents? Simple: bring in Daniel Day-Lewis. Not only can that guy act his way out of a paper bag, he would also spend an entire year studying the life of a paper bag in order to prepare for the performance.

“Lincoln,” however, is the first time I’ve seen Daniel Day-Lewis in a performance that doesn’t totally dominate every frame of the film. No, he is also guided by an impressive ensemble, who will surely take home the big ensemble prize at the SAG Awards.

Despite the title, “Lincoln” is about much more than the man himself. It is about the feelings of an entire nation during a very specific time, and how the actions of one Abraham Lincoln transcended the time he was living in. As Abraham Lincoln, Daniel Day-Lewis brings out a warmth and sense of humor that make him unlike any politician I could ever imagine. He always has the look of a man who will always stay firm on his beliefs. The film opens with Lincoln having personal conversations with a series of soldiers. This is the Lincoln we will see throughout: a man who just wants to hear out everyone’s opinion, and possibly make some people happy as well.

Give Steven Spielberg some credit for boldly making “Lincoln” a two and a half hour look at the 13th Amendement. This is no biopic about chopping down a cherry tree and then running for president. The limited time frame is tricky, yet it still manages to capture the best of this man by showing him as he goes through the most difficult time in his life.

Spielberg hasn’t made a truly great fantasy since 2002′s “Minority Report.” His other great strength lies in recreating history. Every little detail in “Lincoln” is so beautifully realized that you can see how much thought and research went into the making of it. It immerses you into 1860s America. Colonial Williamsburg this is not, as it vividly shows everything from the muddy streets of Washington to the dead bodies piling up in mounds in Virginia.

“Lincoln” is a rare film about politics that actually feels realistic. It takes us through the grueling process of getting a constitutional amendment passed. This time, it is the amendment that would eventually end slavery. Lincoln is not the usual president we see on screen who is exaggerated for entertainment purposes. He does not always have the right thing to say. Instead, he chooses his words wisely. I think that is partly what made him such an amazing public speaker.

One other interesting thing you will learn about Lincoln here is his voice. I always pictured it being loud and booming. If Daniel Day-Lewis is to be believed, he was much more soft spoken and down-to-earth. Everyone always says they want a president who they could sit down and have a beer with. I disagree. A president should be more like Lincoln: understanding of your needs, and able to have a conversation with you without being condescending.

I am used to seeing Day-Lewis totally dominate the screen in every role he takes. However, “Lincoln” is the first time I have seen him take a role that is more subdued. At times, he even manages to take a back seat to some of the other excellent actors. Most prominently, Tommy Lee Jones walked away with many of the scenes he was in as Thaddeus Stevens. His final scene is one of the most important and surprising in the entire film. Unfortunately, Joseph Gordon-Levitt does not get nearly enough screen time as Abe’s son Robert.

“Lincoln” is a Spielberg film, and like any Spielberg film, it cannot stray from sentimentality. In “Lincoln,” it’s not as bad as in, say, “A.I.” or “War of the Worlds.” However, it does feel a little bit thrown in here. It’s as if Spielberg thought that he had to prove to us that Lincoln was a good man by showing that he was a good father. Clearly, that wasn’t needed. However, I really did like the portrayal of Lincoln’s precocious son Tad. I have a feeling that Tad’s hatred of slavery might have helped propel Abe to push the amendment through.

“Lincoln” is complex, but not as dark as some of Spielberg’s past historical epics. This is his first one that is focused more on words than action. It is a bold choice and a risky gamble that I sincerely salute. However, because of this, the film is unnecessarily slow at times. Just because there are no scenes of action, it doesn’t mean that what is going on onscreen has to be boring. Take the scene towards the end which shows everyone in Congress voting for the amendment. What happens in our nation’s Capitol isn’t always very exciting, but this scene was brilliantly done. We all knew the outcome, but somehow there was still suspense created. That is one of Spielberg’s great gifts: to create the feeling of dread even when the outcome seems clear. I wish that the rest of the film could have been as compelling and exciting as this.

“Lincoln” is not necessarily made for everyone. It is the thinking man’s look at history, and the kind of film that will make history buffs go wild. There are many things I would have changed about it. I still feel it would have much more interesting had they opened with the time before the 13th Amendment was proposed, in which Lincoln wasn’t exactly pro-slavery. Everyone already knew what a great man Lincoln was, but I’d have like to see more of how he became the legend. I cannot change history, nor this film, so for “Lincoln” is, I believe it should be seen. It just requires something that many films don’t normally ask of us: patience.