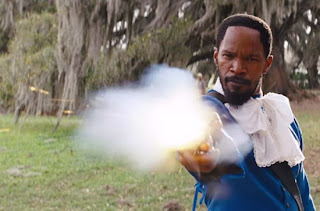 For any of you who think I have a severe Quentin Tarantino bias, let me just say that I disliked “Death Proof.”

Now that that’s out of the way, “Django Unchained” may have just stolen the top ten list of the year in one fell swoop. It may lack the audacious perfection of “Inglourious Basterds,” however this messy masterpiece is bold and brilliant in its own right.

“Django Unchained” rightfully opens with the theme music from 1966′s “Django,” a film that is similar with this Django only in name. This is the first time that Quentin has made a Western that actually takes place in the appropriate era and locale. This is not modern-day Los Angeles, Tokyo, or Nazi-Occupied France. This is Texas in the years just before the Civil War.

Django (Jamie Foxx), a quiet slave with a sharp tongue and a deadly grin, is freed by Dr. King Schultz (Christoph Waltz). Foxx is fantastically deadpan and unpredictable as Django. Unsurprisingly, Waltz displays his incredible way with words as the verbose dentist-turned-bounty hunter. There is a giant tooth on top of his carriage. I don’t why any of that is important, but it sure is funny.

Like Quentin’s other films, “Django Unchained” is less a story and more a series of cause and effect vignettes. Schultz at first frees Django because he is the one man who can help him identify and track down the ruthless Brittle Brothers, whom he is hired to kill. The mission allows Django to prove himself to be a great shot, as Quentin opens the doors of a slave revenge fantasy of the highest sort. As his career progresses, Quentin’s films have gotten bigger and more ambitious. During a stretch of the film that is surprisingly quiet on a Tarantino standard, “Django Unchained” takes a beautiful detour into the American frontier as Django and Schultz cross the country.

“Django Unchained” is also Quentin’s funniest film. A scene involving an attempted lynching by a proto-KKK group (which includes Don Johnson and Jonah Hill) quickly dissolves into pure farce. Even with all of the gruesome violence, what shocked me most about “Django Unchained” was all of the moments I found myself laughing and feeling giddy when I probably shouldn’t have. The film is full of comic moments framed around serious moments. Laughing at these demons helps remove their power.

More than any other of his past films, Quentin has challenged himself here, by making a film that takes place before movies. Without the cushion of his typical pop culture references, he goes to some new and interesting places. Surfer movies and Elvis are traded for The Three Musketeers and German fairytales as “Django Unchained” is a mashup of western, southern, and European legends. When Django asks Schultz to help him rescue his wife, Schultz remarks that the name of his wife, Broomhilda (Kerry Washington), is the name of a character from Germany’s most famous folktale.

Just when the film couldn’t get any more exciting, Calvin Candie (Leonardo DiCaprio), the Mississippi slave master who currently owns Broomhilda is introduced. Candie reminds me of the villain that Waltz played in “Basterds” but on a whole different level of delusion. DiCaprio, so good at conveying southern hospitality, making Candie seem like a kind and reasonable man even when he clearly isn’t. It is this charm that makes him even more terrifying. He hosts slave fights and doesn’t blink an eye when he orders the violent execution of a rebellious slave. There were many times I forgot that it was even DiCaprio in the role. In a perfect world, the Academy would just hand an Oscar over to him already.

Without the cushion of film, Quentin delves deeper into overanalyzing historical issues with excessive dialogue. Several scenes are so good, yet so dense, that I have to watch them again. His dialogue can explain simple things in such eloquent ways.  Without pop culture, you can see Tarantino’s dialogue for what it really is: a cross between indulgence and intellectualization.

Very few films have been made about American slavery. “Gone with the Wind” and “Roots” are the only ones that have truly stuck, and even those feel a little outdated. Even if it carries some extreme historical inaccuracies, “Django Unchained” is the most interesting and complex portrayal of slavery ever put out by Hollywood. Even when Tarantino intentionally overlooks historical truths, he does wonders with the details. Every costume and set is given so much loving and painstaking detail that I I felt myself becoming deeply immersed in the era. Tarantino shows the slave owners as white trash in fancy outfits, and their accompanying women are exaggerated southern belles.

And then there is Samuel L. Jackson as Stephen, an old slave who is also racist. This character totally topples the terrible archetypes in American fiction of the “Magic Negro” and the “wise, old black man.” Stephen has been Candie’s slave for so long and is so close to the man that one might argue that he believes that he is white. However, I think it is deeper than that, and it greatly shows why Tarantino’s history benders are so marvelous and so filled with depth. It is as if slavery rewarded those with loyalty by creating an immense fear of the outside world, and immense comfort on the plantation. Stephen is more than just an excuse for Samuel L. Jackson to curse and say the n-word a lot. Though, watching him do both of those thing is predictably entertaining.

“Django Unchained” does to slavery what “Inglourious Basterds” did to Nazis and The Holocaust.  It is also the most perplexing and entertaining film of 2012. Nobody combines high and low brow as well as Quentin Tarantino. Only in one of his films could a Mexican standoff segue into a conversation about racism and French culture. After 20 years as a filmmaker, Quentin still knows how to pull the rug out from under the audience. “Django Unchained” constantly change our opinions of who the bad guys are. It may not totally rewrite history or change the way movies are made, but it does go way past the point in which it should have ended, and then gives great reason as to why it does just that.

How I Rank Quentin Tarantino’s Films:
1. Pulp Fiction- Still Tarantino’s best film, “Pulp Fiction” is still as brazen and funny as it was when it first came out. This pop culture tribute has become an indelible part of pop culture.
2. Inglourious Basterds- Jews kill Nazis. Christoph Waltz is introduced to the world. History is rewritten. What’s not to love.
3. Kill Bill 1 & 2- Part one is a breathtaking action spectacle. Part two is the most emotional film Tarantino has ever made. Altogether it’s the film that kicked off my movie obsession.
4. Reservoir Dogs- The place where it all began. Still one of the best directorial debuts ever.
5. Django Unchained
6. Jackie Brown- This was not loved when it first came out, but it’s hard to follow “Pulp Fiction.” “Jackie Brown” holds up well on repeat viewings.
7. Death Proof- This is where Tarantino went a little off the rails. It’s the weaker half of “Grindhouse.” This ode to trashy cinema forgot to be fun.