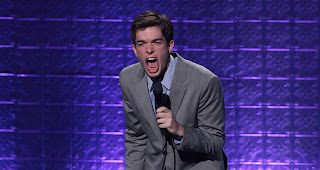 My interests have taken me in a weird, unexpected place in the past few months. Since last summer, I have found myself greatly exploring and obsessing over comedy. It is something that I’ve always liked my whole life, but never thought I could actually see myself becoming a disciple of. But after an improv class and a few shots at standup at various open mics (they are hard to come by in Upstate New York), that is starting to change. I find quotes from Louis C.K. floating around in my head as often as lines of dialogue from “Pulp Fiction.”

Many believe you can’t overanalyze comedy too much. This is true. Sometimes, you can’t explain laughter. However, I believe you can mine out deeper meaning in comedy. Stand-Up began to change in my eyes as I began to watch and listen to entire albums. The more you do that, the more you pay attention to themes and transitions as well as jokes. Here I have a list of five stand-up specials from this year that shocked me, moved me, made me think, and most importantly made me laugh uncontrollably:


Like the great show he once wrote for (“30 Rock”), Hannibal Buress is a joke-spewing machine. “Animal Furnace” is Buress’ second hour-long special, and his next leap into becoming one of the funniest people in America. Buress has honed his act beyond just a lot of jokes and he proves that he is a fantastic storyteller. He mocks himself a lot for being overly angry about a lot of issues that don’t matter, but the first few tracks have some pretty thorough takedowns of TSA agents and a bunch of cops in Montreal who gave him a ticket for jaywalking. Then his beat-by-beat commentary on an article written about him at a college that he performed at shows that he would make a great roastmaster. Many have compared Buress’ voice and delivery to that of Mitch Hedberg. It’s an apt comparison: Buress can pick apart the mundane and make it funny in ways you never imagined.

4. The Special Special Special (Maria Bamford)
If I ever meet Maria Bamford, I’d like to give her a hug, because she seems likes the nicest person imaginable. She’s also one of the funniest and most original comedians of our time. Bamford’s latest special, appropriately and hilariously titled In “The Special Special Special,” Bamford doesn’t perform in a theater, or even a comedy club, but rather in her own home, with an audience made up of only her parents. I have never seen stand-up so dependent on the audience’s reaction. Bamford goes through her usual manic routine of impersonations, which is made even more awkward by the fact that the targets of much of her ridicule are sitting right in front of her. Then, Bamford goes into darker territory than ever before, as she chronicles her ongoing battle with Depression in a way that is both funny and inspiring. In a few meta moments, she completely stops the show so she can go to the bathroom, take cookies out of the oven, and give her beloved pug his medicine. With her stand-up, Bamford invites us into her brain. With “The Special Special Special,” she invites us to be a part of her life. Buy it here

See the top 3 after the jump:

“Hello! I have cancer!” That’s how Tig Notaro opens up her set that accidentally became legendary. Notaro was scheduled to open for Louis C.K. at Largo. She was supposed to open with a half hour of her usual material. Instead, she takes her audience into a dark and brilliant trip into the tragic past few months of her life. C.K. was so moved by it that he posted it on his website. “Live” is exactly what comedy should be, but rarely is: raw, honest, and uncomfortable. Sometimes, it’s hard to know whether to laugh or shutter at Tig’s jokes, but it’s so inviting because she feels just as uncomfortable as the audience. The half hour is as dark as dark humor can get. Tig chronicles a rough few months in her life which include a brush with death, cancer diagnosis, and the death of her mother. Most of her jokes seem improvised, and she feeds off of the audiences reactions like a master. At one point, she asks if she should cut out the tragedy and tell the jokes she originally wanted to. The audience objects, with one member shouting, “this is fucking amazing!” Indeed.
2. Mr. Universe (Jim Gaffigan)
Jim Gaffigan begins “Mr. Universe” by saying, “oh, he’s doing that voice already?” in his trademark audience member voice. This is exactly what “Mr. Universe” is: Gaffigan takes the routine he has worked so hard to established and brings it to the next level. Here, he is funnier and more insightful than ever. He has a nearly genius monologue that both lampoons and defends McDonalds which turns his love of food into a social statement. Gaffigan also ventures into some new territories besides food. He also wonders why people ignore how gross hotels can be and then he breaks down why it sucks to go on vacation if you’re a father. These turn into more than just silly observations because there is meaning to them. But of course, some musings are there just to make us laugh (see: his joke about whale’s blowholes). Gaffigan is the rare comedian who can be accesible to a large crowd without pandering.
1. New in Town (John Mulaney)

John Mulaney is a comedy prodigy. He’s been participating in sketch groups and stand-up since he was a child. That is why, even before the age of 30, he has been able to establish himself as one of the funniest people working in comedy today. “New in Town” may only be Mulaney’s second special (after 2009′s overlooked “The Top Part”), but he shows off the comedic skills of an old pro. Mulaney is a master at blending sharp observations about Jewish women and 13-year-olds with long stories that never get dull. Wit and buildup have never gone together so well. Mulaney brings us into his world of pop culture obsessions which may not be timely, but as his act projects, he is the guy on stage so he gets to talk about whatever he wants. Indignation over “Home Alone 2″ and jokes about “Law & Order” never get old, but Mulaney is at his best when he’s being self-deprecating. Anyone who was ever bullied in their life will sympathize with Mulaney’s tales of being bullied as a child for looking Chinese (“Daddy, today I met a boy with no eyes”) and sounding like a woman (“I had a voice like a little flute”). Unlike a lot of comedians, Mulaney veers away from being cynical, even when he’s tackling his demons such as his past drinking problem, which he discusses with the story of a high school party gone spectacularly wrong (one word: “Scatter!”), and his anxiety, which culminates into a hilarious doctor’s visit gone wrong that I dare not spoil for you. Even with all its sillines, “New in Town” is a meaningful and infinitely rewatchable hour of comedy about the weirdness of adult life as seen through the eyes of someone who views himself as a “tall child.” As Mulaney gets older, his stand-up will get better and better. I just hope he never feels the urge to actually grow up.
Choosing one bit to represent all of “New in Town” was nearly impossible, but I went with this one because it uses the phrase “playfully anti-Semitic.”
Share on Tumblr