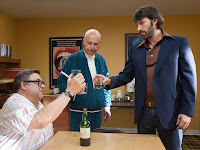 Who knew that Ben Affleck’s Oscar snub would be the best possible thing for him? Ever since his name was not included on the Best Director list, Hollywood has rallied around “Argo.” Lately, I have been rooting for Affleck, because I love a good redemption story. However, the fact that Affleck still doesn’t have an Oscar isn’t as bad, considering Scorsese just won his first one less than a decade ago. Affleck is still young and he has a long career of Oscar nominations ahead of him. But that won’t stop the Academy. “Argo” is a good, old-fashioned thriller about Hollywood. And if Hollywood loves anything, it’s congratulating themselves. Expect “Argo” to be the first film since “Driving Miss Daisy” to win Best Picture without a nominated director to accompany it.

“Life of Pi” was lauded nearly across the board for its visuals. “Amour” is a critical favorite and Haneke could score a surprise win from that. But I doubt it. Spielberg certainly doesn’t need any more praise heaped his way. However, that won’t stop Spielberg from winning this year for bringing an era to life with precise detail. This will be Steven Spielberg‘s third win for Best Director. I don’t think it will be long until he gets a fourth and ties John Ford’s record.

There are some fine performances in this category. Any other year, Bradley Cooper would have walked away with the award. But when Daniel Day-Lewis is nominated, no one can compete.

This race started off as a duel between Jessica Chastain and Jennifer Lawrence. For a while, I thought Chastain had it in the bag for her challenging and commanding performance in Zero Dark Thirty. There is a slight chance that veteran Emmanuelle Riva could score a late-in-life sympathy vote. This race though seems like a clear victory for Jennifer Lawrence. Lawrence may only be 22, but she is one of the most likable stars working today and her performance in “Silver Linings Playbook” was so good that she even took Robert De Niro to school.

Tommy Lee Jones held his own against Daniel Day-Lewis in “Lincoln,” which is no easy task. Alan Arkin was a joy to watch in “Argo” as always, but he just won a few years ago. Seeing Christoph Waltz win again would be great, not only because he’s a terrific actor but also because that guy can rock any stage he steps on. This is the toughest race to call, but I think I’m going to have to settle with Robert De Niro in “Silver Linings Playbook.” There’s nothing wrong with honoring a good, heartfelt comeback.

No analysis needed. Anne Hathaway (for “Les Mis,” not “The Dark Knight Rises,” in case you were confused) has this one in the bag.