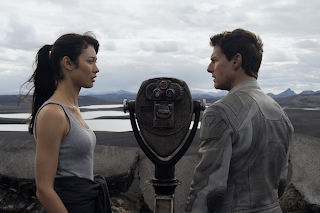 “Oblivion” begins with a voiceover describing the end of the world. Tom Cruise, who once again plays a man named Jack, delivers a bland monologue, which works much better when it is explained in a scene later on. Jack, along with Victoria (Andrea Riseborough) are part of a “mop-up crew” who stay in a swanky apartment (as described above) and are assigned to patrol what remains of Earth. Writer-Director Joseph Kosinski decided to hit Earth with a whole array of disasters: aliens invade, the moon is destroyed, and earthquakes and tsunamis tear the world asunder. The best thing that can be said about “Oblivion” is how striking and well thought out the world looks. While the set design is stale, the world is well detailed. The creative minds behind this film certainly spend a lot of time thinking about the end of the world.
However, if the film’s poster reminded you a lot of “I Am Legend,” that’s because the two films are a little too close for comfort. “Oblivion” feels like a mash up of a lot of sci-fi films, both great and mediocre. The film’s main villain (or at least I think it is, more on that soon) evokes a much less frightening version of HAL from “2001: A Space Odyssey.” Also, the film’s use of paintings and old texts for blatant symbolism felt like “The Book Of Eli,” another post-apocalyptic film with a lot of problems. “Oblivion” is derivative of films that were derivative of other films.
While people like to give Tom Cruise flack, there’s a reason the man became so big in the first place: he is an incredibly talented actor who can take on Spielberg blockbusters and Cameron Crowe romances. At his best, Cruise can feel like an everyman even though he is clearly a movie star. At his worst, he is distant and unemotional. The latter describes his performance in “Oblivion.” While he is supposed to be a cold, highly trained killer here, he didn’t even make sense as that. For somebody with such a haunted and confused past, it clearly didn’t seem to bother him at all.
The biggest problem that “Oblivion” faces is a script filled with stilted dialogue and underdeveloped characters. Just look at the Morgan Freeman. He comes in, almost saves the movie, and then disappears again for an hour. They say that a movie is as good as its villain. Jack and the resistance spend most of “Oblivion” fighting a bunch of orbs that shoot things out of them. And that’s about it. There are no confrontations or motivations to create intrigue or raise the stakes. A better villain probably would have made “Oblivion” more entertaining.
The film’s villain problem highlights the real issue of “Oblivion”: it’s just plain boring. The action sequences have absolutely no life in them. With all of the money spent on this film, couldn’t there have been a little more life injected into them? Every battle feels like it was won with no difficulty at all. The director seems to enjoy taking every convenience possible whenever a storyline can’t work out (for example: Jack’s bike breaking down).
“Oblivion” is set to a score that sounds like the “Inception” soundtrack mixed with the music from those Carnival Cruise commercials. This is just a small example of the film’s inability to both find the right tone and faithfully pay tribute to the much better films than it rips off. I really wanted to like “Oblivion,” because every original sci-fi film that Hollywood produces is a mini blessing in disguise. Maybe it sold because it wasn’t so original after all. What “Oblivion” lacks is spirit. You could get a lot more entertainment out of watching a group of five-year-olds reenact their favorite scenes from “Minority Report.”
Note: There are multiple story lines that I didn’t get into. That is partly because I don’t want to spoil anything, and partly because I had barely any idea what was going on at all during this film.
If You Don’t Want to See the Watered Down Version, See the Original: Moon, Source Code, Minority Report, 2001: A Space Odyssey, Inception, Cloud Atlas, Looper 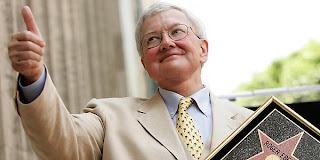 Only Roger Ebert could put this sentence into a review and still sound eloquent as hell.

Just a few days after announcing a leave of absence to deal with his ongoing battle with cancer, Roger Ebert died today at the age of 70.

I never had the chance to meet Ebert. However, for much of my life, I saw him as a mentor. I basically grew up on the many reviews that Ebert wrote. While Ebert is probably best known for patenting his own thumb for reviewing purposes, what he should be better known for is his incredible writing ability. I didn’t agree with him a lot of the time, but it was hard to walk away from a review without thinking “okay, there is no way to dispute anything he said.”

Often, Ebert’s reviews were more entertaining than the films themselves. He could describe a scene from a good film in a way that totally made me rethink how I watched movies. He could deconstruct a bad film to such an accurate degree that it would eventually be hard not to burst out laughing. He knew when to be incredibly serious and when to insert his beautifully crafted wit.

Ebert also reinvented what it meant to be a film critic. He was the first film critic to win a Pulitzer Prize for Criticism for good reason. In the Rotten Tomatoes era, certain critics (I’m looking at you, Peter Travers) are just looking to get write the best quote that will get put up in the next advertisement. Ebert didn’t write superlative reviews. Sure, his reviews instructed you on whether or not to see a movie. However, his reviews were also just as, if not more, helpful to read after viewing said movie. A Roger Ebert review was more than just an expression of liking or disliking something. Ebert put a little piece of himself into every review he wrote. Even if it wasn’t explicit, you could tell from a review exactly what his viewing experience was like. Ebert was one of the few critics who seemed to understand what a subjective experience watching a film was. And even when he attached stars and thumbs, he acknowledged that they were not absolute.

Ebert showed that the critic could be just as important of an artist as the filmmaker was. After he lost his voice, he lost his show. However, that didn’t stop him from writing. In fact, it made him better and even more prolific. During his long battle with cancer, Ebert branched out and wrote political essays, a biography of Martin Scorsese, and a memoir. Yet, the reviews will always be the greatest part of his repertoire. Roger Ebert taught me both that good criticism breaks away from the usual review structure. Most importantly, he taught me that having an opinion was about more than using the words “love” and “hate,” and that having an opinion could be turned into a funny, eloquent, and masterful piece of art.

Some Of My Favorite Ebert Reviews:

Garfield: A Tail of Two Kitties