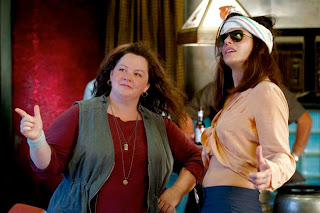 Most buddy cop comedies are about to mismatched cops who can’t follow the rules. But what if the movie itself, can’t even follow the rules? “The Heat” proves that the results are dangerously and potentially hilarious.
While “The Heat” is a buddy cop comedy, I’d say it’s more like “Superbad” than “21 Jump Street.” However, the buddy aspect is more important than the procedural part. Ashburn (Sandra Bullock) and Mullins (Melissa McCarthy) only follow the buddy cop formula slightly. Sure, the movie teams up a brash cop with an uptight one, yet neither of them really play by the rules. Ashburn is something of a detective prodigy, but she’s maligned by most of the people she works with. You know someone is lonely when they have to steal their neighbor’s cat for company.
Mullins, meanwhile, is equally good at sniffing out criminals, she’s just a little worse at keeping them from escaping. She may be is insanely over-the-top, but this is a role that McCarthy was meant to play. She gives it just the right amount of heart and never seems irritating.
Bullock and McCarthy have a dynamic, almost natural chemistry together that I certainly did not expect. If the two of them didn’t work well together, the script would have felt flat. It is clear that the two of them are not just partners, but growing friends.

Let’s back up for a moment. This is a comedy first and foremost. And on that, it delivers in every way possible. A large part of comedy is about debasement, and both lead actresses of “The Heat” are more than willing to get down and dirty for laughs. The bad thing about most action comedies is that they often put all of the jokes in the first half and then get weighed down by serious plot in the second half. “The Heat” never loses its comedy momentum, and it brilliantly adds comedy to some of its most tense scenes. I challenge everyone to make a stabbing scene as funny as one that happens in “The Heat.”
“The Heat” is an example of perfect harmony between the three parts of the Holy Trinity of any movie: Director, Writer, and Actors. The writer lays out the blue print, the director brings the blue print to life as he or she sees it, and the actors bring meaning and humor to the words. With “The Heat,” TV writer Katie Dippold (“Parks and Rec”) makes a seamless transition to the big screen. After this movie, she will be one of Hollywood’s most sought after screenwriters. She brings over her expertise from TV by bringing life to an entire ensemble, as opposed to just two characters.
Her style works perfectly with director Paul Feig’s. Feig always enjoys letting the camera run so he can capture an honest moment. While many scenes go well beyond their natural breaking point, they rarely feel unnecessarily long. The more a scene builds, the more we learn about the characters. Dippold’s strong ear for dialogue perfectly aligns with Feig’s ability to capture “real” moments. I hope to see more movies from this creative team in the very near future.

Just like any good script, “The Heat” is all about the buildup and the payoffs. Mullins never curses throughout the movie, only saying “what the F” whenever she can. So you can guarantee that when she finally does drop a real f-bomb, it’s going to be worth the wait. Even with all the humor (a lot of it deriving from improper use of knives), “The Heat” leads to a surprisingly moving conclusion.
“The Heat” amounts to a whole lot of riffing. However, what keeps it from being nothing more than a two hour gag reel is that it is stringed together by a pretty decent plot. While I didn’t care that much about who had the drugs and whatever, every character is well developed enough that the stakes do matter.
As the years go by, Paul Feig gets better and better as a director. Like his contemporary Judd Apatow, he is striving to create a comedy family. A large part of “The Heat” is about Mullins’ big, loud Boston family and family values overall. Like any good family, “The Heat” is warm and inviting even in the midst of its insanity. This is a great comedy because it is dark, but never quite filled with contempt.
Share on Tumblr