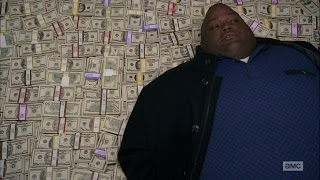 This is a recap of episode 9 of season 5 of “Breaking Bad.” The episode is “Buried.”

Well, there was no way to top last week’s episode.

Last week, the cat leaped out of the freaking bag, tore up the entire place, and pooped outside the litter box after Walt warned Hank to “tread lightly.” This week’s episode was also tense, but in a much quieter way. It was a linking and in-between episode, a nice valley between last week’s eventful episode and what is sure to be another great one next week.


“Buried” begins with a very sad Jesse Pinkman, having thrown all of his money on stranger’s front lawns like some rich paperboy, as he lies on one of those tilting and spinning things on a playground. At this point, he seems less sad then flat out dead inside. The overhead shot of Jesse spinning away is something to marvel at. It’s a great reminder that “Breaking Bad” is the most cinematic show on all of television.

The episode then picks up right where we left off last week: a stunned Walt stands outside of Hank’s garage. Hank, without saying a word, once again closes the garage door. Walt is more panicked and vulnerable than ever. His suspicions further when Skyler won’t pick up her phone and in the distance, Hank makes a call of his own. It’s enough to make Walt drive over to Saul’s, because calling him clearly isn’t an option anymore, as phone taps are a dangerous thing for a wanted man.

Shortly after, Hank meets Skyler in a diner where ever-so-sweet Hank offers his condolences and does everything he can to help Skyler. However, ever-so-blissfully-ignorant Hank doesn’t know the extent of Skyler’s involvement in Walt’s empire. The ever so-confident Walt and Skyler that emerged in the past seasons are starting to crumble, and their desperation is just starting to look like the scene in “Goodfellas” where Henry realizes that Karen flushed all of his coke down the toilet: they are helpless in a frightening, clueless way.

This was a particularly long scene for a TV show, and one that proves that “Breaking Bad” never adheres to an episode-by-episode structure. Anna Gunn also has a strong chance to show off her dramatic chops in a scene where she must act like she’s a victim even though deep down she knows that she’s screwed.

“Buried” also had some fine acting from Betsy Brandt, who rarely gets a moment in the sun as Marie. Her only major plot line on the show, in which she moonlit as a shoplifter, was one of the show’s few weak moments. This week, she was finally let in on the big secret by Hank. Hank probably shouldn’t have told. However, Hank’s confession led to the moment in which Marie slapped Skyler across the face. The moment felt weirdly cathartic, as if it were actually the result of five seasons worth of buildup. Marie’s true anger didn’t come from the fact that Skyler knew about Heisenberg, but that she’s been aware since long before the twins attempted to murder Hank. So that’s when the tearful Marie let her hand do the talking. And while many of you might find Marie annoying, she definitely isn’t wrong.

As all of Skyler’s secrets came out, Walt started hiding all of his. Saul gave him some very Saul Goodman advice (dismantle your phone) and then some (more on that in a bit). Then came the welcome return of Saul’s goons (including Bill Burr, who’s currently one of the funniest standup comedians in America), who entered the episode by using Walt’s giant piles of accumulated money as a bed.

Walt then took the money out to the middle of the desert and buried it in barrels, a great opportunity to stick the camera inside some barrels as well. Maybe it was my sister and I who are the only ones on the planet to think that the digging scene felt a little like “Encino Man,” but you judge for yourself: 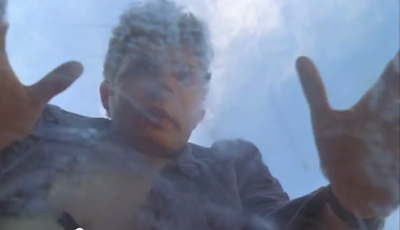 It was in this brief scene that Walt and Skyler shared together that I realized how much power Skyler holds over Walt, and I’m not sure if she is aware of that. She tucks Walt in, who looks a little like a grown child at that moment, and stands over him as the puppet master. She pulls the strings. She’s the one who can choose to say one word to Hank and bring the Heisenberg legacy down. Yet, Walt still has this bit of leverage over Skyler: family. Walt asks Skyler to give away every cent of his money to his children and his children’s children if he is to die. “You keep the money,” he tells her. He wants to make sure that everything he did actually has a purpose.
Now, that’s already a lot for an hour long TV show. But that’s not all. Lydia is still here apparently, because the writers still haven’t found a way to write her off the show. But she’s here and she’s mad that her new cooks can’t live up to the Heisenberg standards. Well, she’s not mad, her Czech employer is mad, because she has no feelings or personality of her own. That also might be why she doesn’t bat an eye when the new cooks are brutally murdered, though she refuses to look. This brings Todd back onto the show. Jesse Plemons’ innocent look and kind accent do such a great job at hiding the fact that Todd is a psychopath.
Back at Casa de Schrader, Hank must decide what he is going to do with the Heisenberg file. Marie encourages him to just turn him in already to save his own skin. Marie is a good woman who always looks after her husband. Yet, Hank presents a fine rebuttal: the moment he turns Walt in is the moment that his career in the DEA ends. It’s hard to work for the DEA when you’re brother is a dangerous meth cooker, I guess.
Regardless, Hank returns to work the next day to a surprise visitor. Jesse has been brought in for questioning after his money-throwing spree. He’s giving the officers nothing, so Hank figures that if he goes in the interrogation room, Jesse might finally open his mouth. So, Hank proceeds, and the episode ends in a bit of an abrupt cliffhanger which doesn’t provide a lot but promises much for next week. This is a different Jesse than the one that Hank punched in the face. I have a feeling that Hank will eventually get to him in an incredibly well written scene, and then Jesse will provide Hank’s missing link to Heisenberg.
Other “Breaking” Points
Thanks everyone for reading. I’ll be back again next week. And the next week. And many weeks over. I hope to hear some of your thoughts in the comments.
Share on Tumblr