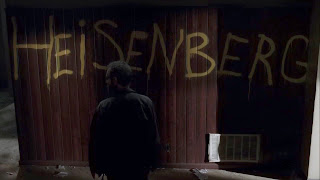 This is a recap of episode 9 of season 5 of “Breaking Bad.” The episode is “Blood Money.”

Last we saw “Breaking Bad,” Hank made the discovery we’ve been waiting five seasons to see. Last night, all of that came to light and it did not disappoint.

Vince Gilligan has such an amazing grip on how the camera works, he is like a master filmmaker who runs a TV show. He is so skilled at misdirection, that I thought the opening shot of a bunch of kids skateboarding in an empty pool was an episode of “Rocket Power.” Nice trying pranking America, Matt Stone and Trey Parker.

This was actually yet another flash forward in the “Breaking Bad” timeline. Walt, with a full beard and a full head of hair, returns to his dilapidated home to get the Ricin that he hid inside an outlet last season. Remember, on “Breaking Bad” every little moment means something and will likely be mentioned again. So you can bet that old lady who nearly spoiled Walt’s assassination attempt on Gus will be back.

I am really digging these flash forwards. They’re simultaneously fascinating and annoying. We see so much, yet get so few answers. Things are beginning to make a little more sense though. I have one possible idea that Walt’s not-so-pure meth that pissed Lydia off might invoke the wrath of some very angry customers.

Now that I got those predictions out of the way, let’s talk about how funny “Breaking Bad” can be. This was an episode chock full of with funny moments.  one of the funniest moments in the show’s history came as Walter simply uttered “Hello Carol.” This show has always been so good at peppering in tiny, subtle comedic moments in the tensest of scenes. After “Breaking Bad” goes off the air, Vince Gilligan should really give comedy writing a try.

“Blood Money” might be right smack dab in the middle of season five, but this episode still felt like something of a fresh start. Walt sheds his black Heisenberg outfit for something more plain and in the process starts to look a little like the old Walter White, sans mustache. Walt is running the car wash with Skyler now, and the most exciting thing about his day is that they might expand to another location. Walt may not show boredom, because he has no choice but to abandon the way of life that he loves so much, but he definitely feels it. Later, Badger describes a script for a “Star Trek” movie that he wants to write (someone please make this happen), in which the characters are stuck in a “neutral zone” and get bored. It doesn’t sound like the most exciting installment of “Star Trek” ever, but it definitely describes what Walt’s life is slowly becoming.

But enough theorizing about what Walt thinks about owning a car wash. There was an underlying tension between Walt and Hank throughout the episode, given that the episode begins with Hank discovering Walt’s big secret. The irony plays well for a while. Usually, Walt is the one hiding a secret from Hank and the rest of the family. Now, it is the other way around. For once, it was nice to see Walt being the one not in the know.

So after finding out the truth on the toilet, Hank went home early, as always blaming it on a bad stomach. After suffering a major panic attack, he puts the Heisenberg investigation back into gear. He sets up shop in his garage. This is a great opportunity to remind us all that Hank brews his own beer. Things go great until Walt stops by and asks some questions. This time, he doesn’t try and put a nice ribbon on anything he has to say, because the jig is up. The second Hank closes the garage door, my blood ran cold. It was such a brilliant way to raise the stakes of the scene with one slow little action. Once again, Hank displays his violent temper and punches Walt right in the face. Walt doesn’t fight back with violence, because no matter how much of a psychopath he is, he is almost always careful about when he uses force. Walt is an emotionless manipulator, while Hank can never keep his emotions out of his actions. Dean Norris is the MVP of this episode, going from a Kubrick stare to a cathartic anger in moment’s time.

The very last thing Walt says in this episode is “tread lightly,” a line that is likely to become yet another one of Walt’s classic, evil one-liners. Treading lightly and carefully is something the writers must have had to do as they created each remaining episode of the show. I thought that this moment would be held off for another few episodes. It was an incredibly risky move to put it in episode one, and a move that I believe paid off. I felt like I was holding my breath for a majority of the episode and once the credits rolled, I could exhale. I hate to have to wait another week for the next episode, but I think it’ll just make the tension even more exciting.