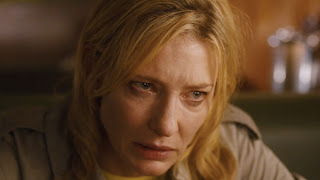 “Blue Jasmine” begins as Jasmine (Cate Blanchett) lays out the entire exposition of her life. It’s a little odd because she’s not talking to anyone. She’s not even talking to the camera. She’s just talking to herself, in hopes that some random passerby will accidentally be dragged into her delusional vanity.

Woody Allen has a drawer filled with hundreds of ideas in his room. I wouldn’t be surprised if he just handpicked one at random every year. However, this seemed like a nearly perfect time to release “Blue Jasmine.” It’s context is the Financial Crisis. It came out far enough away to not seem like a cheap, timely story but close enough to it where it is still relevant.

Despite this, “Blue Jasmine” is about people, not politics. After the imprisonment of her investment banker husband Hal (Alec Baldwin), a swindler akin to Bernie Madoff, Jasmine is thrown into the real world for the very first time. She trades a ritzy Manhattan apartment for a significantly smaller one in San Francisco with her sister Ginger (Sally Hawkins). And for the first time in her life, she finds herself looking for a job. While doing this, her anxieties and neuroses slowly begin to take hold of her.

As Jasmine, Cate Blanchett gives a wunderkind performance. It’s the kind of acting that breaks a lot of hearts and wins a lot of awards. Watching her here is like watching an emotionally unstable child: you never know when she’s going to snap. It is this part of her performance that ends up being so heartbreaking, because nobody knows less about what is going to happen to Jasmine than Jasmine herself. At a few points, she even partakes in the Kubrick Stare.

Blanchett is joined by an ensemble as good as any seen in a Woody Allen movie. As usual, Baldwin can be a menacing figure even when he’s being nice. As Ginger’s ex-husband Augie, Andrew Dice Clay provides some of the film’s most surprising moments of comic relief. No surprise, Louis C.K. is a standout here. Surprisingly, it’s for a much more serious role. As Ginger’s romantic fling, C.K. is sweet and vulnerable, displaying a very different persona than the one he presents to the world onstage.

“Blue Jasmine” is one of the darkest films Woody Allen has ever made, and he’s made ones where people are murdered right in front of our faces. In “Blue Jasmine,” some of the most horrifying things are simply implied. “Blue Jasmine” reminded me of a similarly titled film, “Blue Velvet,” which pulled back the curtains on suburbia and exposed the darkness beneath. Similarly, “Blue Jasmine” pulls back the overly expensive curtains on the upper class and exposes the pain, shallowness, and phoniness. According to “Blue Jasmine,” materialism can actually drive a person insane.

Woody Allen has been well known throughout his career for writing excellent female characters. I believe it is partly because he seems to know women so well. But also, he puts little pieces of himself into all of his characters. Jasmine’s fears might just be a more elevated version of anything Alvy Singer was thinking about in “Annie Hall.”

There is an inherent sadness to many of the female characters in “Blue Jasmine.” While they are strong characters, they are also victims of circumstance and deceitful men. It’s as if they are in a sleepwalking mode of helplessness. And once both Jasmine and Ginger awaken for the first time, they both get sucked back in. Dependence is a deadly trap but for them, dependence equals comfort without question.

Woody Allen likes to make films that tell two stories at once that both reflect on one another. Whether it is “Crimes and Misdemeanors ” which tells two separate stories, one as a comedy and one as a drama, or “Blue Jasmine,” which reflects on two different characters similar mistakes in the past and present. Sometimes, it is hard to tell which story is which, because they blend so well together.

Through this film, Allen beautifully expresses the struggle of comfort versus happiness, and whether or not they can go hand-in-hand, or if they are mortal enemies. As the film moves along, Jasmine’s mental illness overtakes her. But the crazier she becomes, the more she seems to be able to see the truth. It’s like in “Silver Linings Playbook,” that those who best understand the world are those who are maybe a little bit crazy. At one point in the film, Jasmine says she got her name from the eponymous flower, which only comes to life in darkness. Woody Allen would probably make fun of me and call me a “pseudo-intellectual” for looking to far into that statement, but Jasmine definitely becomes enlightened as her life spirals further out of control.