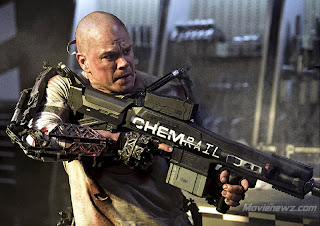 Futuristic sci-fi films wouldn’t be much fun if they imagined the best possible scenario for the future. “Elysium” might be one of the bleakest versions of Earth’s future shown on screen.

It’s approaching the end of the 21st century, and Earth has become extremely overpopulated. Mankind is plagued by disease and pollution. Los Angeles, where the film is primarily set, looks like a third world country. The sleek, electronic buildings that lit up futuristic Los Angeles of “Blade Runner” are nowhere to be found. The tallest buildings we see are nothing but carved out skyscrapers now filled with shantytown homes.

Not everyone is doomed, though. A select few get to go live in Elysium, which is a utopian space station suspended above Earth that looks like a giant recreation of Beverly Hills. Everyone on Earth watches Elysium in wonder while nobody in Elysium can bother to ever look down at the place they once called home.

Max (Matt Damon), who for some reason is the protagonist, dreamed about going up to Elysium ever since he was a little boy. Now, he’s a grown up and he’s still stuck on Earth. He’s one of the lucky few to have a job, which he trudges to everyday while getting pick pocketed by a swarm of people speaking assorted languages (mainly Spanish).

“Elysium” is no easy place to get to. The hardline Secretary of Defense (Jodie Foster) won’t let any illegal civilian step aboard the space station. She is so insistent on this that in a particularly disturbing scene, she releases a series of bombs on a group of ships filled with innocent people.

The space station is almost too good to be true. Not only does it look like the Hanging Gardens of Babylon, but it even has machines that can heal anything from broken bones to cancer. Max gets lucky and ends up in the middle of a freak nuclear accident that gives him only a few days to live, unless he goes to Elysium. Now, he has a real excuse to get up there.

“Elysium” is the second film from South African director Neil Blomkamp. Blomkamp wowed me in 2009 with his debut feature “District 9.” “Elysium” is not perfect, but it’s not fair to call it a sophomore slump. It is filled with great ideas that unfortunately aren’t fully elaborated on. The most disappointing part is to see this nearly fully realized world go to waste. The film is called “Elysium” and Max spends so much time wanting to get there, yet so little is seen of it. Also, the idea of a Los Angeles that looks more like Mumbai is fascinating to me and I would have loved more of it, or even a more expanded view of what the rest of the world looked like at that time. A futurist should be as particular about details as a historian is.

Perhaps some of the universe building troubles stem from the story. “Elysium” is bogged down by a heist plot that boils down to computer hacking on about the same level of silliness as “Independence Day.”* What made a dystopia film like “Children of Men” so great is that exploration of the world was part of the story. “Elysium” limits itself to cold, gray corridors and the insides of rocket ships.** Not to mention that for an action film, “Elysium” has very little action.

Everyone involved in “Elysium” is doing the best they can, especially the actors, who deal with some weak material. Max feels like a generic action hero when Damon is capable of so much more. Not to mention, his love of Frey (Alice Braga), which should be the heart of the film, ends up being quite hollow. Yet, Jodie Foster manages to do a lot with a little and ejects her villain with icy apathy towards the struggles of others by using so few words. The real show stealing performance though comes from Sharlto Copley as the wild card Kruger. This is a complete turnaround from his aloof hero in “District 9.” He crafts a villain who is sometimes funny but can also be frightening just by the way he looks at you. If anyone from this proved to be leading man material, its Copley.

Looking back, “Elysium” at least gives you enough to paint a decent idea of what humanity is like at the time. You just have to look very closely at the small snippets. The best example comes after Max is arrested by two robot cops and then goes to police headquarters, only to go and talk to a voice box. This felt farcical yet totally plausible. “Elysium” shows a future where people are fractured because of lack of communication, whether that’s because technology has replaced most jobs or rich white people have decided to create their own planet. Had “Elysium” explored this more it would have transcended originality and been flat out revelatory. Instead, like many other blockbusters that try really hard to be important, “Elysium” just ends up with a jumbled message.