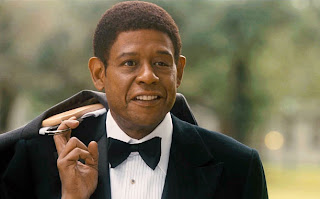 “Cotton was all I ever knew.”

Pop quiz hotshot: Is this quote from the opening of “The Butler,” or a proposed sequel to “The Jerk.” Surprisingly, the answer is the former.
“The Butler” is a big historical drama that is filled with some shining moments, and some others where Lee Daniel is practically screaming “Give me an Oscar!” at the screen.
“The Butler” is based on an incredible true story. It is one of those stories that chronicles history from a character who was always behind the scenes as opposed to the forefront. Those stories can often be the most truthful, as observers tend to be a little more objective than participants.
Forest Whitaker takes on the role of Cecil Gaines, a man who was born to poor cotton pickers in the deep south. His mother is repeatedly raped by one of the landowners and his father is arbitrarily murdered right in front of him. The old woman who runs the house (Vanessa Redgrave) shows enough mercy to take Cecil under her wing and teach him to be a servant for faux-fancy white people. The name for this is something I choose to not reprint here.

Cecil practices and becomes very good at his job. He learns everything there is to know about fine dining, from which fork is for salad to which one is for the meat, or however that works.* Cecil runs away from the plantation and ends up in one butler job after another until he finally hits the jackpot: White House butler.
Cecil remains the White House butler for nearly three decades. Once Cecil lands the job, “The Butler” becomes a montage of mid-20th century American history, with some insightful glances into the lives of the men who ran America. The balance between the screen time each president gets is sometimes bizarre. Cecil starts work during the Eisenhower administration. It’s unsettling for at least a few moments to see a surprisingly quiet Robin Williams play Eisenhower. James Marsden is a more fitting choice for JFK, yet we spend a very small amount of time with the much celebrated president. Perhaps Daniels and screenwriter Danny Strong figured audiences know enough about him by this point.
As a butler, Cecil is trained to be present yet invisible. Even though Cecil is the main character, he is also the audience surrogate. His duty as a butler is the same duty a viewer has when watching a film. Yet, as the years go by, Cecil becomes less invisible to those in power. He never gets to decide policy, but he is a really good listener.
“The Butler” is the least depressing of Lee Daniels’ films to watch. Sure, it has its disturbing moments, but it also has Lyndon Johnson (Liev Schreiber) yelling at people while sitting on the toilet and John Cusack playing Richard Nixon, prosthetic nose and all.

The presidential moments of “The Butler” are more entertaining than they are revealing. The strongest parts of the film take place in Cecil’s home. Cecil’s wife Gloria is portrayed by Oprah. This would be distracting if Oprah weren’t such a good actress. She is dynamic in every scene she is in, a good reminder of why she’s so successful. Thankfully, the home scenes aren’t all politics. A lot of them are just about everything from the culture of the time to the food that Gloria serves her family. You can find out things about presidents from the History Channel. Only in film can you get a real sense of how ordinary families of a certain time lived.
Cecil works hard and sacrifices so he can give his sons a better life. Cecil loves his country and turns a blind eye to the oppression, just because things have gotten a little better. His oldest son Earl (David Banner) won’t have any of it though. Earl gets arrested repeatedly for fighting for civil rights. The most fascinating scene in the film comes as a professor teaches a bunch of students how to participate in a sit-in. It basically involves being tormented without batting an eye. The scene is eye-opening and harrowing. It is a complete contrast to Cecil and Gloria, who just want to believe that what they’ve been given so far is enough for them.
Some of these more interesting undercurrents of African American identity are often tampered by Lee Daniels’ over-direction. The scene in which a Freedom Riders’ bus is destroyed by the KKK would be distressing enough as is. Yet, Daniels feels the need to put it in slow motion. Witnessing something as is can be powerful enough. When Daniels slows it down, it’s as if he’s blatantly manipulating the viewer’s emotions. Visual art is supposed to tell us how to feel but a little thing called subtlety is often forgotten.
“The Butler” then takes its biggest misstep towards the end. I am not going to label this as a SPOILER ALERT WATCH OUT because this is history and nobody ever got mad about hearing how the Vietnam War ended in class. At one point, “The Butler” finds a nearly perfect point to end at, and then decides to keep going to the present day. Seeing recent history portrayed in film and TV is always a little jarring, which is why I’m not the biggest fan of “The Newsroom.” When “The Butler,” enters the Obama era, it suddenly turns from lecture to PSA. I don’t mind movies about politics, but it gets a little weird when they become political.
People have been calling “The Butler” “black Forrest Gump.” This is a thought I also had when I left the theater so this confirms that maybe I’m not racist. Anyway, while that title might be a little facetious, it’s also fairly accurate: “The Butler” is a look at history through the eyes of the little guy. However, it also relies heavily on forced sentimentality, which overshadow some of the greater aspects of the film. “The Butler” is a good enough Oscar contender that serves as a good history lesson, but it just misses the mark of a much better film.
I don’t normally give out letter grades for movies, but “The Butler is the definition of a B.
*Dining etiquette is hilarious. I know I’m an adult but I still don’t know the difference between one fork and another. Oops.
Share on Tumblr