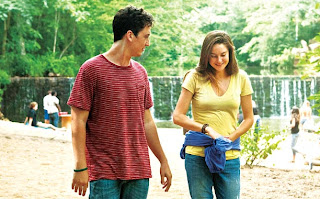 “The Spectacular Now” is based on a novel, as opposed to director James Ponsoldt’s childhood. However, the one thing that the film actually has in common with his life is that it takes place in Athens, Georgia where he grew up. There is a strong sense of familiarity with the whole thing, as if he is reminiscing on all the spots he once called home.

The teenage anti-hero of “The Spectacular Now” is Sutter, played Miles Teller, who sounds an awful lot like Jonah Hill and acts an awful lot like he doesn’t give a crap. Unlike most high school stories, the protagonist isn’t awkward. Despite all the cracks in his life, Sutter is frighteningly self-confident for somebody his age. He’s just come out of a pretty bad breakup with a girl (Brie Larson) who seemed like his soulmate. Now, he’s writing an angry college essay with her as the subject. “500 Days of Summer” says something about turning your former loves into literature, but it’s probably a bad idea to put them into a common app.

Sutter has this vision of living completely in a delusional happy moment. He drinks as much as he can as a way to keep reality at bay. His mother (Jennifer Jason Leigh) works nearly all the time. Meanwhile, his father (Kyle Chandler, completely shattering the Coach Taylor illusion) is completely absent from his life, so he collects a series of father figures such as his boss Dan (Bob Odenkirk), who’s the definition of Southern Hospitality.

His delusional life view is compromised when he meets Aimee (Shailene Woodley) one drunken night. Well, he doesn’t really meet her. He ends up passed out on her front lawn and being the good girl that she is, she gives him a hand. The two begin to rub off on one another (personality wise, you sicko) and eventually fall in love. But given the fact that Sutter is kind of a jerk, he’s not quite sure if he wants to call it love.

“The Spectacular Now” is a lot about breaking stereotypes, which is why everything about this story feels so real. Just like Sutter, Aimee is also not like the kind of teen you’d find in this movie. Her broken backstory is put front and center, yet because her spirits are always so high, she never enters Manic Pixie Dream Girl territory. While she does have a love of comic books that she shares, the real thing that Sutter and Aimee bond over is there families. The way these two people bond and fall in love so sincerely made me think a lot of “Harold and Maude,” except, you know, they’re both the same age.

Speaking of that perennial 70s comedy, “The Spectacular Now” feels like it could have come right out of that era. James Ponsoldt is a wonderful director because he tends to let the film speak for itself. The camera usually sits still, and if it isn’t sitting still, then it’s slowly zooming in. One great moment comes and Sutter and Aimee stand by a window overlooking the football field. This conversation feels so important because we get to hear all of it without a single cutaway. Here, we see how little Sutter knows about what he will do with his own future.

“The Spectacular Now” is the kind of warm, character driven story only expected to be seen on TV nowadays. People like James Ponsoldt and co-writers Scott Neustadter and Michael H. Weber (“500 Days of Summer”) give me faith in the continued strength of the self-contained story. It even ends at just right the moment. We, as the viewers have guided the characters to where they’re meant to be. And it was a pleasure to bring them there.