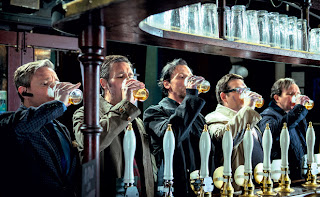 “The World’s End” marks the end of the Cornetto trilogy, a trilogy connected only by theme and named after ice cream. It’s as much about a trilogy of humans as it is about a trilogy of movies: Edgar Wright, Simon Pegg, and Nick Frost have created a pitch perfect cinematic universe where the code of law is alcoholism and arrested development.

Clearly, I will stay away from all possible spoilers, yet it is important to know that “The World’s End” comes full circle in the most, well, circular way possible: it starts and ends with people talking in a circle. In the beginning, it’s Gary King (Simon Pegg), a man who is a former shell of himself. Gary is a recovering alcoholic who can’t quite erase the memory of the best night of his life: The Golden Mile Pub Crawl.

The pub crawl covered all 12 pubs in his small English hometown of Newton Haven. Craving to relive the magic of that night from 20 years earlier, Gary reunites his whole gang. While they’ve all advanced forwards, he’s stayed exactly the same. Gary has some unfinished business in form of the World’s End, the last stop on the pub crawl and the one place they never got to.

The beginning of the film compromises of a bunch of montages of misery as Gary attempts to reunite the team. All of his friends have now split off and got respectable office jobs, wives, and children. Gary thinks that because he has no responsibilities, he has absolute freedom. What he doesn’t realize though is that having nothing doesn’t always help you get to a better place.

I wish I brought a timer into “The World’s End,” because the buildup is so impressive. It goes an extensive stretch of time as a buddy comedy about a bunch of friends getting drunk and reminiscing. That would be a fine movie by itself, but what makes it even better is the fact that Edgar Wright then takes it to the complete next level. The buildup is what makes the stakes so much higher once the robots invade and bleed blue paint everywhere. Yes, you read that right.

It takes a really long time for “The World’s End” to get to the robots, but that makes the first attack even more surprising and worth the wait. Up until that time, Wright and the guys show their brilliant knack for recurring jokes. The beautiful thing about “The World’s End” is that I already feel like I need to watch it again because of how much I must have missed the first time around. In one subtle sight gag, Gary drives his old, beat up, gas guzzling car past a billboard for an electric car. Few directors are as good at understanding visual humor as Edgar Wright.

“The World’s End” is yet another of Wright’s satires of small town life. In making fun of suburbia, “The World’s End” eventually brings life to the mundane. It is in the little everyday things that Wright seems most interested in, which is why watching a beer get poured in one Wright’s movies can be as cool as watching a robot get his head kicked off. And yes, the fight scenes are better than any Hollywood movie I’ve seen this summer.

“The World’s End” also shows Wright’s proficiency in the language of cinema. “The World’s End” is a perfect sci-fi homage. It borrows from everything from “Blade Runner” to “Minority Report” to movies I haven’t even seen. However, Wright is no thief. He takes things from different genres, blends them together, and then adds his own thoughts to it. What brings it to the next level is that it is also a perfect look at the nostalgia that runs popular culture. Just like the zombies in “Shaun of the Dead,” the robots of “The World’s End” aren’t too different from the humans. Like Gary (who could be a stand-in for a lot of the people who attend Comic Con), the robots are programmed with selective memory.

Of the three characters that Pegg has played in the Cornetto trilogy, Gary is by far the most pathetic, but ultimately the most entertaining to watch. If the Oscars took movies like “The World’s End” seriously, Pegg would be a frontrunner for Best Actor. His self-denial is as sad as his snark is hilarious. Luckily, Pegg is backed up by a great supporting cast, especially Nick Frost, who is one of the most talented comedic actors working today. He spends most of “The World’s End” as a subdued recovering alcoholic. Once that does change (that’s not a spoiler because come), Frost becomes a master of casual slapstick. Oh also this cast includes the guy who plays Bilbo Baggins (Martin Freeman) as well as Pierce Brosnan, who sports a Trotsky/Evil Abed goatee.

Perhaps if “The World’s End” does well, people will start taking comedy a lot more seriously. Maybe a line like “he’s my cock!” doesn’t belong in a movie like this, but it is a line of dialogue that this story needs. It is the humor that gives “The World’s End” life and ultimately what makes its satire even sharper. Here lies the best damn movie so far this year. While “The World’s End” heavily debates the idea of slavery and whether freedom can be obtained by being a slave to something. Maybe I am missing the point by saying this, but Edgar Wright, Simon Pegg, and Nick Frost have my undivided attention and servitude for the rest of their careers.