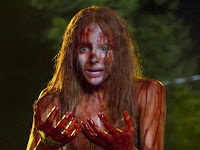 Poor Carrie White. 37 years later, and she still can’t catch a break. The latest update of “Carrie” is not a total facelift, but it does take the White family and places them in the present day. If you’ve already seen the original, you might be interested to see how much more the White family feels out of place in 2013 than 1976.

Even for newbies, I believe the story of “Carrie” is well known enough at this point that I shouldn’t use too much time to lay it all out. Carrie (Chloe Moretz) is still a misfit, and her mother Margaret (Julianne Moore) is still a religious fanatic. Carrie still gets bullied, gets covered in pig guts, and then gets sweet, sweet revenge.

Unlike the original though, director Kimberly Peirce decided to focus much more on the bullying aspect. This is important, as the Internet has made bullying both much more prevalent and scarier than it ever was in the past. On the one hand, Peirce handles this topic with restraint, rightfully not cluttering the screen with texts and Tweets. This is what sets “Carrie” apart from most modern teen films, even if it is sometimes feels like a gorier version of a CW show. On the other hand, Peirce doesn’t explore the bullying idea enough, and it often feels more like an afterthought than an insight. Also, even somebody as maniacal and dumb as Chris (Portia Doubleday) wouldn’t post a video that incriminating on YouTube for anyone and everyone to see.

I’ve begun to shake off my completely negative attitude towards remakes. The best thing about them is that they can shed light onto the filmmaking of both the past and present. The “Carrie” of 1976 creates tension with a slow buildup. It is more a work of the Hitchcockian school of terror (indeed Brian De Palma was a big fan of paying homage to Hitchcock). The “Carrie” of 2013 throws the ideas of patience and subtlety out the door. The action scenes in the new “Carrie” are well choreographed and plausible, but they are never surprising and they never keep you guessing. At one point after a big explosion I said to myself, “oh they had to do that just in case we weren’t sure that character was already dead. Now they’re just more dead.” The more “Carrie” shows, the less scary it becomes.

While a movie about telekinesis obviously isn’t going to offer the most realistic portrait of high school, there could have at least been a little more effort. I would have liked to see Carrie in the same high school I saw in “The Spectacular Now,” where the teens at least speak the way teens actually do. “Carrie” feels less like a horror movie set in high school, and more like a superhero movie. In fact, at several points I felt reminded of “The Amazing Spider-Man.” While I really enjoyed that movie, Carrie shouldn’t be a superhero movie. It is more interesting, and more tragic, to watch her struggle with her powers. Carrie is a tragic anti-hero, not Wonder Woman.

There’s also a lot of problems with the dialogue, which rarely replicates the way teenagers actually talk. However, the actors make the best of the script they are given. Chloe Moretz, the most mature actress her age in Hollywood, embodies all of Carrie’s silent rage. Meanwhile, Julianne Moore is sometimes unrecognizable in her performance as Carrie’s mother. They both portray madness in two different ways: one implicitly, and one explicitly.

As director, Peirce definitely respects the source material, and does her best to remain faithful while inserting her original voice. It just doesn’t seem right to turn “Carrie” into such an on-the-nose anti-bullying film, when the original story did that so well without having to state the message. The latest version of “Carrie” is a fine introduction to the story, but its existence still doesn’t seem merited enough for me. Throughout its entire run, it had my attention. However, it never had my full curiosity.