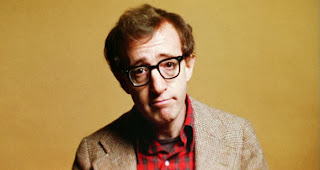 Jews make up about 0.2% of the world’s population yet they have always been a loud (emphasis on the loud) and prominent voice in film, television, music, and comedy. The next eight days are Hanukkah, which is not the most important Jewish holiday, but we do get presents. For each night of Hanukkah, I will share one Jewish entertainer who has had a big impact on me. For the second night of Hanukkah, let’s talk about Woody Allen:


And the second face on the Mount Rushmore of Jewish comedians: Woody Allen.

At first glance, Woody Allen looks like the stereotype of the typical Jewish man: nebbish, scrawny, neurotic, and intellectual. On his own account, Allen is far from this in real life. He is an actor playing a part that he happens to be really good at playing.

Allen has a different kind of Jewish humor than Mel Brooks, who I profiled yesterday. Instead of telling funny stories from the Lower East Side, Allen is more the kind of Jew who tells jokes that began with the setup, “so three Rabbis walk into a bar…”

Like many other Jewish entertainers before him, Allen anglicized his name (he was born Allen Konigsberg). However, that did not stop Jewish ideas from influencing his writing. Just look at “Annie Hall,” where the funniest scene is about the differences between a Jewish and a non-Jewish family. “Crimes and Misdemeanors” is about a man dealing with faith-induced guilt after committing a crime. You can change your last name all you want, but that won’t stop you from being influenced by your upbringing.

Whether or not his presence fulfills stereotypes is moot, because Allen is one of the hardest working people in all of show business. Without a laptop or a cell phone, he has been putting out one movie a year for most of his career. Sure, some of those turn out to be flops (as might happen when your creative output is that high), but its always worth it to get classics like “The Purple Rose of Cairo,” “Hannah and Her Sisters,” and “Midnight in Paris.”

Just like Mel Brooks, Allen has not rendered himself irrelevant, despite duds like “To Rome with Love”. Two years ago, he won an Oscar. This year, he wrote and directed “Blue Jasmine,” which is by far one of his finest features. Allen has gone from standup to TV to film and dominated each medium. He has recently talked about a possible return to standup comedy. I don’t know if this was just talk, but if Mr. Allen decides to return to standup it would make the Jewish community, and the entire world, very happy.

Fun Fact: My first exposure to Woody Allen was through the movie “Antz” where he voiced the lead ant. Seriously, it’s an animation classic.

Come back to The Reel Deal tomorrow night for Jew #3.
Share on Tumblr