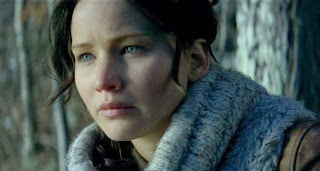 Here’s the thing about sequels: they are usually at their best when they are planned and more importantly, when they come at the center of a trilogy.

A few months have passed since they won the first Hunger Games and Katniss (Jennifer Lawrence) and Peeta (Josh Hutcherson) find that their lives have completely changed. In addition to celebrity status, they have more money than they can spend. Katniss and Peeta can barely spend anytime in their home of District 12, which looks something like coal mining country in Western Pennsylvania, as they have to go on their victory tour. During this time, the two of them are basically trained to be celebrities and participate in what is essentially an extended press junket campaign. One way that “Catching Fire,” and “The Hunger Games” series in general, justifies its translation into film is that it sometimes seems like a commentary on entertainment and being a celebrity in general. This is where the “Hunger Games” series separates itself from most of its Young Adult counterparts: it doesn’t pander to its young generation as much as it is inspired by it. Apparently, we are a bunch of brats who love reality TV so much that it can distract us from any of our problems. The Real Housewives are the new opiate of the masses.

“Catching Fire” is about what happens when the opiate starts to fade. Escapism isn’t working in this world anymore, as the divide between the rich and poor is now so big that it is hard to avoid. Rebellion is now impossible to avoid. Katniss has become the face of the uprising. The president (Donald Sutherland) hoped that Katniss would inspire hope in the people of her district; just not in this way.

Now that most of the exposition of the first film is out of the way, “Catching Fire” can move on to more detailed world-building, which it does quite exceptionally. By focusing on class issues, and more importantly the people of each district, “Catching Fire” elevates this futuristic America from bland dystopia to complex society. While the poor suffer, the rich eat until they are full, make themselves throw up, and then do it all over again. The rich people of “Catching Fire” act like a bulimic version of the French nobility.

While “Catching Fire” adds a few new characters to the mix, such as the predictably great Philip Seymour Hoffman (who will hopefully get more screen time in “Mockingjay”), it most notably strengthens its existing characters. Lawrence continues to prove that she can turn anything into an Oscar winning performance. Katniss had to deal with a lot in this installment, including, PTSD, heartbreak, and a love triangle which finally stopped being all “Twilight.” Most things in life are better when they don’t try to be like “Twilight.” Luckily, Lawrence and Hutcherson display much better chemistry in this film than in the last one.

There is also some new blood added to “Catching Fire” behind the camera. Director Francis Lawrence adds a grittier look to the film and smartly does away with most of the shaky cam. Writers Simon Beaufoy (“Slumdog Millionaire”) and Michael Arndt (you might have heard of him as the man who got kicked off of writing the new “Star Wars”) structure the story in such a way that plays off the first film while also being something completely different. Without spoiling too much, the main characters end up in the Hunger Games once again. In movie terms, the way in which they end up in the competition again is surprisingly plausible, so long as you remember that mutant baboons don’t actually exist.

I’d like to focus on the writers once again because usually in a film of this scope, the writers supposedly don’t matter. However, they mean quite a lot when you are adapting a book to the big screen. I have not read any of the original novels, so I cannot speak as to whether or not they got the voice of the original down. However, what I can say is that besides capturing the dark side of this story, “Catching Fire” is funnier than you could ever imagine. It really digs down and finds the humor in most of its characters, and that writing is supported by some great work from the likes of Stanley Tucci and Woody Harrelson.

“Catching Fire” is a strange crossroads in the series, as it is the penultimate story, despite the fact that there are two more films on the way (of course “Mockingjay” is being split into two parts because money). While it is an incredibly solid film on its own, “Catching Fire” ends on a note that suggests that it never wanted to tell a self-contained story, as if it just needed to serve as filler between the original Hunger Games, and what I predict will be an all out war. However, “Catching Fire” deserves to be known as much more than just that. Here’s a movie where you will gasp at a dress that turns on fire, weep over soldiers that abuse people, and then laugh at Woody Harrelson as he attempts to drink rubbing alcohol. There is no new James Bond film this year, so in terms of big Hollywood entertainment, “Catching Fire” will have to do. 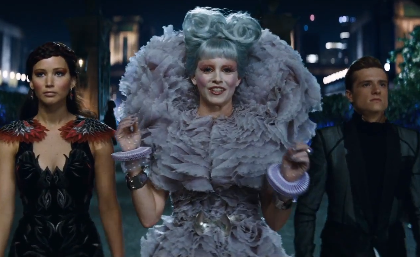