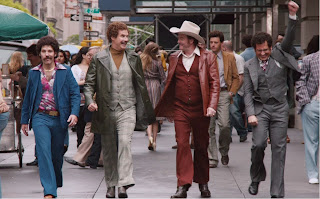 I was going into the seventh grade when “Anchorman” came out. I was just the right age to be completely inspired and blown away by a fairly raunchy PG-13 comedy. Watching the original “Anchorman” was basically a right of passage for anybody around my age. If you can’t quote it by heart, then there might be something wrong with you.

So of course something this iconic called for a sequel.

Don’t get me wrong, I laughed at “Anchorman 2″ a lot. It ups the ante on just about everything it can that worked in the original. Ron has many more expressions to capture his anger beyond “great odin’s raven!” In fact, by biggest regret was not writing them all down.

“Anchorman 2″ takes place in the 1980s and weirdly the characters haven’t changed at all since the 1970s, except that they like disco and are much more casually racist than they ever were in the past. I don’t know if their lack of change is bad writing or intentional, but I would like to think that it is the latter. The gang all moves to New York to take place in an experiment called 24 hour news. Nobody thinks it will work. It actually does, when you don’t actually report the news at all. “Anchorman 2″ weirdly becomes a piece of social commentary.

The first “Anchorman” ran smoothly at a brisk 94 minutes. Meanwhile, “Anchorman 2″ runs close to two hours and proves that editing is secretly the tool that can make or break a comedy. At times, “Anchorman 2″ felt more like a blooper reel than an actual film. I guess you could say almost the same thing for Adam McKay’s last film “Step Brothers.”* However, “Step Brothers” knew when to end a scene. While blooper reels are fun, even a great extra take can drag a film down.

Weirdly enough though, the best scenes in the film are the ones where Will Ferrell is allowed to be Will Ferrell. Say what you will about how good some of his films have been lately, but the guy oozes funny. That doesn’t just disappear. To me, he is as funny as he was all those years ago in “Old School” and “Elf.” Like any good comedian, Ferrell is fearless. He is never afraid to make himself look terrible, or make himself say and do things that are borderline racist. It’s okay though, the joke is on Ron Burgundy.

“Anchorman 2″ is at its best when it revels in absurdity the same way its predecessor did. There is an entire subplot where Ron and his son take care of a baby shark. It is one of the weirdest things I have seen in a film all year. It makes no sense and yet I bought every second of it. Ditto for the fight scene, which is even more ridiculous than it was before. This time, Ron and his news team face off against one of the most successful rappers in the world, a legendary movie star, and an Academy Award winning actress, among many others. It seems like everyone wants to jump on the “Anchorman” train.

Where the film doesn’t work is when it takes a bunch of jokes that worked really well the first time around, and runs them into the ground. I love Steve Carell, and there were some classic Brick moments here, but he seemed less and less committed the more screen time he is given. Some side characters are side characters for a reason: they are good to pop in with a funny line to save a scene here and there, and that’s it.

Other times, “Anchorman 2″ veers away from utter weirdness and goes into obvious joke territory. Seriously, there is a good 20 minute chunk of jokes about being blind and not being able to tell different objects apart. Come on, Adam McKay and Will Ferrell are so much better than that.

Ultimately, it is really the running time that brings “Anchorman 2″ down. As I said, I laughed a lot. But the laughs were spread out whereas in the first “Anchorman,” they crammed in as many jokes as possible, and nearly all of them landed. Instead, there are long stretches of “Anchorman 2″ that are kind of dull. Jokes land here and there. At this rate: the “Anchorman” franchise is going the way of “Austin Powers”: still funny as it moves along, but with diminishing returns.

*I mean absolutely no disrespect to “Step Brothers.” That movie is a freaking comedy miracle.