Yes, “Her” is about a man who falls in love with his computer. But eventually, the fact that the love interest in question is a computer will not faze you at all. That is the magic of “Her.”

“Her” is a little bit of everything. For anyone looking for a good laugh, a tear-jerking romance, and a science fiction fable all in one, “Her” is the perfect solution. The film takes place during an unspecified date in the future, though time doesn’t exactly matter. This is, however, one of the more accurate imaginings of the future on film. There are no flying cars or hoverboards here. “Her” is on par with “Children of Men,” minus all of the random acts of violence.
Maybe there isn’t much violence because, in this vision of the future, nobody is that aggressive towards each other. In fact, most people do not express many emotions at all, as most of them are plugged in at all times through an earpiece that is much less dorky looking than a Bluetooth. Nobody stares down at tiny phone screens anymore. Instead, they inject the almighty Interwebs right into their brains. People still enjoy life and love each other, but everyone seems a little more anti-social. The film is set in Los Angeles, which has since become a metropolis that resembles Hong Kong and Shanghai more than modern L.A. Theodore (Joaquin Phoenix) is just another product of this society. He is a writer who writes love letters for other people writing for their loved ones. He just always has the right words to put on paper. Some people say that the key to being a good writer is to be able to write in other people’s voices, and Theodore can write a love note from just about anyone’s perspective. Yet, this seeming romantic can’t get his own love life together, as he is torn apart by the heartbreak of his recent divorce. With a mustache and a smile just that is just slightly off-putting, Phoenix plays creepy in the most lovable way possible. At one point, a girl (Olivia Wilde) whom he goes on a date with describes him as a “puppy.” He is more like a puppy that won’t stop humping your leg.
In his loneliness, Theodore decides to buy himself a new OS (Operating System) that is smarter than your typical Siri. This OS is a new brand of artificial intelligence that evolves and changes just like any human. You can have a conversation with it beyond simple commands. Theodore’s OS names herself Samantha (Scarlett Johansson). Samantha is a little bit nosy, but that is only because she is curious about the world. She is also funny, intelligent, and a great listener. She is the perfect antidote to Theodore’s toxic love life. The two slowly fall in love, even if Theodore “doesn’t want anything too serious.”
If one were to just read the basic synopsis of “Her,” they might think it is the weirdest film imaginable. Anyone who still thinks that doesn’t deserve what the film has to offer. “Her” is so powerful partly because of how non-judgmental it is towards it characters. For instance, when Theodore tells his neighbor Amy (Amy Adams) that he has fallen in love with his OS, she tells him that she also has a close friendship with her OS. “Her” is a film where humanity and technology go hand-in-hand, because there isn’t that much of a difference between humans and machines anymore.
Most of the film’s kind nature lies in Theodore and Samantha’s relationship. While Samantha is never shown in human form, she feels real, even if it is only her voice that is present. In fact, Theodore and Samantha’s relationship is the most functional love presented in the entire film. That Samantha is not actually human ends up feeling inconsequential. It is what these two teach each other, and how they impact each other’s lives, that is the most important part here. 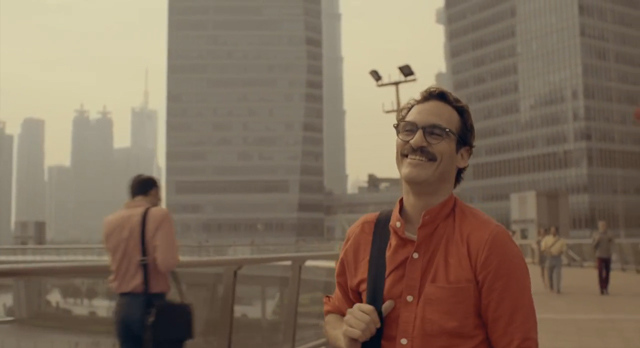 It is not just Theodore and Samantha who are impacted here. At one point, a side character comes in between their relationship because she just wants to be a part of the special bond that the two of them share. That is exactly how I felt. When the two of them are together, I get the sense that they have a shared worldview that few others possess. “Her” allows you to fully explore a relationship during both its best and worst hours. Writer and director Spike Jonze graciously allows us to be a part of those intimate moments that we necessarily shouldn’t be allowed to be a part of.
This is all thanks to Spike Jonze, who proves that he can direct something great even when it isn’t based off of one of Charlie Kaufman’s crazy ideas. “Her” is more sincere than meta, but it is also filled with some crazy yet brilliant ideas. Jonze has a real talent for tragicomedy. “Her” would have been pretentious and heavy-handed under anybody else’s care. However, Jonze knows how to balance sincere and silly. At one moment, the characters are having a discussion about metaphysics, and the next they are trying to figure out what it would be like to have butt sex with your elbow (long story). Both of these moments are actually thoughtful for varying reasons.
It might be a miracle that “Her” turns out to be as good as it is, given the very thin tight rope that it walks on. It attempts to be more a reflection on our times than an indictment of them, and in that it says more about the nature of humanity and artificial intelligence than most films that explore the same subject. Bad versions of “Her” have been made before. Luckily, we do not have to watch another “Bicentennial Man” or “A.I.”  Instead, we get to witness “Harold and Maude” set in the future.
Brain Farts From The Edge
Share on Tumblr