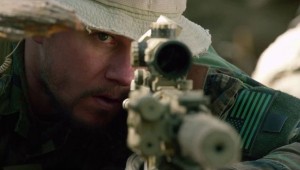 “Lone Survivor” begins with an abbreviated version of the first half of “Full Metal Jacket.” It’s a tense bit of documentary footage on the kind of military training we never see. It’s a lot more than running through fields of tires and climbing over walls. It seems more like hazing with a purpose that would seem pointless yet nearly everything from that training sequence ends up in the film again in one way or another.

The film is based on true events. It is set in Afghanistan in the year 2005. You will know it is 2005 because the character talk about “Anchorman” and the Rick James sketch from “Chappelle’s Show” a lot. I could not think of a better way to define the people from the year 2005. “Lone Survivor” is based on the true story of Operation Red Wings, a mission to capture a Taliban leader in the mountains of Afghanistan. While on the mission, the soldiers encounter a group of shepherds and a young boy, decide to let them go, and before they know it, they are surrounded by hundreds of Taliban soldiers.

This is not a particularly huge mission. It is nothing of “Zero Dark Thirty” proportions. This is what helps the film to focus more on its characters, as their survival, more so than the capture, becomes integral to the plot. It shows that even during the thick of war, it is still possible to worry about what you are going to get your fiancé for her wedding, which is what Ron Burgundy loving Michael Murphy (Taylor Kitsch) can’t get off of his mind. The other soldiers include Danny Dietz (Emile Hirsch), and Matt Axelson (Ben Foster, who often has the speaking mannerisms of a functional drunk).

And of course there is Mark Wahlberg, who plays Marcus Luttrell, the soldier who eventually wrote the book on which the film is based. Wahlberg deserves his own separate paragraph because “Lone Survivor” reminded me why he is a movie star. Wahlberg is to Boston what Matthew McConaughey is to Texas: they won’t get rid of those accents, no matter where there characters are from, and somehow they can get away with it. At his best, Wahlberg exudes a confidence that says that no matter what happens to him, he knows how to get out alive. He is the perfect movie star for this role: filled with equal parts toughness and vulnerability.

In general, “Lone Survivor” is equal parts action film and pathos. Even if you already know the ending, this feels like a story of survival that is something of a miracle. It doesn’t hold back any of the gruesome details; the tragic events that occur never feel sugarcoated. War is definetly hell, even if the scenery is really pretty.

“Lone Survivor” is unique from most other war films. It is as much about man against nature as it is about man against a foreign enemy. During one scene, the men have no choice but to tumble down an entire mountain in order to escape, and they can’t do this without hitting every single rock and tree along the way. The stunt would seem impossible if it were not true. As seen by “Lone Survivor,” sometimes you have to rough yourself up in order to survive. It’s the kind of film that will make you feel bad for complaining about having to get up to reach the remote.

This overdrive of testosterone comes from Peter Berg, who makes a comeback after “Battleship,” which wasn’t necessarily the highlight of his career. “Lone Survivor” emulates “Friday Night Lights,” the great drama series that Berg helped to create. “Lone Survivor” also takes on a very specific honor code and explores what it means to be a man. According to Berg, being a man is about making tough snap judgments. Nobody said that life would be easy. Berg is also an incredibly skilled action director who subtlety makes you care more by making the characters compelling. Like last year’s similar “Captain Phillips,” “Lone Survivor” doesn’t let you go until the very last minute, even if you know what is going to happen.

In the years to come, as our knowledge of Afghanistan increases, there may be better films about the subject. Yet, “Lone Survivor” will still work long after this year, because its themes are ultimately universal, and the fact that it is not politically charged definitely works to its advantage. “Lone Survivor” stands out well in a typically terrible time of year for movies. Don’t take “Lone Survivor” for granted, unless you were really looking forward to “I, Frankenstein” and “Ride Along.”