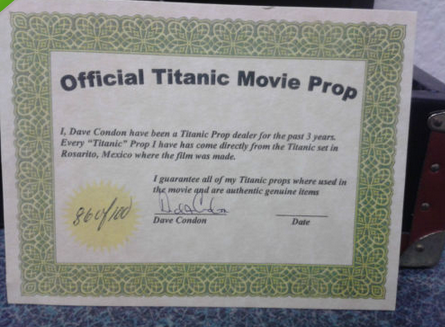 Today is a day that will live in infamy. It is the day that the Velociraptor Cage from “Jurassic Park,” which influenced this post, was no longer listed on eBay. It’s whereabouts, and the final price it was sold for, will remain shrouded in history.

But you know what they say: if you love something set it free. So from that we move on to this week’s selection of memorabilia. Folks, this week did not disappoint. In fact, I found so many that I will have to save them for another post.

I learned a lot from this week’s selection. Mainly that there are a lot of “Titanic” props on eBay. Enough so that being a “Titanic Prop Dealer” (as seen in the certificate above) is an actual job title that someone can have. Given what an epic film that is, I believe there will be no shortage of props until the day somebody finally begins selling off chunks of the actual boat. Seriously, the “Titanic” prop business is just about big enough that it could be listed on the NASDAQ. Also, let me just note that I have absolutely no idea what can get you listed on the NASDAQ; I just heard Walter White say this on “Breaking Bad” once and it sounded cool.

Anyway, come and join me for yet another exciting trip down the eBay rabbit hole:

Yes, I checked, and no, it does not come with a life-size naked Mike Myers replica.

Apparently, the acceptable amount of time to wait to profit off the death of another human being is one week.

No thank you. I’ll just watch this on loop.

Jingle All the Way

This is consumerism at its finest: a fake toy in a movie launches comic books and costumes. And then you can buy all of that stuff in real life. What I am really trying to say is I love that scene where Arnold says “nice doggie” to a reindeer before he punches it in the face.

This would make a great addition to your collection of plague toys that you bring out during that part of the Passover Seder. And yes, I am aware that only about three people understand what I am talking about.

I have no intention on giving my opinion about the Woody Allen molestation scandal. I wish they would just resolve the rest of it privately, because a lot of innocent people have gotten hurt from it. Anyway, I am just glad that they didn’t sell this as “a special item that was touched by an accused child molester!”

This is really cool and all. It comes from a classic and it replicates a piece of technology that doesn’t really exist anymore. But if you want me to buy your product, you might want to spell the name of the film correctly. Unless of course, there is a low budget Norwegian knockoff called “Terminater.” And if such a film exists, I should probably drop everything and watch it right now.

“Happy Valentine’s Day! I took out a second mortgage to pay for your gift!”

Question: Does it or does it not come with the alien with three boobs? This is an important question.

The Wolf of Wall Street