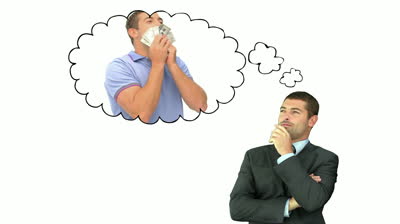 Of all of the stock photos involving money that I found, this one is by far the best.

In maybe the funniest scam of the century, you can use your real money to buy fake money on the Internet. Of course, the only stipulation is that said fake money must have been used in a movie. You can buy that fake money, put it under your mattress for a few years, wait for that movie to suddenly become a classic, and then sell it for even more money. Hey, it sounds more legitimate than those cash for gold commercials. Sorry, I just don’t trust any old dude in a cowboy hat who tries to sell me things.

During my search on eBay this week, I found many different currencies from many different countries, some real and some made up. There’s all of that as well as your weekly dose of weirdness, inaccuracies, and general confusion. Plus, you will also find what doesn’t technically count as a movie prop, but is still one of the coolest things I have ever found on eBay.

In “3000 Miles to Graceland,” Kurt Russell, Kevin Costner, and Christian Slater dress up as Elvis impersonators and try to rob a casino. Really? This is the best you could do in terms of props? Come on, Vegas is a city that is basically made up of tacky looking movie sets.

If Eddie Murphy had continued to do movies like “Coming to America” for the rest of his career, then there is a chance that his face could have ended up on real money.

You know that thing I said about how some of this fake currency could become more valuable if you wait for the film to become a classic? Yeah, that probably doesn’t apply to “Elysium.” I would rather use that $3.95 for a journey to find out the identity of whoever told Jodie Foster that her accent in this film was acceptable.

While this technically is not a prop, it is definitely one of the coolest items I have ever seen on eBay. I really hope there are handwritten notes in the script about whether or not Joe Pesci was dropping enough f-bombs in a given scene. I think I would like this script. One writer goes one way, the other writer goes the other way, and this guy’s sayin’ “whataya want from me?”

There’s nothing wrong with selling the cards from “Inglourious Basterds.” It’s a fairly legendary scene to those who care. However, the seller decided that they had to put Brad Pitt’s name in the title, despite the fact that Brad Pitt is not in this scene at all. It’s similar to the very first trailers for “Basterds” which sold it as a Brad Pitt film despite the fact that he’s barely in it. Moral of the story: Brad Pitt sells stuff.

This looks less like a shark tooth and more like something a third grader made in art class. Then again, people who watch “Jaws: The Revenge” probably aren’t looking for stark realism.

Good, I was looking for another chance to rant about the “RoboCop” remake. This prop precisely defines everything that was wrong with that movie: in a future where half-cyborgs can look through old videos and Google stuff by putting on a helmet, people still use gigantic cameras. This movie had absolutely no idea what year it was supposed to take place in.

The Flintstones in Viva Rock Vegas

It would be really funny if this slot machine contained all of the money that was wasted making “Viva Rock Vegas.”  In terms of Vegas props, it is a bit better than a fake $100 bill.

I am not sure what film this comes from. However, I one day hope we live in a world where Teddy Roosevelt gets to be on some form of money. Seriously, that dude was amazing. He got shot while giving a speech and then he kept delivering that speech even though he, you know, had a bullet inside him. It makes me feel bad for that time I cancelled my plans because my toe hurt.