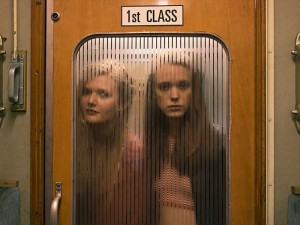 With fancy chapter title cards and graphics crawling all over the screen, Nymphomaniac looks like what would happen if Wes Anderson directed a deranged sex drama. The film begins in a haunting corridor of brick walls where Joe (Charlotte Gainsbourg), a middle aged woman, is found beaten up and bloody. She is discovered by Seligman (Stellan Skarsgard), a kind old man who seems lonely enough to take any company he can find. This works out well, as Joe does not want to go to the hospital. She would rather lay down with a cup of tea and have a nice conversation.

So Joe tells Seligman the story of her entire sex life, with Vol. I covering her youth. She begins by asking the film’s central question: is Joe a bad person? Don’t worry, she asks it in first person. She’s not that crazy.

During her early years, Joe treats sex as a competition and not a desire. She describes herself as “an addict out of lust,” but it feels more ambiguous than that. Nymphomaniac can sometimes come off as a term paper on the nature of sex, so it is a relief to see how funny Vol. I is. Sometimes, I am not sure if I laughed only because I was uncomfortable or because there are many genuinely hilarious moments. I mean, there is a hip thrust count and a part where her and her friend put on “f**k me clothes” and try to have sex with as many guys as possible. The winners gets a bag of chocolates. Lars von Trier seems to get the inherent absurdity of that whole situation.

Vol. I sets up the dynamic between Joe and Seligman very well, and leaves enough room for it to expand and grow in Vol. II. Joe is filled with experience and Seligman has read a lot of books. The battle of wits is one of street smarts vs. book smarts. The film takes a very dark turn when it touches on Joe’s relationship with her father (Christian Slater), which somewhat borders on perverse. Yet, this film does not want to be judgmental. Nymphomaniac: Vol. I is about setting up an objective environment, where nobody is harshly judged for the things they do. This is absolutely necessary, because a lot of really bad things are about to happen in Vol. II.

Nymphomaniac: Vol. II loses some of the humor and style of Vol. I in exchange for something that is more dark and brutal. There is a school of thought involving the idea that what we see is much more frightening and disturbing than what we do not see. Lars von Trier is so exciting partly because he completely ignores that idea and with that, his work gains an edge of risqué and unpredictability. However, Vol. II does have the funniest scene in a movie. It involves a three way. I will let you see it for yourself, because it is both hilarious and delightfully wrong.

Years after the events of the first film took place, Joe finds that her lifestyle is catching up to her. She was never really looking to feel pleasure, but the real problem is that she can no longer feel anything at all when she has sex. So she turns to S&M and bondage. This comprises of some of the film’s most unwatchable scenes. I mean, Willem Dafoe is in Vol. II, so you know it is going to be creepy.

Vol. II contains most of the film’s best stand-alone scenes, including her encounter with a pedophile. But in general, Vol. II is not much different from Vol. I. The only major difference are some big shifts in tone, which begin after Seligman tells Joe to examine her life from a new perspective. In fact, this is directly addressed, as is any other problem a viewer might have with the film, by the film itself. It is as if the film knows everything that is wrong with it before you do. This is von Trier’s way of insulting his own work before critics have the chance to do so. This film knows what it is and what it wants the viewer to get out of it. The tricky part, as the conclusion shows, is that if you are old enough to be able to watch this film, then you are also old enough to figure it out all by yourself. Just because a film keeps explaining itself to you, that does not mean you have to trust everything it says.

Nymphomaniac is definitely unlike any other film I have ever seen. However, being different and provocative do not necessarily make for a quality product. It just makes you, well, different. The good thing about Nymphomaniac is that it is not provocative for the sake of being provocative.

For a drama with a lot of sex in it, Nymphomaniac is decidedly unsexy. In fact, it treats sex almost like an equation. It uses numbers and dense theories as a way to explain sex. It might be a little bit hard to follow, but it is certainly more inventive than most films, which would probably try to pin all of a character’s problems on one life-changing event that they never recovered from.

Von Trier knows that doing so would just be an easy way out, and he is definitely not a filmmaker who enjoys taking the easy way out, or else he never would have tackled a project like Nymphomaniac in the first place. His direction also elevates everybody involved in the project. Charlotte Gainsbourg and Stacy Martin, who play Joe at different stages in her life, are probably two of the best sports in the world. Even Christian Slater and Shia LaBeouf are convincing here, even if Shia’s accent is completely inexplicable. There is also a brief performance by Uma Thurman, who spends most of her screen time in a fit of anger. She always scrapes the edge of hamming it up but instead, she is so good at conveying the tragic nature of the situation she is in.

Nymphomaniac will be cursed with the label of “that sex film” for a long time. It is not like it wasn’t asking to be defined by that, but calling it such also takes away from a crucial element of what the film is really about: the relationship between storyteller and audience. Rarely does a film structured around flashbacks allow for the listener to be as important as the storyteller. Seligman is not just a psychiatrist sitting there with a pen and paper; he wants to have a real dialogue with Joe.

There is a part when Joe is in the middle of telling her story and she talks about a coincidence that seems too contrived to be true. Seligman calls her out for it.  She then tells him that it does not matter whether what she says is true or not and it would benefit him to just “shut up and believe.” I love that. This is the film’s way of saying that it is okay to trust an unreliable narrator. Yes, a lot of the details of Joe’s story seem too forced to be real, but if we want to be an active participant in the cinematic experience, then it is good to know that the most interesting stories don’t always line up with reality. Life can be pretty boring sometimes.

Nymphomaniac is the kind of film that will be as loved as it is hated. Even as somebody who really liked it, there were many parts that bothered me. Yet, it is so engrossing that it is hard to look away from. Nymphomaniac is what Hunter S. Thompson would describe as “too weird to live, and too rare to die.”