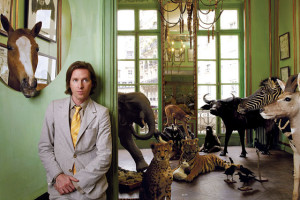 I’m not sure if that horse is dead or alive. Image via New York Magazine

Even if you are a Wes Anderson hater you have to admit: he knows how to make a film, and the fact that he has any unique style at all is something he should be admired, not admonished, for. While he has reached the edge before, Wes Anderson hasn’t become a caricature of Wes Anderson just yet.

A majority of my life (since I was in elementary school) has revolved around Wes Anderson’s films. He has changed the way I see both film and the world itself. I personally think that if everyone had Wes Anderson’s careful eye for little details, then the world would be a much better place. Then again, it would also be a world where adults act like children, and children want to be adults.

Matt Zoller Seitz recently released an amazing book called The Wes Anderson Collection that chronicles all of Wes Anderson’s films. Don’t worry, it has lots of pictures and drawings if you’re not into the whole reading thing. While I don’t think I can do them as much justice as Seitz did in his book, I have been an admirer of Anderson for long enough that it is worth a shot.

With the upcoming release of his latest film, The Grand Budapest Hotel, I figured now was a great time to take a look back at all of Anderson’s films so far. From his humble beginnings, to the moment he completely surrendered to his incredible imagination, Wes Anderson has turned his filmography into his own personal sandbox, where all of the sand castles are decorated in a very particular way.

Without further adieu, here is how I would rank all of Wes Anderson’s films:

The Darjeeling Limited is not as bad as many people would have you believe. However, it is the one Wes Anderson film that feels like a stereotype of a Wes Anderson film. It has the dysfunctional characters, the dysfunctional family, and the incredibly detailed set design. However, once it ends, it just feels empty. It doesn’t feel the characters have gone through anything, even though they have. India sure is pretty to look at, though.

Note: This is the short film that gets shown before The Darjeeling Limited.

Bottle Rocket is Wes Anderson’s first film. This scrappy yet memorable debut tells the story of a group of scrappy yet ambitious wannabe criminals (the debut of Owen and Luke Wilson)  living in suburban Dallas. Hey, if you ever grew up in a suburb, you knew the feeling of being bored enough that you wanted to rob the local Barnes & Noble (no? just me?). With Bottle Rocket, Wes Anderson was still developing his voice. The fact that he had any semblance of a voice this early in his career is impressive enough. It is apparent from early on that Wes Anderson knew what kind of a filmmaker he wanted to be; he just needed time to create and develop his Andersonian universe.

5. The Life Aquatic with Steve Zissou

One viewing of The Life Aquatic does not do the film justice. The Life Aquatic is part fantasy, part story of a man coming of age while having a midlife crisis. It contains some of Bill Murray’s finest deadpan work, as well as great supporting performances from Willem Dafoe (who is funnier than you could ever imagine) and Jeff Goldblum (I picture his outfit in this film is what he wears in real life). The Life Aquatic might be Wes Anderson’s most shameless film, as he wears both his influences and imagination on his sleeves. Come for the Portuguese David Bowie covers, stay to watch Bill Murray fight pirates in a way that puts Captain Phillips to shame.

It was inevitable that Wes Anderson would one day go into animation, given that his characters are basically developed cartoons with daddy issues. Fantastic Mr. Fox is simply a joy from the first frame to the last. It does justice to the Roald Dahl classic while also adding a new spin to the tale. I can’t wait for kids of this generation to watch it and then rewatch it as an adult and realize this film is all about existential crisis. It really is something to behold when a film can be viewed both from a level of childlike wonder, and a mature philosophical level. That is how I believe Wes Anderson tells all of his stories.

I saw Moonrise Kingdom three times in theaters because once was not enough and after two times I still felt like I could see it again. This is the film where Wes Anderson feels most comfortable with his own style. The opening tour through the house is mesmerizing. The scenes where Sam and Suzy are on their adventure, from diving into the ocean to dancing to Francoise Hardy on the beach, are magical. Moonrise Kingdom is great at any moment but it is at its absolute best when it slows down the plot and just lets the characters mess around with the scenery. Moonrise Kingdom is the closest Wes Anderson has come to making something that would fit in with the French New Wave, which is something he has been trying to do ever since he made Bottle Rocket.

Rushmore is Wes Anderson’s second film, and still the funniest one he has made to date. It announced the arrival of Jason Schwartzman who kills it as Max Fischer, a precocious teen who is about to get kicked out of Rushmore Academy because he runs every club imaginable at the expense of his grades. Fischer’s journey into uncertain adulthood is scored by the British Invasion, with everything from The Creation (their “Making Time” is the perfect high energy beat to start this film off) to Faces to The Kinks. There is no need to ever adapt Catcher in the Rye (not that J.D. Salinger’s ghost would ever allow it), because this is cinema’s unique, perfect coming of age story.

I couldn’t agree with you more, Eli. This tale of the descent of a family of achievers is so many things at once: an emotional drama, a dysfunctional family comedy, and a tale of redemption. The Royal Tenenbaums is flawless from start to finish, beginning with the hopeful yet melancholy orchestral cover of “Hey Jude” and ending with the sad yet triumphant “Everyone” by Van Morrison. It is just those two songs alone that let you know what kind of film this is. Tenenbaums also contains one of the best ensembles ever put together, with Gene Hackman doing some of the best work of his whole career as the asshole patriarch who gives you reasons to like him.

Everything in The Royal Tenenbaums feels important, from Richie’s (Luke Wilson) paintings of Margot (Gwyneth Paltrow) to the dalmatian mice that Chas (Ben Stiller) invented. In under two hours, The Royal Tenenbaums gives a fully developed story to each member of its gigantic cast, which is no easy feat. Everybody is allowed to do good things, bad things, and ultimately move on from the past. One of the biggest criticisms people have of Wes Anderson is that he chooses style over substance. But in The Royal Tenenbaums, it feels like he loves his characters, from the cheaters to the cuckolds, just as much as he loves the house on Archer Avenue that Royal Tenenbaum purchased during the winter of his 35th year.

I could talk about The Royal Tenenbaums even more, but I don’t want to keep you here all week.