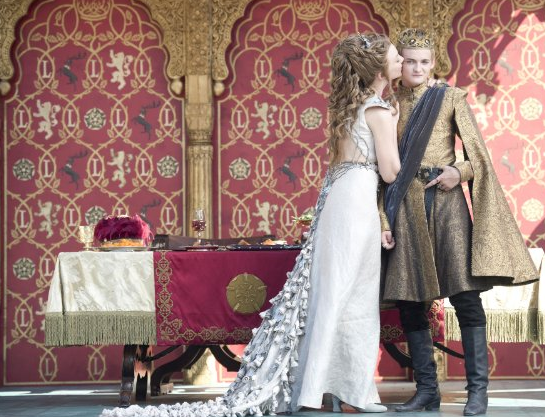 Everybody who is still with me: have you watched the episode?

Can I spoil it for you?

Okay, now that that is out of the way, I am going to spend the rest of this article talking about JOFFREY’S DEATH. It is possible that a lot of this article will be written in caps lock, because after this episode, I feel like my brain is stuck in caps lock. Along with every other Game of Thrones fan, I have been waiting for this to happen since season one. While it seems wrong to ever root for the death of another human being, it never felt wrong to want Joffrey to die. During his run on the show, Joffrey had a direwolf killed, called for Ned Stark’s execution, and then taunted people who’s loved ones perished. Rooting for Joffrey death felt cathartic. This is what Romans must have felt like watching gladiator matches.

This is all a little weird then, given that Joffrey’s death only felt half-cathartic, though half is better than nothing at all. Maybe it is because I built it up so much in my mind and imagined much more insane scenarios for what his death would be. Maybe it was because I just pictured him being cut up into little pieces by Arya. Man, this show really makes a sociopath out of all of us.

This week’s episode, entitled “The Lion and the Rose,” was penned by George R.R. Martin himself. It seems fitting that he would write such an important episode, and while it is easy to complain about the fact that he hasn’t even finished writing the books yet, his involvement in the show is probably why it has remained so consistently good. While Joffrey doesn’t fall to the same sword that took Ned Stark’s head, he does get to die while literally drunk on his own insanity.

What ultimately makes this death so effective is the spectacular buildup to it. Joffrey spends this entire episode taunting everybody that he has a chance to. As the episode progresses, he gets meaner and meaner, and you are more ready than ever before to watch him die. In Westeros, there are some kings who are ruthless, yet good at their jobs. Joffrey was both ruthless and incompetent. To him, being king was an excuse to murder things. He would shoot a man in Reno just to watch him die.

The beauty of Game of Thrones is that it can make you hate a character in one episode, and then like them in the next one. For example, since the end of last season, Tywin Lannister has come off as more rational than ever before. Meanwhile, it is hard not to feel pity for Theon after he lost everything. It is the Clockwork Orange Effect: It is hard not to feel bad for somebody once they stop victimizing people and become a victim, if the cruelty inflicted on them is worse than the cruelty  they inflicted on others. Joffrey, however, is a special case. He was the only character who was never given a sense of love or understanding because he did not deserve it. The end of the Purple Wedding feels like this was a reward for making us sit through the Red Wedding deaths last season.

In just a few short seconds, we watch Joffrey as he painfully exit this world. For somebody who never seemed like he could survive on his own, it is fitting that Joffrey died in his mother’s arms.

Let me just remind everybody that this huge event happened in the second episode of this season. The death of a major villain is usually saved for some point near the climax. The usual approach allows for a satisfying ending and consequences that can be held off until the next season. Instead, Game of Thrones makes this happen in the beginning of a season. A dead king means a whole vortex of trouble is about to open up. The Thrones writers love to take on a challenge. The showrunners run into the danger, not away from it. This might have been one of the most anticipated events in the show’s history. Now that it has happened, it is hard to imagine what could top it. That is probably a probably a stupid thought to ponder, given that Westeros is an ever-expanding world filled with dragons and the undead.

In Westeros, every good deed must be met with something terrible, and the end of tonight’s episode saw Cersei accusing Tyrion of Joffrey’s murder. I have no idea whether Tyrion actually poisoned Joffrey or not. No matter how much he hates Joffrey, it seems like a dumb move for a man who loves to play the political game. Yet, he seemed completely unfazed as the authorities took him away, but that could also be because he was so elated that Joffrey was finally dead that he did not know how to process his emotions. Who will be king now? Will it be Chauncey from Mad Men? This is another narrative challenge that David Benioff and D.B. Weiss will be able to solve.

In the end, I am not even sure what exact point of this article is, which is probably not a good thing. Maybe it is to point out that there can be joyful moments in Westeros, but whether it is joy or pain, that moment will usually revolve around something morbid like death. That is just the world that these characters inhabit. Game of Thrones is the most unpredictable and ambiguous show on television. Nothing is certain in this world, not death, life, or morality.

One thing is certain though: Joffrey Baratheon is a total dick. There were a million ways you could have died, but the way that you eventually left this realm was as surprising as it was satisfying.