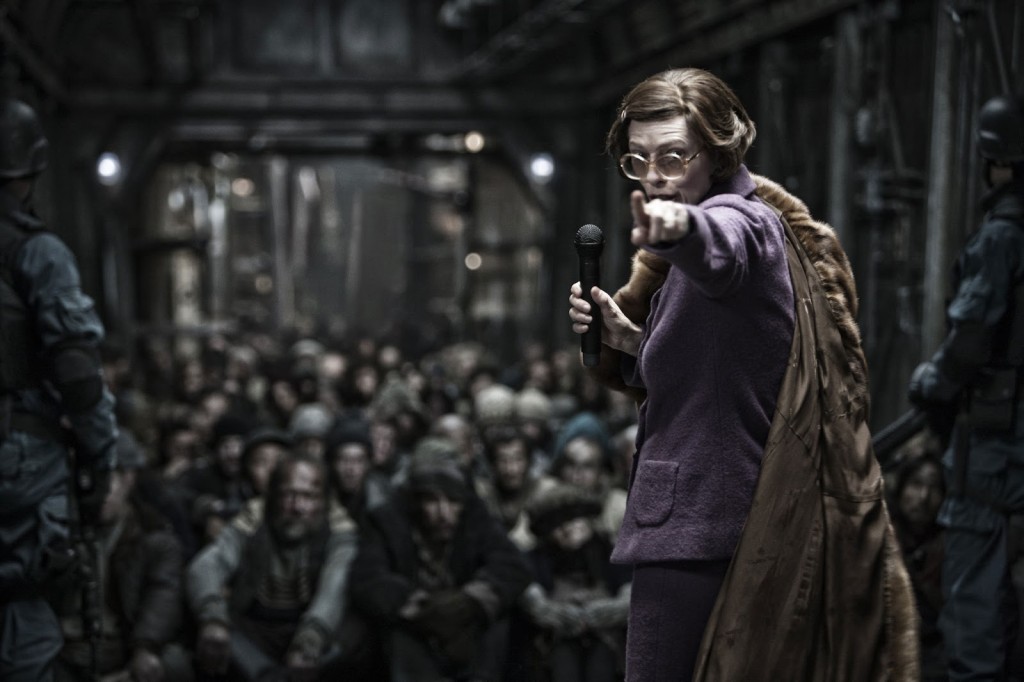 The train is organized like the Titanic, as the wealthiest take the front of the train, and the poor occupy the back. Like an old fashioned caste system, everybody is expected to stay in their pre-ordained position. Conditions are just right for a little rebellion, and that is exactly what happens as Curtis (Chris Evans) reluctantly leads a revolt against the upper class, who have been kidnapping children and feeding the poor with disgusting looking protein bars as the rich dine on steak and sushi.

Snowpiercer is one of those films that doesn’t deserve to be as good as it is. Yet, it is by far the best action movie I have seen so far this summer. While American blockbusters have been trying so hard to appeal to audiences overseas (*cough* Transformers *cough*), maybe American filmmakers should instead pay attention to how filmmakers are making movies overseas. Snowpiercer is a masterclass exercise in action that doesn’t cloud character and story development.

At its core, Snowpiercer is partially that classic story of “The One.” You know that story, because you have all seen Star Wars. That is when some random guy is chosen as the one who is going to save the world from the mess they are all in, even if that one person is going to spend the first two acts of the story complaining about being chosen. In stories like that, often, the other characters don’t mean as much. Everyone in Snowpiercer feels instrumental. This is less a story about “The One,” and more a challenging narrative about how society chooses its heroes. Yet, Chris Evans proves once again that he makes an awesome hero. Curtis is quiet for somebody who is selected to be a leader. Once he does talk, he delivers an incredibly memorable monologue, one that may or may not involve eating babies.

Snowpiercer has an impressive cast, with Tilda Swinton mainly stealing the show as the deranged but often very funny henchman. She works for Wilford, the train’s engineer and the supposedly benevolent leader. I could tell you who plays Wilford, or you could look it up on IMDB. However, the buildup to him is so well done and so suspenseful that it works even better if you don’t know. The less you know about Snowpiercer before seeing it, the better. So, maybe that means that reading this review is pointless. All I can say is that any blockbuster makes me think of class politics and the possible existence of God, and then throws in a night vision ninja fight on top of it, is good in my book. In a different era, people might have waited in line around the block just to get a glimpse of Snowpiercer.