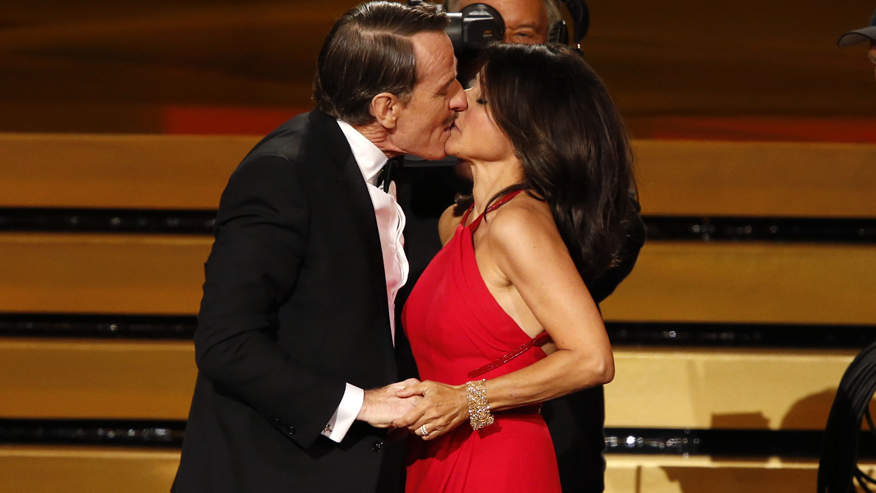 My thoughts are about as predictable as most of the winners. In a year of excellent new shows, the common theme was to tread the same ground. However, that is not saying that some of those winners were not deserved.

Overall, with a great host and some memorable moments, the Emmys reminded me why TV is so great right now, and why film needs to catch up. However, many of the winners last night did not reflect the greatness of television right now. Hold the phone, you’re telling me that an award show is out of touch with what is popular and innovative right now? I don’t believe it.

Without further adieu, here are the highlights and lowlights of last night’s ceremony:

Seth Meyers As expected, Seth Meyers gave a fantastic monologue that makes me miss his presence on Weekend Update and also makes me wish I put in some effort to watch him on Late Night. NBC must be pretty chill, because he mostly just made fun of their poor ratings (30 Rock is over, so somebody has got to do it). Meyers also spent most of his monologue reminding everyone that network television still exists. Speaking of which…

Network vs. Cable vs. Streaming The big theme of the night was that network and cable are now just pawns in a game that will one day be dominated by streaming. Voters decided to teach Netflix a lesson, as they walked home empty handed. Yeah, how dare they take risks and try and elevate the format!

Modern Family Just a few short minutes after Bryan Cranston encouraged everybody to take more risks, Modern Family won the Emmy for Best Comedy for the fifth time. Modern Family was once a great show that is now past its prime. The fact that it wins every year makes me dig deep into the conspiracy theory handbook. As Matt Zoller Seitz said, “Modern Family has dirty pictures of everyone in the Academy.” Sure, you could debate whether or not Orange is the New Black is a comedy, but like it or not, it was far and away the best show nominated for Best Comedy this year. I am starting to realize that the Emmys might not know anything about comedy.

Billy Eichner It wasn’t all bad news for comedy. The amazing Billy Eichner got to showcase his talent with a special edition of Billy on the Street. It is so great to see how far he has come. He deserves all the success he gets.

Julia Louis-Dreyfus & Bryan Cranston They are the king and queen of television.

Fargo It is a shame that Allison Tolman, Colin Hanks, and Billy Bob Thornton went home empty handed. However, I am thrilled that Fargo won Best Miniseries. It is my favorite show of 2014 so far. Fargo did exactly what the film version did: showed me that the world is a horrible place, yet it still managed to warm my heart. For the first time ever, I actually gave a crap about this category. The Coen Brothers might not pay attention to the Emmys, but I hope they know that Noah Hawley did them proud.

Best Joke You Didn’t Hear While engaging in awkward yet endearing banter on stage, Woody Harrelson told True Detective co-star Matthew McConaughey that “[he's] grateful that [McConaughey] got all the plagiarized lines.” This is in reference to the recent controversy surrounding the authenticity of True Detective. The line didn’t get too big of a laugh, but it was a great little bit of self-deprecating humor.

Best Gaffe: Gwen Stefani referred to The Colbert Report as “The Colbort Report” (with “report” pronounced properly). On a scale of 1 to Adele Dazeem, I give it a 7.

Cary Fukunga: Bro of the Century Fukunga’s win for Best Director for True Detective was well deserved. The guy became a sort of star in a very short period of time. It doesn’t seem like Hollywood has gotten to him yet because holy crap, what a bro. He seems like a way less competitive version of Otto Rocket. After the show, Fukunga reportedly called some friends and asked if they wanted to catch some waves at Pismo Beach.

Film: A lot of jabs were made at the expense of movies tonight. Fair enough. However, TV should be nice. Without film, there would be no TV. There would be no Louie, True Detective, or Fargo. So maybe the popcorn is overpriced, but hey, it’s a great excuse to leave the house. Now, give us Matthew McConaughey back.

Broad City You’re still the winner in my heart.