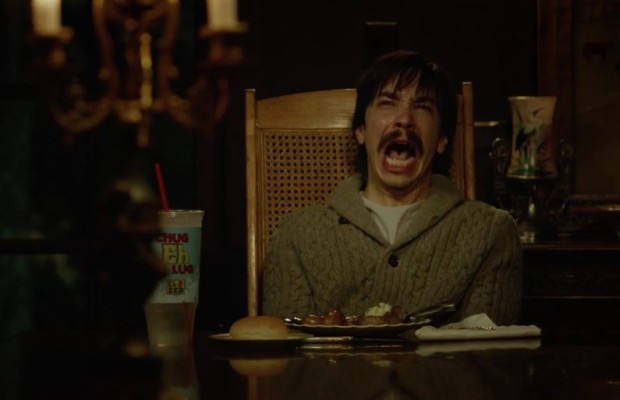 The idea for Tusk was spurred by an episode of Smith’s podcast. So of course, Tusk centers around a pair of podcasters who host a podcast called the Not-See Podcast. Say it out loud. That’s the only running joke this film is able to provide. What nobody told Kevin Smith is that if you have a running joke, you have to vary it a little bit. Yeah, Not-See sounds like Nazi. I didn’t get it the first ten times.

Anyway, Justin Long and Haley Joel Osmont play a pair of mismatched podcasters named Wallace Bryton and Teddy Craft. They host what I presume is the morning drive equivalent of podcasts. The two of them mainly enjoy making fun of people who make fools of themselves on the Internet. One of them is a Canadian boy who accidentally cuts his own leg off while trying to reenact Kill Bill. Wallace makes a trip up to Manitoba to interview him.

Here is Tusk‘s first big red flag: this movie tries to crate a despicable lead character. That is fine, as movies that have a-holes as main characters can be great. However, Tusk keeps telling us that Wallace is a big meanie, yet it never really convinces us as to why. Making fun of people on YouTube is what Daniel Tosh gets paid millions for. And we all know that if you’re rich, then you’re automatically a good person.

A lot of bad things happen to Wallace in Tusk, and it seems like Kevin Smith wants you to believe that he had this coming. But where is the build up. One second, Wallace is in cushy LA recording studio. And the next, he is deep in the Canadian woods with a deranged mad man (Michael Parks) who wants to turn him into a walrus. But the movie never takes anytime to explore his Los Angeles relationships. Sure, a few flashbacks are clumsily incorporated. However, those moments could have been strung together to make a solid first act that would have served as the film’s emotional backbone.

Changes like that could have been made if there had been a rewrite. Now, I have no proof that Kevin Smith didn’t rewrite Tusk, but I have a strong suspicion that he didn’t even bother. Tusk started off as a story Smith and his co-host made up in a podcast episode. I wish it stayed that way. I feel like a lot of the story might have actually worked if it just remained in podcast form. Once you see the actual walrus creation, it is hard to know if you should be frightened or amused. Tusk lingers between horror and comedy. It can never quite decide which one it wants to be. It could have been both, but it doesn’t even want to do that, either. Hey man, whatever will get you that paycheck fastest.

Being so harsh on Kevin Smith, because I am a huge fan. Well, at least I am a huge fan of the Kevin Smith who made Clerks, Mallrats, and Dogma. Being a cinephile at age 12 and then getting to see Clerks is like a revelation. But everything that made him so cool in the 90s seems to have vanished. I hate to say that he’s gone too mainstream, but he has gone from writing politically charged monologues about the Death Star to actually getting to visit the set of Star Wars. In Tusk, Johnny Depp (oh yeah, he’s in it) mentions The Big Lebowski one time and we are all expected to magically applaud. Oh cool, you’ve heard of a movie that we have also heard of! How relatable! With a few Degrassi references to boot, Tusk is a parody of a Kevin Smith film written by somebody who also has a thing for walrus erotica.

While others seem to be rooting for its downfall, I really wanted to like Tusk. I was hoping a guy who helped pave the way for podcasts everywhere might have something insightful to say about it. Instead, Tusk is lost miles up Kevin Smith’s own self-referential ass, in search of an editor.