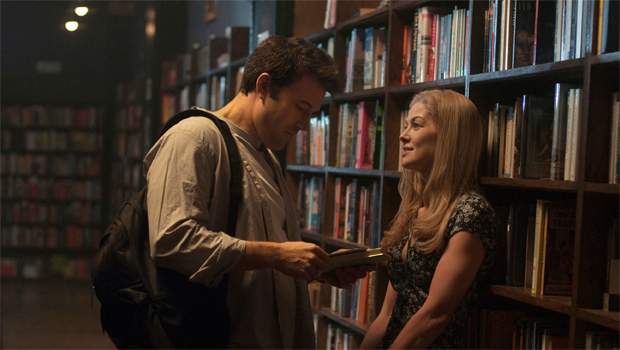 How does one review a film in which describing any single action from it has the potential to ruin the whole story? Easy, we start with a joke:

“The secret to a happy marriage remains a secret.”

Gone Girl is basically what would happen if a Henny Youngman joke was turned into a psychological thriller. With its opening frame, it promises to crack this marriage thing open once and for all and boy, does it deliver on that promise.

Gone Girl is based on a book by Gillian Flynn, a TV critic who was laid off, and then got a book deal. No wonder the story chronicles two struggling writers who fall in love. On the morning of their fifth anniversary, Nick Dunne (Ben Affleck) walks into his Missouri McMansion to find that his wife Amy (Rosamund Pike) is missing. Suddenly, everybody is pointing fingers and accusing Nick of murdering his wife. Based on the evidence, it looks like old Nick might be getting himself into a little bit of trouble.

And that, right there, is the most detail I will go into regarding plot. I am sure that a lot of people already know what happens, because a lot of people have read the book. I am not one of those people, and I will say that going in ignorant made every single twist all the more shocking and satisfying. Of course, twists are ephemeral. The real test of a psychological thriller is whether you still like it on a second viewing, after the surprise is gone. This is why The Prestige holds up better than The Sixth Sense.

About halfway through, Gone Girl pulls the rug out in a way that is absolutely spellbinding. I never thought exposition could be “beautiful,” but Fincher and Flynn prove that it can be if the montage is cut just the right way.

As a director, Fincher is hard to pin down because all of his films are so different. Nearly everything he has directed has been an adaptation, which could make him the Kubrick of our generation (I will probably get yelled at by people for saying this). With twists intermixed with social commentary, Gone Girl is vintage Fincher. It is one of the first great films about the recession. In the same way that Fight Club is about consumerism’s effect on identity, Gone Girl chronicles what happens after the trust fund runs out.

Gone Girl feels like one of those films that might have gone awry if the wrong people were involved. Instead, I got to see the first film ever to make me like Tyler Perry. I got to see Ben Affleck and Rosamund Pike give guaranteed Oscar nominated performances. I even got to see a version of Barney Stinson with a Orwellian nightmare of a house and no awesome pickup line. Everybody involved was cast to play against their usual strengths, and that is why they all deliver career best performances.

Gone Girl fills a serious void during a time when films for people with brains are sparse. It proves that you can be both smart and entertaining at the same time. It asks tough questions and gives no easy answers. It treads on much discussed topics such as Americana and relationships, and proves that Bruce Springsteen and the Before Sunrise trilogy didn’t get the last word in. By the end, you might just hate nearly every character in it. And that is why I love this film so much.

Brain Farts From The Edge/SPOILER SECTION