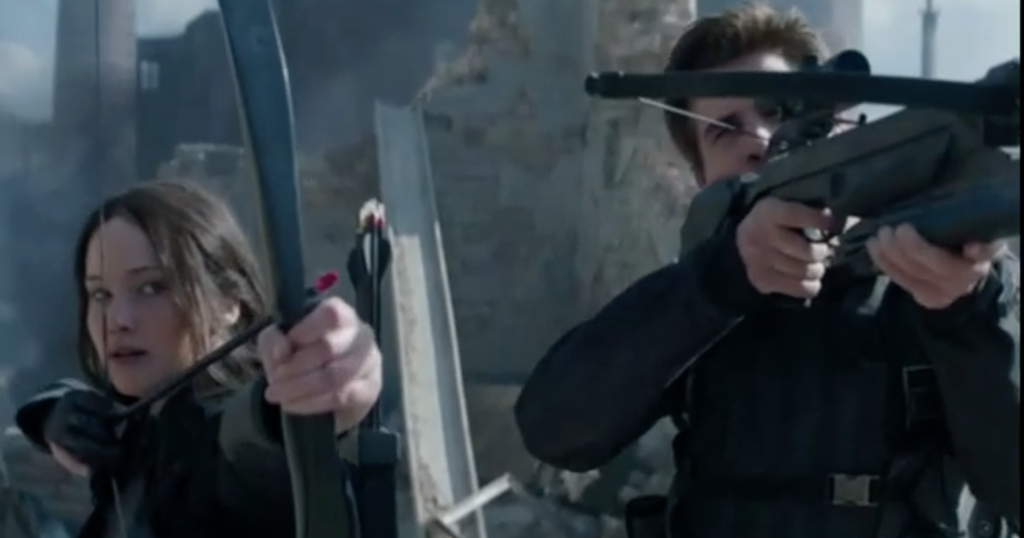 As I settled into my seat for a late Sunday afternoon showing of Mockingjay Part 1, I looked at the crowd seated around me and realized how much power this franchise really has.

Young Adult is typically associated with “screeching sixteen-year-old girls.” That is essentially what the Fault In Our Stars screening I went to looked like. Instead the Mockingjay audience was mix of screaming sixteen-year-old girls, fathers bonding with their sons, couples on dates, and chatty older ladies. So, it is possible to make a blockbuster without pandering to the lowest common denominator.

Mockingjay Part 1 is the weakest of the franchise so far, but that is still to say that it was entertaining, and hey, it was kind of a relief that it was under two and a half hours long. The Hunger Games hit a franchise high with Catching Fire. It was the effect of having less exposition and more world building. Mockingjay leaves off not far from when Catching Fire ended. Chosen One Katniss Everdeen (Jennifer Lawrence) is captured by the resistance in District 13. After being informed that her home of District 12 is destroyed, she finds reason to lead them against the evil government. If I had one major complaint about the series, its that the dystopian government sometimes feels more like a faceless entity that’s protected by dudes dressed like Daft Punk. I understand the idea of keeping things mysterious but if you have Donald Sutherland as the bad guy, you might as well take advantage of it.

Compared to the last two installments, Mockingjay has much less action. Sometimes, this is for the better, and sometimes not. For one thing, Mockingjay seems a lot more interested in teaching lessons about how political propaganda is made in that regard, they are speaking my language. On the other hand, it is a little off-putting when two hours worth of buildup leads to a rescue mission that looks like a mix of Zero Dark Thirty and Call of Duty. That is to say it is about as fun as watching your friend play a video game. It doesn’t feel like they put too much thought into splitting Mockingjay into two parts: rather than restructure the story accordingly, it feels like they literally sliced it down the middle.

The first part of Mockingjay also manages to play to all the franchise’s strengths. Mainly, its expanding world and its characters. Mockingjay focuses more on the possible love between Katniss and Gale (Liam Hemsworth) than the possible love between Katniss and Peeta (Josh Hutcherson) which is too bad, because Gale is kind of boring and its fun to see the short guy get the girl. Lawrence gives us a new reason to call her America’s Sweetheart. At one point, she sings the song “The Hanging Tree” and it seems like she would make an amazing addition to a hypothetical O Brother, Where Art Thou? sequel. Mockingjay also shows what makes Katniss stand out amongst a see of bland YA characters: she’s bold enough to fight and scream until she gets her way, but she is also compassionate enough to risk her own life in order to save her sister and her stupid cat.

Lawrence is lucky enough to work with an ensemble of fine actors. It is great to see Elizabeth Banks’ Effie Trinket get a little more screen time and get to do something a little more than read names. It is always fun to see when a person with so much power loses all of it. Same goes for Harrelson, who deserves his own McConaissance at this point. And of course, there is Philip Seymour Hoffman who as always can convey so much just with a shrug of his shoulders. We are all so lucky to have had him around for as long as we did.

Each Hunger Games installment has largely focused on a certain aspect of media manipulation. The Games themselves are basically Survivor taken to its natural extreme. Mockingjay is about a propaganda war. District 13 hires a film crew to follow Katniss around and turn her into a hero with the magic of editing and music. Mockingjay often has a fun movie-within-a-movie quality to it. One of the propaganda videos that we see looks no different than an actual trailer for The Hunger Games. It is sound editing, not actual heroism, that can change the world.

Despite all of the parts of Mockingjay Part 1 that I enjoyed, I still feel like I only watched half a film. Mockingjay spends a lot of time setting things up only to tell us we have to wait one more year. There is nothing wrong with ending on a cliffhanger (the original Lord of the Rings trilogy was good at that), but it is unsatisfying when absolutely nothing gets resolved. I am excited for the next half, but I also feel like with the “To Be Continued…” sign plastered in between them, half of the momentum has been killed.