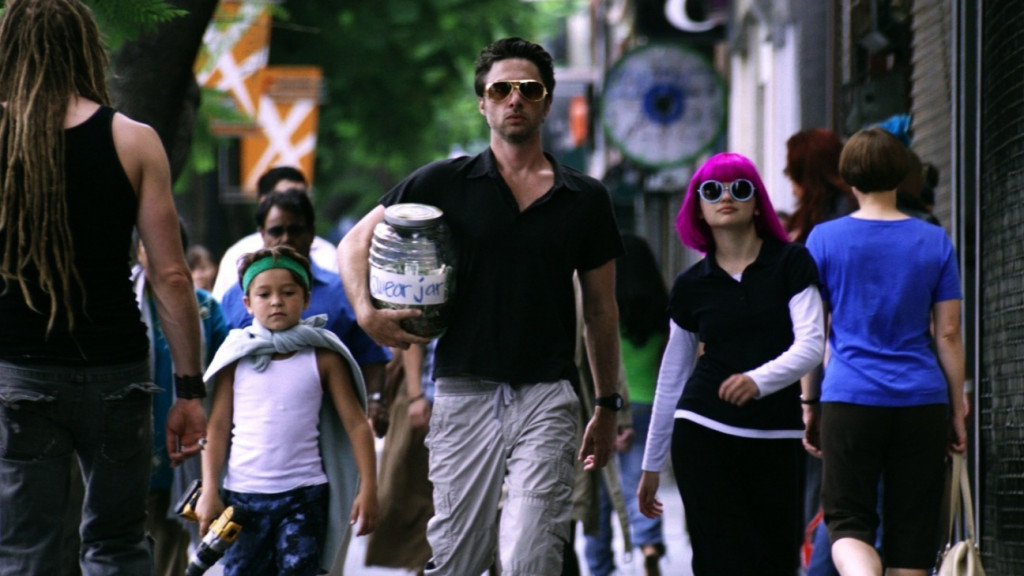 Can you spot all the quirky things about this photo? Image via Hollywood Reporter

Zach Braff has only directed two films in the past ten years, yet he has somehow managed to piss everybody off. Maybe it’s time he gets out of Hollywood for a bit. Maybe he’s getting too much sun, and it’s time to go back and smell the fresh Turnpike air in New Jersey.

Braff’s latest film, Wish I Was Here, plays like a training montage of indie cliches. It’s like they just wanted to point their camera at a bunch of objects for 106 minutes and yell, “look how quirky this is! Do you feel the quirks yet? Do you?!” I could make a list of every little cliche, but that could fill up an entire review.

If you want your character to be at least remotely likable, maybe it’s a bad idea to introduce them screaming at a dog. That’s how Braff decides to introduce Aidan Bloom, a part-time actor, part-time Secular Jew stuck in Hollywood limbo. He hasn’t gotten an acting gig in a long time, as everybody likes to remind him, and the only thing holding him together is his half-Jewish wife (Kate Hudson), who slaves away at a miserable day job. We know it’s miserable because her office is shot with a green tint. Meanwhile, Aidan’s father (Mandy Patinkin) is paying to send the kids to Jewish school, but he is stricken with cancer and can no longer pay for it.

By the way, did I mention that there were Jews involved yet? I feel like Zach Braff just grabbed a “Jews for Dummies” book and wrote down whatever words he could remember. A dog named Kugel? Haha good one! I really wanted to like Wish I Was Here, because I always feel like sticking up for the films with overtly Jewish themes. However, Wish I Was Here manages to take all of the mystique surrounding Hashem and turns it into something skin deep. Think of what would happen if A Serious Man was made with the intent of being a mainstream hit.

Now, what I really loved about a film like A Serious Man is that I saw aspects of my own life and upbringing in it. Remember, this is a film that’s set in Minnesota in 1967, so it couldn’t be any farther from my own life. Instead, Wish I Was Here relies on the Wise Rabbi trope too heavily. Plus, there is a scene where Aidan reads a poem that he claims was his mother’s favorite. It is an excerpt from T.S. Eliot’s Prufrock. Besides being a brilliant poet, Eliot was also an infamous anti-Semite. If you’ve ever had Jewish parents before, then you’ll know that any artist with at least the slightest whiff of Jew-hatin’ is not to be forgiven (mainly Mel Gibson).

The point is that Wish I Was Here is nowhere near as authentic as it claims to be. After his daughter shaves off her own hair, Aidan takes her to buy a wig that’s “unique and amazing like you.” He never, you know, talks to the kid and tells her it’s not the end of the world. Instead, she’s treated like some kind of circus freak just because she decided to shave her hair off. The only person here who seems to have a real reaction to anything is Mandy Patinkin, who truly sells every single line he is given. Josh Gad is also a scene stealer here. And poor Kate Hudson. She deserves a comeback where she doesn’t have to repeat the phrase “half-boner” as much as she does here.

I found myself yelling “shut up!” at the screen multiple times. Braff expects us to be moved just because there is sickness and just because there is triumph of the human spirit. You don’t have to force it so much, especially when Mandy Patinkin could have just worn a bunch of wigs and played every single character. Wish I Was Here has a few, truly nice laughs, and a few emotional payoffs that work but overall, it feels like emotional manipulation gone awry. Just when you think it has come to an original revelation, it contains an ocean metaphor. Wish I Was Here could have been a lot smarter if it didn’t think its audience was so dumb.