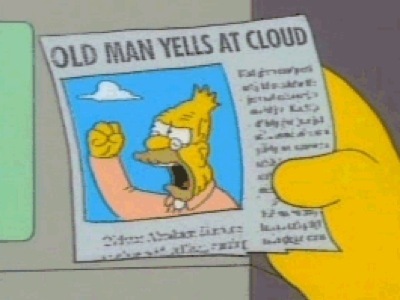 For the second installment of this series, let’s talk about how Rex Reed talks about Gone Girl:

Preposterous, illogical, senselessly over-plotted and artificial as a ceramic artichoke…

I just love the comparison he uses here. What world does Rex Reed live in where “ceramic artichoke” is a common reference that anybody would understand?

At one point, I turned to the woman next to me—a distinguished lady film critic—and asked, “Does any of this make sense to you?” “Not a word of it,” she replied.

BREAKING NEWS: Rex Reed has just confessed to be an obnoxious, unprofessional piece of human garbage. More on this story as it unfolds.

I don’t even want to know what his thoughts on GamerGate are.

The dialogue is so laughable it borders on Saturday Night Live parody.

“What’s a humorous thing that the kids these days like? I want to throw in a random example that this movie has nothing to do with!”

…Nick Dunne (a name that starts the whole thing off on a laughable note for starters; could it be that the author never heard of Dominick Dunne, always called “Nick”?)…

Two people have the same name? Have you seen this? Have you heard about this? #Illuminati

Hey Rex, I’m glad that you finally get to put your high school English education to good use!

I hated his Girl with the Dragon Tattoo, but I usually like the negativity in the dark, clammy subterranean ozone where Mr. Fincher bases his creepiest films (Se7en, Fight Club and the uniquely original Curious Case of Benjamin Button).

According to Rex Reed, Benjamin Button, which was basically a Forrest Gump ripoff, is “uniquely original.” I HATE YOU, REX REED.