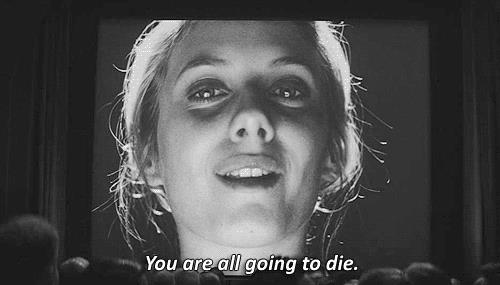 The next eight days are Hanukkah, which is not the most important Jewish holiday, but we do get presents. For each night of Hanukkah, I will share one Jewish character who is important and represents some important aspect of Judaism and Jewish culture. For the second night of Hanukkah, let’s talk about Shosanna Dreyfus of Inglourious Basterds:

A lot of people might not realize this, but Jews have a tough side.

We have to; we have had to go through a lot of shit. From Cossacks to Nazis, a lot of people hate Jews. There are a lot of theories that Jewish comedy stems from all the darkness that we have endured. However, there are some who, instead of laughing, decide to stick up their fists and fight back. I salute those brave souls *does one rep on the bench press; calls it a day*

Quentin Tarantino’s Inglourious Basterds is filled with tough Jews. While the legendary Bear Jew seems like the more obvious choice, there is something that draws me to Shosanna Dreyfus. It might be because coming across a blonde Jew is like coming across Bigfoot or that wolf from Fantastic Mr. Fox. That is the exact reason why Shosanna is able to fit in with the Nazis that rule her native France.

Shosanna is an interesting kind of tough Jew. Unlike the Bear Jew, she doesn’t smash people’s heads in with a bat. Actions like that may defy all Jewish stereotypes of the nebbishy mother’s boy, but they also make us look like borderline terrorists. While Shosanna shows no mercy, she is also very smart about how she targets her enemies.

Early in the film, Hans Landa gives a speech where he compliments Jews by comparing them to rats, while Germans are the hawks. By the end of the film, Shosanna is the hawk, as she traps all the Nazi rats in one place with plans to burn them alive. Plus, she sits down with the man who murdered her entire family without breaking down.

I don’t advocate violence against anybody. However, tell me you didn’t get giddy when Shosanna shouted, “this is the face of Jewish vengeance!”