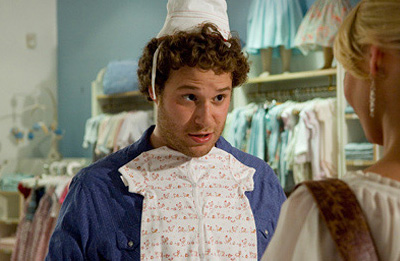 So…Seth Rogen is having a rough week. Have you seen this? Have you heard about this? Before he unintentionally turned America into a South Park episode, Rogen was the most lovable stoner of the 21st century. Hell, as soon as he comes out of hiding he can return to that coveted position.

Rogen has been in show business since he was a teenager, but he never achieved great success until adulthood. Maybe that is why he never became a heroin addict. Lesson learned: that is why you don’t let kids be successful. Anyway, if you ever take a comedy writing class, your teacher will tell you to create a character that’s you but to the extreme. That is exactly what Seth Rogen did with Ben Stone in Knocked Up. Sure, Seth and Ben are both Jewish stoners. However, while Ben is the kind of stoner who does as little as possible, Seth is the kind of stoner that would move from his home country at age 16 to a foreign land called Hollywood to pursue a career in entertainment.

Rogen is a proud Jew, and that is only one of the many reasons why he is one of my personal heroes. His sense of Jewish identity rubs off on Ben. Just to clarify, Knocked Up is not a Jewish movie, it just has a Jewish character in it. There is a difference. Ben Stone is special because he is a different kind of Jewish nerd. He plays video games and love movies but doesn’t have that old school kind of neuroticism. He talks with his friends about how Munich was the first movie to show Jews kicking ass. In another scene, he describes the product that he uses in his hair as “Jew.” Here is a guy who manages to be self-deprecating without being self-hating.

There is a rift between those Jews who talk about the fact that they’re Jewish all the time, and those who think they shouldn’t talk about it because it will make them lose cool points. Rogen has ushered in a new kind of Jewish cool. You can be just like Ben Stone: a wise-cracking idiot who isn’t always sniffling and adjusting his glasses.