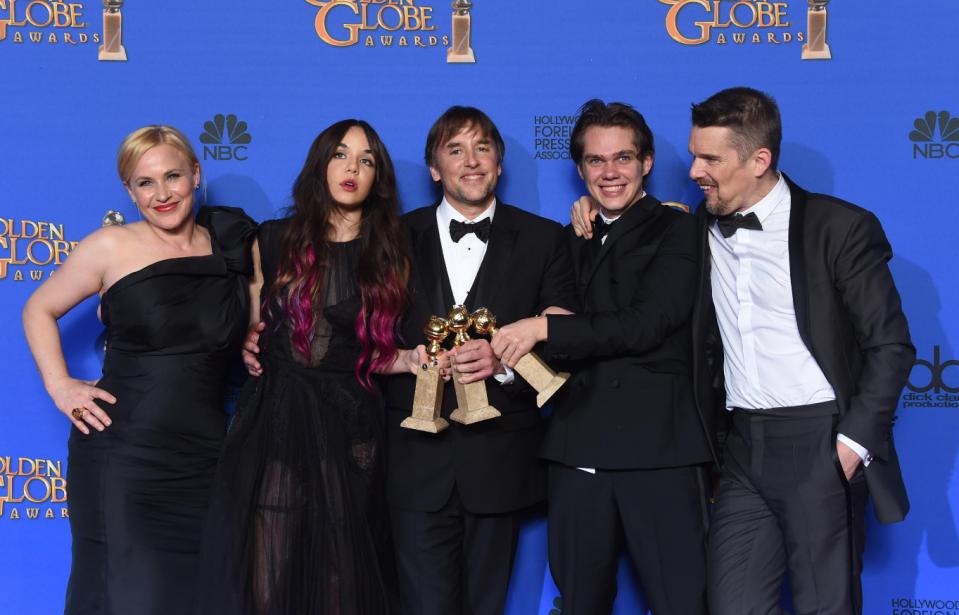 “Does Lorelei Linklater look bored?” “No she’s not bored…that’s just the way her face looks…” Image via Yahoo

I saw some truly deserving winners. I saw some truly headscratching ones, and others that were victims to genre confusion. That is an accurate way to describe about any awards show. However, there was something weird in the air at this year’s ceremony. It probably started when the entire audience couldn’t handle a Bill Cosby joke. But most likely, it was because I felt like I was being judged the entire time by Amal Clooney, who is clearly smarter and more accomplished than I will ever be in my entire life.

I hope you have all recovered from my Pulitizer Prize winning Golden Globes Drinking Game and are ready for the highlight reel. I have decided to put the show together in a neat little package, going through the things I liked and didn’t like about the show. Overall, I don’t really know what to say about a show that leaves Whiplash and Valerie Cherish off the shortlist, but here we go:

Patricia Arquette What a wonderful lady. What an amazing performance in Boyhood. What a deserved win. She is what every Manic Pixie Dreamgirl should be.

George Clooney Clooney is one of the last movie stars out there, which is what people say about every movie star. Clooney received the Lifetime Achievement Award and despite the fact that he is neither dead nor in diapers, he has achieved so much. On top of his great speech was a highlight reel that showed the diverse range of roles throughout his careers. But the most important part of it all: his involvement in South Park.

Fargo It is great to see that this tremendous new show got love where the Emmys missed out. Noah Hawley’s words about kindness were by far one of the most genuine speeches of the night.

Jeffrey Tambor I still have not watched Transparent, but I cannot say enough kind words about Jeffrey Tambor. Seriously, somebody who has had as good a career as he has does not need to be this humble. He is like the kind, wise old man that you would go talk to after you had enough of your own grandparents.

Those Entrances Winners ran up to the stage through this weird, secret passage that resembled the Aztec Tomb. The extra time it took to shoot each one of them confusedly stumbling through it is probably the main reason that the show ran long.

Politics Schmolitics Trans rights. Civil rights. Je Suis Charlie. These are all important topics that deserve exposure, and a platform like this is a perfect place for it. However, once you have Jared Leto preaching peace in Europe, then you know you have a problem. By the end of the night, the ceremony sort of felt like a smug version of “We Didn’t Start the Fire.”

The Lego Movie While I have not seen How to Train Your Dragon 2, I will stand next to The Lego Movie until I am too tired to stand and have to sit down and check my phone once more.

Terrible Chemistry Let’s stop with the random presenter pairs, which were probably made via drunken sorting hat. I never want to have to endure another moment of Jeremy Renner (a fine actor who also happens to look like a loaf of Wonder Bread) talking about JLo’s boobs. This is a real sentence I just typed.

Hollywood’s Reaction to Bill Cosby Jokes Tina & Amy had a few good lines at the expense of America’s creepiest former father figure. The lines were expectadly met with gasps and groans. Let’s not treat it like the two of them were taking a risk and going there with these jokes. It is just more proof that people who attend awards show like the Golden Globes probably have a bespectacled twentysomething check social media for them. PS Hire me!

What I Feel Indifferent About

The Affair As much as I wish that I could rip on The Affair, I have not watched it yet. I have heard some good things about it, but this might be the Brooklyn Nine-Nine of the year: honored before it really hits its stride (by the way Brooklyn Nine-Nine was snubbed this year). Even your mom is upset that The Affair won Best Drama, and it is on Showtime. Showtime is HBO for parents.

Prince Prince is great, but I guess I grew up in the wrong time so I don’t revere him like a god. Therefore, I am just as confused as I am fascinated by the fact that he can get away with getting a category name wrong (he referred to Best Song as Best Score) while making the Blue Steel face. Seriously, is his face stuck on Blue Steel?

Tina & Amy Fey and Poehler are goddesses. Sadly, this is their last year hosting the Globes. However, their lack of screen time gave me an overall meh vibe and–[gets blindfolded and wakes up in Gulag]

I nominate Julie Klausner and Billy Eichner as next year’s hosts.

Disclaimer: There is nothing wrong with celebrities getting behind political causes. Just remember, it’s not what you say, it’s how you say it and for some reason, Jared Leto seems to think he’s a modern Christ figure. Christ figures are for high school English class, Leto.