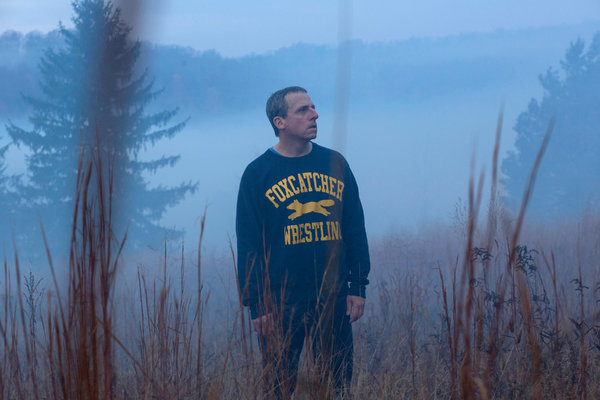 Mark has hit rock bottom and thus he is the perfect target to be taken advantage of by an egomaniac. Enter John du Pont (Steve Carell), heir to the DuPont chemical fortune. John gives Mark an offer he can’t refuse: a lot of money and the chance to lead his wrestling camp at Foxcatcher Farm.

To say that Du Pont was an eccentric man would be the understatement of the century. He had a delusional sense of patriotism and a love for an America that doesn’t exist. If he was still alive today, he would make a great Fox News correspondent. Du Pont had so much time and so much money that he was able to become an accomplished scientist, stamp collector, coach, philanthropist, and gun enthusiast. You’ll never guess which one of these hobbies contributed to his downfall.

Nobody can dispute that Foxcatcher is a beautiful looking film. The stunning cinematography by Greig Fraser captures an imposing sense of Mid-Atlantic seasonal depression. The trio of male leads give commanding performances, with Tatum playing an unpredictable sad sack to Carell’s unpredictable maniac. Meanwhile, Ruffalo’s David feels like the only kind and selfless soul in this world of selfish ambition. Yet, the sadness gets in the way of the film’s ambition.

Sometimes, it feels like Bennett Miller wants to suffocate us with sadness. He did the same thing in Capote, yet this never got in the way of showcasing Truman Capote’s personality. At times, Foxcatcher can feel as overdramatic as Ricky Fitts’ video of that plastic bag floating in the wind in American Beauty. However, there is one scene in Foxcatcher where John takes Mark on a helicopter ride. The two snort cocaine and try to figure out the pronunciation of a certain word. The scene was ad-libbed, and it shows. It is one of the only scenes in the film where it makes sense as to why Mark was drawn to du Pont, and why these two misfits with nepotism issues were perfect for each other. It sort of makes me wish that Miller played the whole film as a dark comedy about excess, Wolf of Wall Street style. The golden rod they use to do blow is symbolic of everything that is wrong with John du Pont’s empire.

Lately, there has been a lot of debate about films that draw on history, mainly with Selma, and what films of this nature are allowed to get right and wrong. I believe you can get as much wrong as you want, just as long as you tell a good story and get to some essential truth. The main issue with Foxcatcher is that it abandons some of the most interesting parts of the story. While we do get a vivid sense of the closed off world that probably led to du Pont’s downfall, his estate served as a museum to his idiosyncrasies, we barely get a sense of his paranoia. Perhaps further exploring his relationship with David would have been a good way to build up at least some tension towards the grand finale. Miller wasn’t looking to make a conventional Hollywood true crime thriller. That is admirable, but there has to be a middle ground between chase scenes and people staring sullenly out windows. Then again, this was the 1980s; cell phones weren’t around yet for people to stare at all the time.

Foxcatcher was a passion project for Bennett Miller, and it shows. It feels like he wanted to remake The Godfather, yet his stance on American capitalism and ambition is too vague. Apparently, a four hour director’s cut of this film exists. I would like to see that. Better yet, this story would have done better as an HBO miniseries. Foxcatcher has some telling moments, but it says a lot when the Wikipedia entry of the story is more interesting than the film that gets made out of it.

Brain Farts From The Edge (SPOILERS FOR REAL LIFE)