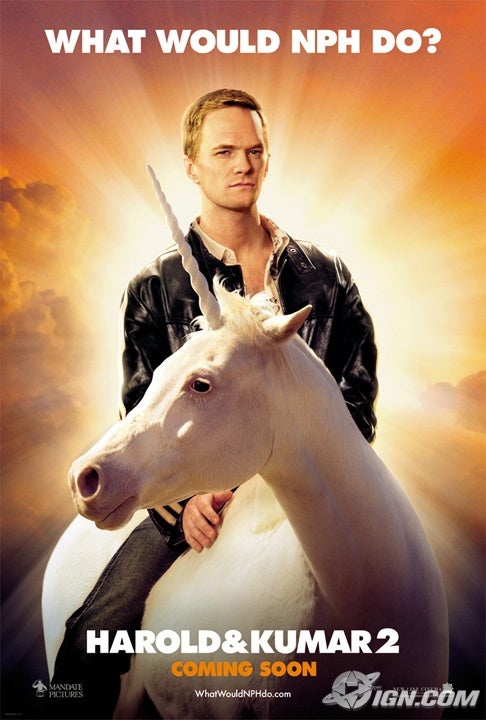 Four years ago, a wacky Asian duo from New Jersey nearly risked their lives in order to have the perfect meal at…White Castle. There, they not only discovered a great meal, but humanity, true love, and the meaning of friendship. Most comedy sequels are totally unnecessary, but this one needed to be made.

The movie begins almost exactly where the first movie left off. Stoners Harold (John Cho) and Kumar (Kal Penn) prepare to go to Amsterdam to chase down Harold’s dream girl (who he’s barely even spoken to. While on the plane, Kumar can’t wait just a few hours till he hits the Weed capitol of the world, and decides to smoke his bong. One woman mistakes it for a bomb and calls it a terrorist attack. Before they know it, the duo is under the care of ultra-conservative/psycho FBI agent Ron Fox (Rob Cordry) and then into Guantanamo Bay. They soon escape, and try to make their way to Amsterdam after they ruin someone’s wedding.
Is this movie better than the original? It’s hard to decide. I think I prefer the original’s more indie and less over-the-top feel. However, this one pushes the limits of comedy even farther than the original ever did. The movie pushes the envelope from the very first scene (I can’t even mention it on this blog without getting in trouble with my parents). Other than that there’s an inbred child and a bottomless party.
At times, this movie is even funnier than the original. It’s political satire is razor sharp if a little over-the-top at times. For example, Cordry’s character literally wipes his ass with the fifth amendment. In another scene, they meet George W. Bush (a close to accurate, if creepy, impression by James Adomian). Yes, he’s an idiot, but he’s also a pretty chill dude. Some moments of satire are pretty obvious (the racial profiling/scenes in Alabama) but others you need to listen more closely to (one character claims his father got a high power position in politics because he was in Bush’s Frat House. Hahahaha).
Despite the fact that it’s a dirty gross out film, it contains much Apatowism (meaning: a comedy which has deeper meaning/morals despite its immaturity). This is found in the friendship between Harold & Kumar. They’re best friends mainly because they are the only ones who are there for each other. However, they couldn’t be more different: Harold is extremely uptight while Kumar is more laid-back and a bit of a screw up. But they realize that true friends are there for each other no matter what. Things can go wrong but it’s always for the better. True friends always say they are sorry.
Now, my final opinion of this film is a bit of an inner battle with myself. I realized after watching this movie that my film opinions are becoming too adult-like. Every once in a while, it’s ok to view a movie just for the fun of it. This is why I’m reccomending Harold & Kumar. For all the gross scenes and cliche, it’s one of few comedy sequels whose plot is totally different from the original and is therefore an original film of its own. It even paints a pretty accurate picture of post 9/11 paranoia and stereotyping. Oh, and Neil Patrick Harris is in it. On shrooms. In one scene he says “It gonna be a bumpy ride”. Harold and Kumar Escape from Guantanamo Bay is a bumpy ride, but one worth taking.
Share on Tumblr